Finding Yourself In a Wicked World

When I was in college, and for quite a few years after, I was a very lost soul. Truth be told, I am still often more lost than found. More chaos than peace. More anxious than calm. It is how my brain is wired, and sometimes it really sucks.

However, in the college years many people are lost and searching for something. Those years between high school and the real grown-up world years are scary. Then as you get older you realize the world is still big and scary, even when you are an adult. While processing all this new adult life stuff you are told things like you need to pick a career and get a job someday. That there is a timeline you must follow. But when you are in late teens/early 20s years you just want to have fun, and be silly and young.

For me that whole real adulting stuff sounded so far away and I basked in the days of college. I was in the very beginning of figuring out the world without a curfew, and picking a career or doing anything adult sounded like just too much, so I didn’t do any of that. I took classes that were required for general stuff and a bunch that sounded fun; and I socialized, a lot. Then suddenly all around me people were doing this declaring their majors thing, and I was like yeah I am going to just do general studies and figure what I want to do when I grow up later. Then two years passed and I had completed all the general study credits needed to graduate from my college. I still had no freaking clue what I was going to major in, let alone be as a grown up. My friends were going to be teachers, lawyers, nurses, and a bunch of other things I knew I just didn’t want to do FOREVER. I was really starting to think this being a grown-up thing was not as fun as it sounded back when I was a kid.

But I was done with the general studies, and I needed to pick classes in something because I really liked college and didn’t want to stop just because I had no idea what I was doing with my life. So began the many majors of Kelly. I majored in anything that I didn’t have to take college algebra to graduate with, because I barely passed all the math in high school and I was not about to take it again if I didn’t have to. I thank you math people out there for doing all the math in this world. I will take great care of all the words.

I would sign up for classes and be excited. Ready for my new adventure. Then I would drop that major after a semester. I was a graphic design major, a theater major, a public relations major, a speech pathology major (for two weeks and then dropped all speech classes and signed up for a bunch of art class to still be a full time student), there are one or two more majors I “declared” but can’t remember now because I never lasted longer than a semester and it has been let’s say 5 years ago (truth: it was 13 years ago I graduated from college).

Every time I would change majors I would be too scared to tell my advisor in that major I was quitting, because what if they talked me into staying? What if I had to get a real job in that field, forever?! That seemed like torture to me when I couldn’t even last a semester in the classes for it, so I went to this magical place called the undecided office. In this office people act as your advisor and help you pick a major. By my second major the staff in that office knew me well. By my fifth or sixth major, the wonderful woman who ran it said, “Kelly let’s see what you have the most credits in and maybe you can graduate with a major in that.”

I got the hint that maybe four years in I should just pick something and graduate. Though I kind of wanted to just take classes forever and maybe work in the undecided office because they were just so nice there. Sadly they weren’t hiring. It turned out I had a lot of Art and a lot of English credits. And that is how I became an English Lit major with a fine art minor. It also turned out the English and Art departments were the two places I belonged more than any other on that campus. I actually wanted to just paint, draw, read, and write forever. The teachers also just wanted to create forever and they got what the creative soul needed.

While I was doing all this – trying to figure out what I was going to do when I grew up stuff – I was also very sick. I kept getting diagnosed with things. First fibromyalgia, then migraines, then I got mono twice with in two years, I had very  serious complications after getting my wisdom teeth out, and I was just randomly sick with anything floating around because my immune system was shot from the mono, the wisdom teeth infection, and the whole socializing not really sleeping part of college.

In all of the majors I declared, I discovered the Art and English departments were the ones that understood how to handle someone with lots of illness best. With the exception of a couple professors I mostly got read this, write this, paint this, and we will talk when you get better. I also had doctors that would write me notes saying how sick I really was if I needed them to so that helped my credibility. My professor knew I had actual health things going on and not just the “brown bottle flu” every time I bailed on class or assignments.

Somewhere in the middle of actually being well and finally finding a major that was sticking, I became a somewhat normal stressed out college student. One day, I  went to one of my professors for a meeting about a paper and fell apart a little. She calmly said, “It is OK, everyone needs a mental health day. Take some time to decide what you are going to write this paper about and don’t worry about coming to class later.”

It was exactly what I needed to hear. In the constant chaos that was my life, I needed an adultier adult who had been doing this adulting stuff much longer than me to tell me it was OK to not be OK. That is was OK to take time to make sure you are mentally healthy. Even with that it took me a good ten years before I actually found a therapist to help me become mentally healthy, and even now I still struggle. Because I still have fibromyalgia, a bleeding disorder, and migraines (and have been diagnosed with a bunch more stuff). Because the world is hard and cruel. Because it takes more than a year or two after graduating high school to know what you want to do when you grow up. Because there isn’t a magic timeline everyone must follow. Some of us know at age 6 what we are going to be when we grow up and some of us don’t know on our death bed. Because sometimes you are meant to take lots of paths. Because sometimes you don’t have one career forever.

I didn’t know what I really wanted to be until I was in my late 20s. Even with the English degree and all the signs pointing towards writing, it took me 28-30 some years for it to dawn on me that making up stories and maybe telling a few that are very real and very hard was my calling.

If you feel lost, it is OK. As one of my favorite quotes from J. R. R. Tolkien says, “Not all who wander are lost.” Sometimes you have to go out in the big wide wicked world and explore. You have to get knocked down. You have to make mistakes and sometimes bad choices. You have to find the beauty and grace in the chaos all around. Sometimes you make lots of great choices that are completely different than what you thought you would ever do. Even with all that you may still feel like you have yet to find yourself. It is OK. Life is meant to be wandered through. It is meant to be explored and dove into deep. You find peace, and lose it again. And for the lucky few, peace holds tight it never leaves. Sooner or later the wandering will bring you exactly where you are supposed to be. 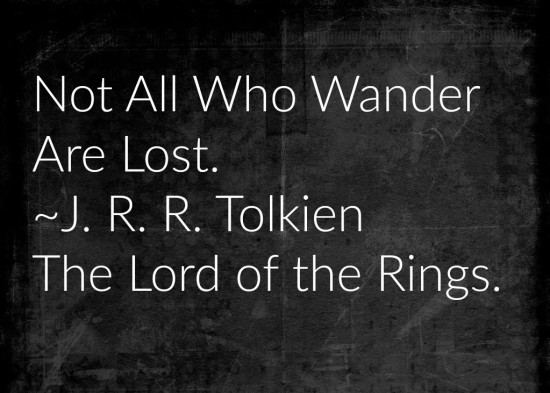