My Son Could Have Choked On His Blanket – Parents, Please Read This

We’re in the “cry it out” stage of parenting.

We did it with our oldest. The middle child was some sort of sleep angel and started sleeping through the night at around 6 weeks. But the baby. Our boy. He doesn’t like to sleep.

I realize it’s probably my fault. He is a perfect baby. Happy, huge, cute as ever – all that good stuff. But he likes to wake up 4 or 5 times a night, because he knows his mama will come rock him.

But I’m tired. I’m so tired. And my husband is tired. So we started the cry it out thing.

It’s working. He’s only waking up once a night now. But Saturday evening, during a routine cry it out session, he gave us a huge scare.

It was 7:00 p.m. My husband and I were in the living room and our girls were playing. We put our little guy in a sleep sack, placed his favorite blankey near him, turned on the monitor and walked away. He proceeded to fuss a bit like usual. But after 15 minutes, he still wasn’t calm.

“I’m going to go check on him,” I told my husband.

But when I went to check, I didn’t hear the crying anymore. So I glanced at the video baby monitor to see if he had fallen asleep. (No one wants to wake a sleeping baby, right?) The screen showed him awake with something strange near his mouth. At first glance, I thought it was vomit. But then I looked closer and realized it was his blanket. In his mouth.

I ran in and pulled the blanket from him. This is where it gets scary, guys.

Look at this photo. 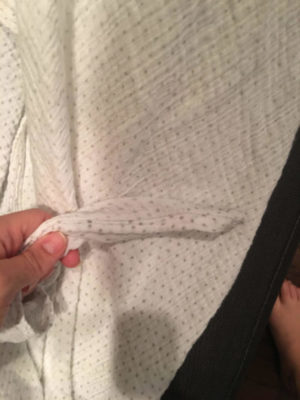 That’s how far the blanket was in his mouth. He wasn’t just chewing on it. No. He had it in his throat, 5.5 inches down.

I had to pull it out of his throat. Think about that for a minute. He could have choked.

What if it was night? What if I thought the silence meant he was sleeping? What if I wouldn’t have checked?

The what ifs, you guys. That’s what terrifies me.

He was fine. I was fine(ish). But now I’m sharing this warning for you.

Here’s my truth. His sisters slept with a blanket. They just did. I realize the American Academy of Pediatrics urges parents to, “avoid use of soft bedding, including crib bumpers, blankets, pillows and soft toys. The crib should be bare.”

And after reading this story, I agreed. My guy would not have blankets with him.

But he likes a little something near his face or on his head. So I let him have a blanket until he falls asleep, and then I take it out of the crib.

I won’t anymore. From now on, no blankets while he is unsupervised. Period.

I’m not here to say blankets are bad. Far from it. I love his soft linen blanket. But it’s very easy for him to roll into a log and suck on. That’s dangerous. So I won’t be using a blanket at nap or bedtime anymore.

Here’s the truth. I realize I may get criticized for this piece. I prayed about it. I talked to my husband about it. In the end, I know the haters will come out. I don’t care. I can deal with the haters, because I know I’m a damn good parent and there isn’t any person in the world who can make me change my mind on that one.

But I can’t deal with the knowledge that keeping this information to myself could put another innocent baby at risk.

The mother-daughter relationship is complicated. This collection of stories by moms currently raising teenage daughters will inspire you to work on your bond with your daughter.

Your Teen Guide for Parents is on its way! Be sure to check your spam folder or junk mail (Gmail users - check your promotions tab).