The night was darker than usual. The moon was gone, waiting to be reborn in the new moon. I sat waiting. I hated the dark. I hated the waiting. This was stupid, a mistake. I could hear the footsteps coming down the path.

I tried not to breathe.

I tried not to move.

The footsteps were so loud, then they stopped.

Barely moving I laid down on my stomach, and peered under the door of the mausoleum. I had thought I was fortunate to find one unlocked, now I wasn’t so sure. My heart beating fast, I looked. Nothing. There was nothing. I heard a tap, quiet at first. Then louder and louder until it became a banging on the door. I was letting my imagination get away from me. It had to be my friends messing with me.

“Just tell them you aren’t scared. That you know it is them,” I told myself over and over.

But the words were stuck in my throat, and pounding on the door clamored on. I peeked under the door again and still saw nothing. That seemed odd, I should have seen their feet if they were banging on the door, right?

I sat up again and heard a sound that froze me to the spot. A whisper, faint but clear.

I swung open the door as I yelled, “This isn’t worth it guys. Dare over! I am going home!”

I expected my friends. I expected something. Instead I was greeted by the dark night, and nothing. Fear crept in. If no one is out here, who made the sounds? It was my friends, of course it was my friends. They were just making the sounds from somewhere else, somewhere they could hide quick. That was it, there is no other reason.

I quickly walked down the path. Trying to keep the fear down, trying to stay calm. If I could get to the edge of the cemetery there would be more light from the street lights. Then I could just go home and be done with this night. Then I heard it again. The foot steps in the distance behind me, from the where I had just been. From where there had been no one. I forced myself to look over my shoulder expecting to see someone. My friends coming out of their hiding spot, saying got ya!

Yet again, no one was there. I looked ahead, the exit was close. I walked faster. The steps picked up behind me coming in quick, and suddenly they were right behind me. My heart nearly stopped, but it passed by me. The gush of wind from the whatever was making the steps running by me made a slight breeze, moving my hair. I froze, nothing was there. Nothing, not my friends, not a stranger. Something invisible just ran by me. I ran, fast. Faster than I ever had run before. I didn’t stop until I got to the gate.

The heavy lock that they had broken to get me in for the dare was back. Fixed as though it had never been broken. I was locked in. The caretaker must have noticed the broken lock and put a new lock on. A lock that looked exactly the same as the one we broke. I scanned the area for another way out. Then I heard it again, the phantom footsteps. This time slowly coming from the edge of the cemetery, walking through the dead fallen leaves that coated the ground. I started climbing the gate.

I climbed and climbed, desperation pushing my forward. I was almost to the top of the eight foot gate. Then I felt it, the hand grabbing my ankle. It pulled me down fast. I tried to scream but an invisible hand covered my mouth. I was pulled back into the dark cemetery. Kicking and trying to scream, still unable to see my captor.  Then everything went dark.

The next morning five of Mia’s friends came to get her. They had been impressed she made it all night, none of them had ever made it all night. Mia was the last to take the dare, they didn’t think she would last 10 minutes. They wandered around the cemetery looking everywhere, unable to find her.

In the days that followed, a missing person report was filed and a search began. Yet Mia was never found. Her friends knew something had happened to Mia there, something bad. The police didn’t think she had stayed in the cemetery that night. They were searching other leads; maybe she had run away, maybe she was taken. No evidence lead them to pursue the cemetary, so they moved on.

A month after she disappeared her friends decided to hold a private memorial for her. The five of them met in cemetery, in the late afternoon. None of them had the courage to go to the cemetery at night anymore. They all had decided something happened to her that dark night in the cemetray. They all had tried to get the police to investigate more, to no avail. That day, a month to the day she disappeared, they each lit a candle in her memory. They said a prayer for her safe return. They were blowing out the candles, getting ready to leave, as the old caretaker walked by raking leaves.

“You friends of that missing girl?” he asked.

“Yes, how did you guess?” one of the teens replied.

“I just heard a little of that prayer you were saying. Sad thing, young girl like that going missing. Funny thing, a few days after the search party came through, I noticed this angel statue here. Could have sworn it wasn’t here before, but it had to have been. It has been worn in places from the wind and rain. Anyway, we’ll be locking up soon, you all need to be heading on your way,” he said.

“Strange, that statue kind of looks like Mia,” said the friend, the others agreed as they left the cemetery.

I screamed and screamed as they walked away, but none of them could hear me inside the statue.

No one ever heard me. 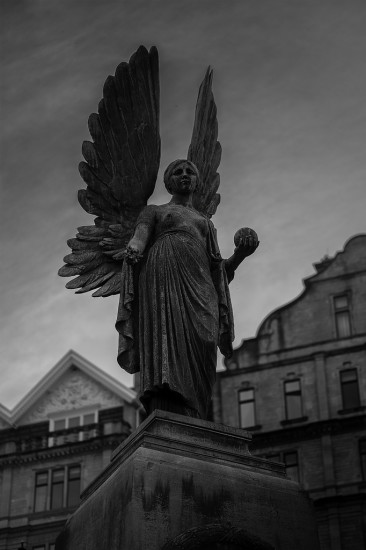