Being a mom is messy, it’s hard work, it’s the most beautiful chaos. But sometimes, it’s a little hard to see that beauty through the basket of 100 unmatched socks. I have six kiddos, my oldest is six, and no, there’s no twins. I learned these hacks the hard way, through desperation and caffeine, so that you don’t have to. And, what I found out, is that basically simplifying life and making things accessible to my children makes life easier for everyone. Here’s my top ten ways to uncomplicate this mom thing.

1. Stop with the Snacks – Does your child complain at meal time? Is he picky? Do your kids snack all day? Do you spend all your time in the kitchen? Then just stop snacks for awhile. When things start to spiral around here, I cut out snacks. My kids don’t go hungry, they just actually eat during meal time. And then, wait for it, they appreciate my cooking and the hard work that goes into it.

2. The Shoe Box – It doesn’t matter if you have one child or ten, getting your kiddos ready to leave the house is enough to drive a mom to drink. One way I found to make it a little easier is to create shoe boxes. I cut the flaps off a diaper box, and made one box for the kids’ tennis shoes and one box for their dress shoes. So, anytime we are getting ready somebody grabs the box and the kids take their shoes out from there and put the empty box back in the garage. Then, when we get home, the box is ready and they can just throw their shoes back in. Because honestly, I don’t know about your kids, but mine will never be the type to neatly arrange them in a row on a shelf. 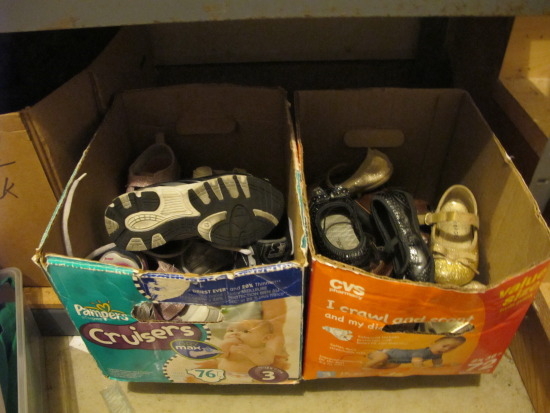 3. The Sock Box – Well yes, to be fair it’s exactly the same as the shoe box idea but with socks. HOWEVER, wait for this, you can say goodbye to the single sock pile forever. All 6 of my kids’ socks are in this bin. When I do laundry, I throw all the matched pairs and singletons in the bin and the kids grab their socks out when they are getting ready. The next time I do laundry, as I’m dumping in the new socks, I can see if there are any matches and put them together. I keep this in a spot that is accessible to everybody, and by that I mean, a place where my kids can get it and I don’t have to help them. And uh, yeah…..I’m really behind on laundry right now. 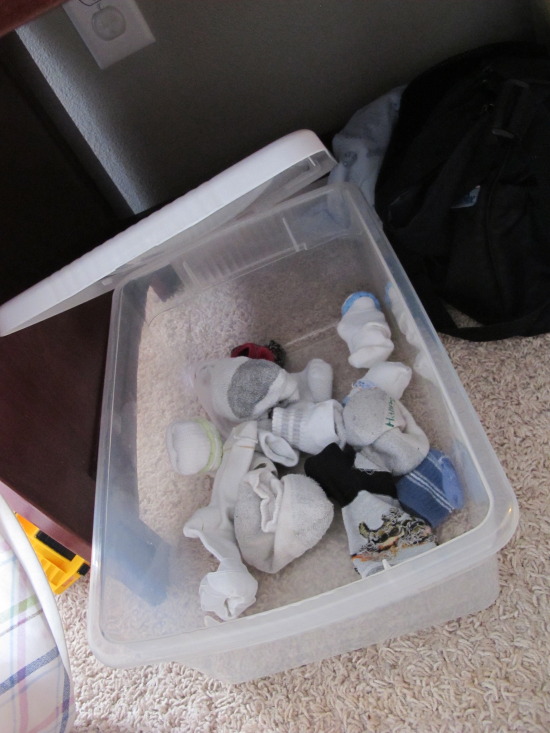 4. Pajama Hooks – I got so tired of seeing pajamas strewn all over the floor, on the stairs, in the bathroom, on my bed….six pairs of pajamas, it’s a lot of visual clutter! So, we created these pajama hooks with a leftover piece of wood and some easy screw in hooks. In our house it works to have this on the wall near the laundry room and kid level. In the morning they get dressed and hang up their jammies for the next day. When I’m ready to wash their pajamas, I throw them in the laundry and hang up new ones for them to use that night. You could easily put a hook on the back of the bedroom door, or on your child’s wall, but part of the genius of this idea is that it’s accessible even if your child’s room is not. So if you are doing laundry while your kids are sleeping, you can still swap out pajamas without waking them. 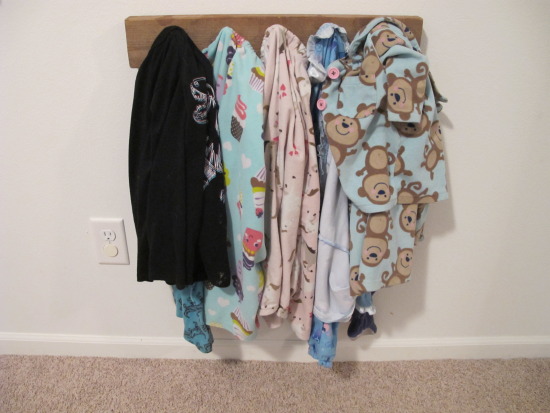 5. Community Dresser – Speaking of the whole laundry while your kids are sleeping. I got so tired of the giant piles that sat on my table because I could never put them away. When my kids were asleep I wasn’t gonna sneak in to put away their clothes, when they were awake there was no way I could get 2.7 minutes alone to throw things in their drawers, and after they went to bed the only thing I was interested in was collapsing on the couch. So, that lead me to this, dressers in an always accessible location. All of my kids’ clothes fit in these two dressers, besides the things that get hung up, like church clothes. That means, I can put things away immediately and access their clothes whenever I would like. Seriously folks, this was a total game changer for me!

6. Minimalism – This brings me to my next point. Just get rid of stuff. Think about it, if you halved the amount of toys your kids had, would they even notice? If you got rid of half their clothes, would they care? Stop attaching emotion to stuff, if it causes you stress. If you hate picking up at the end of the day, then just have less stuff to pick up. If you are sick of the mountains of laundry, then have less laundry. This might be the hardest thing to implement, but it is the thing that makes the BIGGEST difference.

7. Have 1 – So, yes, this relates to number 6, but it deserves it’s own number. The science behind the idea is simple. First, of course, fewer things create less chaos. But second, if you have one of an important item you aren’t going to lose it. You don’t lose the only pacifier you have, you would never lose your child’s only lovey. Suddenly, if you only have one, you become much more intentional about taking care of it.

8. Stop Meal Planning – Wait, what? Everyone tells you the way to a scheduled life is to meal plan, to have everything on hand you need, to print out a pretty calendar and fill it up with Pinterest meals. Well, that’s fine, sometimes. BUT, what if you just made do with what was in your pantry and fridge? What if you said, I’m not taking my kids to the grocery store and spending hours planning our trip and menu and grocery list. Sometimes, it is easier to just make do. There’s nothing wrong with beans and rice, and teaching your children the beauty of simplicity.

9. Lay Out Their Clothes the Night Before – So it turns out that your mom was right, laying out clothes the night before DOES help. I pick out my kids’ clothes because I don’t have time for tantrums about not getting to wear the pink tutu with their dinosaur shirt out of the house, but that’s just me. I lay them out under the jamie hooks, so that in the morning they just hang up their pajamas and put on their clothes. They don’t come down to breakfast until they are dressed, and the big kids help the little ones get dressed.

10. Underwear Basket – Ok, apparently I really like the communal bin idea. We keep the kids’ underwear in a basket under the bathroom sink. Why? Because when do your kids need new underwear? After the bath, and when they have accidents. So then, guess what, the underwear are already there! My kids can pick out their own from the basket, and really what does it matter if they wear someone else’s undies. I mean, I wouldn’t share underwear with anyone, but they’re kids, they’re gross and they don’t care.

Rachel Manley is a happy stay-at-home mom of six, six and under. A Nebraska native, she now lives in central Iowa where she often craves Runza, Valentino’s, and Papa Ray’s Pizza. Once a middle school math teacher, she decided to stay home after the birth of her second child and hasn’t looked back…very often. She spends her days reading board books, pushing swings, building train tracks, and giving hugs. By the grace of God Rachel converted to Catholicism in 2004, and soon thereafter married her high school sweetheart. She strives everyday to do the little things, as St. Thérèse did, and to live her life pleasing to Him.