14 Things to Say to Your Teen After a Breakup

It’s bound to happen. As kids begin to reach the tween and teenage years, at some point, they will get dumped roughly. There may even be an element of meanness in the breakup that thrashes their heart. They are left crushed, crying, and broken—and moms are there to pick up the pieces.

I’m in it, and I won’t lie: it’s tough to watch. As a boy mom, I’m sharing 14 things to support your son who is roughly dumped by a girlfriend (works vice versa too).

Motherhood is always changing, and as I’ve I witnessed mean breakups, my mama bear horns surfaced in ways I never anticipated. It’s always been a worry of mine that other boys would be mean to my boys, so call me naïve, but I didn’t see the harsh girlfriend dumping coming. I had to brainstorm ideas to help and I’m hoping these tips will help you when you encounter this situation with your own child. 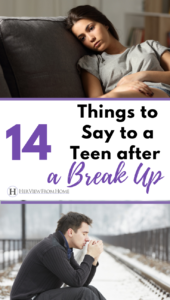 1. I love you.
Remind him you are his mom and you love him.It might not make it better at the moment, but in the long run, it will.

2. You are smart and kind.
Praise your son for his strengths. Point them out. Include words to describe him like he is creative, smart, intelligent, kind, sweet, and friendly. Focus on building him up to help combat bad feelings of low self-esteem resulting from the dumping. If he says only moms say such things, tell him, that may be correct, but that doesn’t mean it’s not true.

3, I’m here to listen.
Be there for him if he has tears and wants to talk. If he doesn’t want to talk, check back later to see if he decides he wants to talk in an hour or so. This tactic has worked for me.

4. Stay away from anyone who plays tricks.
If, during the discussion, you find out the girlfriend played tricks on him, tell him to stay away. If she did it once, she might do it again, and he is better off without her.

5. Forgiveness is good.
However, forgiveness is not permission for emotional or verbal abuse. In the case where she breaks up one day, and wants to get back together the next, be smart and discerning, but don’t be a doormat. Be selective about who to forgive and return to. Remind him he can forgive her without going back to her, and he needs to decide the right choice.

6. Honesty matters.
If the girlfriend dumped him and gave him a reason that turned out to be a lie, he should probably not be in a relationship with her anyway. Lies can pile up and if she can’t be honest, this might be her pattern, so it is good the relationship is over.

7. Communication matters.
When a girl ends it for an untrue reason, such as a false rumor about him without being willing to listen to his explanations, I say it’s time to let go. It’s hard to accept, and it’s a tough lesson, but it’s an important one. I want to stress for my kids that communication and listening to each other is very important in a healthy relationship.

8. It isn’t always fair.
If the girl left him for a reason that is unfair, this is a sign that perhaps she is not mature enough to be in a relationship. He needs to let her go and not try to win her back in this case. If she dumped him for who he is, such as his funny guy personality, or for (tastefully) joking around with friends, she’s not with him for the person he is.

9. It’s not nice to make fun.
If the girl ridiculed him in front of others (or on social media) as part of the dumping, that’s not OK. Making fun of someone else is a bully move. He doesn’t need that in his life. Keep searching.

10. You are worthy.
Tell him he has worth and confirm for him he deserves someone who will treat him well.

11. Be patient.
Tomorrow he might meet someone amazing. Just wait for it. Have patience. He is young; he has many years to find the right girl to have a meaningful relationship with.

12. Be open.
Have hope for the potential of a new relationship. He might consider reaching out to that girl he has already seen, but never talked with before. This person could be huge for him. Urge him to start talking to her, to just try it when he is ready.

13. It’s OK to be alone.
It’s just fine not to have a girlfriend all the time. It won’t stay that way forever.

14. The right one will come along.
Tell him he is special, and the right girl will see that too.

Breaking up is usually rough for the one who is dumped, but as a mom, I can try to soften the blow for my son by supporting him. I hope to teach him to be smart in his future relationships. I will strive to help him understand that meanness should not be a part of any relationship, even from the cutest girl he has ever met in his life.

And above all, I’m here for him no matter what to help protect and support his sweet heart. After all, my son may be getting big, but he is still my baby.