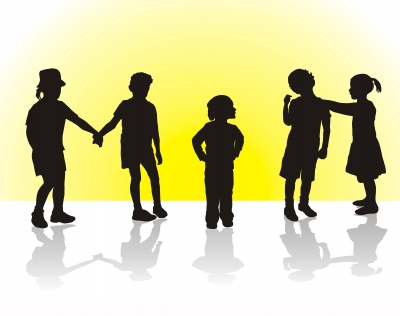 At my youngest son’s four month check-up, I confessed to the pediatrician that I had missed the big “rolling over moment.”  With eyebrows raised in an accusatory manner, he asked me where I was. After I told him I had just stepped out of the room for a moment, I quietly resolved to keep my confessions to myself in the future.

You see, with each new baby, I have become a bit more relaxed. It’s not like I was a totally paranoid, nervous first time mom. But, I had waited so long to be a mom that by the time my twins were born, I really wanted everything to be perfectly controlled.

Jack and Joey each had their own designated color – green for Joey and blue for Jack. They each had separate blankets and a separate burp cloth (in their designated color, of course) which would immediately be replaced as soon as the smallest amount of spit-up would grace the fabric.

I changed their clothes several times a day. If they drooled a little too much, spit up at all, or the tiniest amount of poop got on the bottom corner of one of their outfits, it had to be changed. Pacifiers that dropped on the floor were immediately replaced and set aside to be sanitized by boiling.

Our days followed a routine as well. Morning story time preceded a nap for us all, then mid-morning tummy time, rounded out by free play in the afternoon with classical music playing. More books before bed, some singing, and face-to-face cuddle time ended our day. Since Jack couldn’t nurse, due to his cleft lip and palate, I always made sure that I gave him as much cuddly, physical touch time as I was giving Joey. Frequent walks or outings in the double stroller were a must, and the babies were steered away from strangers’ prodding, germy hands. Of course, I captured it all on film, wrote about it in their baby books, and soaked in every single moment.

I didn’t clean the house or watch t.v. while they were awake. I only did what was necessary to complete our day, like make meals, wash bottles, or fold laundry. I had it all covered, and life was pretty good.

Since my son, Adam, was born when the twins were only 19 months old, I was still in baby mode, only better. I knew each milestone as it was coming, I fed him more nutritious finger foods, bath time was more relaxed, and I had an ever-ready arsenal of baby games and songs. I accepted messes a bit more (meaning he could spit-up at least twice before I would swap out his burp cloth), and he was even exposed to a little television due to the fact that the older boys were now watching shows such as Sesame Street, Thomas the Train, and Baby Einstein DVDs.

But then, I had more kids. And, as if life could get any more complicated than having multiples, it did: more laundry, bigger meals, messier messes. And all my systems and routines and fussiness went right into the pooper (no pun intended).

When Colin was born, and I had four boys under the age of five, I had little time to worry about such things as the cleanliness of a burp cloth or how loud the vacuum was to little ears. Stuff just had to get done. Colin was pretty much enjoying free rein of the house, and everyone was lucky if they received their own private cuddle time with Mommy each day, much less a story.

Now that Baby Evan is here, I confess that I’ve become a much more relaxed mom. The front of his shirt is frequently wet, and a tiny amount of poop gracing that shirt doesn’t warrant changing a whole outfit anymore. The television is on a lot in our house, and I often have to untangle Evan from the vacuum cleaner cord. The only routine he knows is that of his older brothers’ school and practice schedules and how many errands Mommy can run in between. He often has to “cry it out” while I take care of the other boys’ needs, and I don’t mind that he loves to hold strangers’ outstretched hands at the grocery store. And yes, I’ve licked pacifiers and given them back to him.

Although I will never call myself a “Mommy pro”, I do seem more at ease with handling it all. I realize that perfect does not equal happiness and routine isn’t always the best. Sometimes you just have to go with what’s in front of you, even if it is messy or chaotic or fussy. Sure you might miss something, but you just might catch something much more special.

Hubby, the boys and I were at the lake the other day. I had spread a blanket out for Evan (because I’m still a little anal particular about all that messy sand), and the older boys were fishing with their Dad. As I watched them try to pull tangled seaweed off their fishing lines, Evan crawled into the sand. I thought about replacing him on the blanket, but instead watched him carefully so he didn’t start eating the sand. He ran the sand between his fingers and dug in his naked toes, all the time making happy little cooing noises and squeals. It was one of the sweetest things I’ve ever witnessed. A perfect, unplanned, unscripted moment. 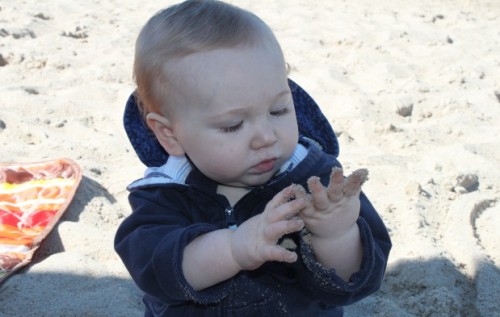 I’ve seen five babies roll over on multiple occasions. But this was a special moment of first discovery, one that I would have missed if I had been overly concerned with trying to control a messy/dirty/non-routine situation. I think getting better at this mom-thing means loosening my reins of control just a bit and allowing my kids to discover the world in their own way. Even if sometimes that means I might be in the other room when a big moment happens.

And I’ll confess to that anytime.