I’ll never forget the day four years ago that I went to the library with my then-18-month-old daughter.

She was bee-bopping around the kids area with no direction but a face-full of enthusiasm, surrounded by a bunch of other giggling toddlers unable to decide fast enough what to play with next.

Mixed in among them were us moms who were grateful to be out of the house while waiting for our turn to referee a sharing fight over the farm animal puzzle pieces.

My daughter was sporting the tiniest of ponytails smack on top of the middle of her head… the style that I affectionately call “the whale spout.” I was excited that she finally had long enough hair for me to do something with other than the classic “headband-that-will-probably-get-tugged-off.” And it matched her spunky personality.

While I was sitting on the floor watching her work the room with joy on her face, another mom who had been sitting near me leaned over and said, “Your daughter is so cute!”

And just as I was about to thank her, she continued, “But you should really consider a bow for her hair instead of that ponytail.”

I don’t remember what I said or how I got out of the awkward moment, but I do remember the drive home. I spent those ten minutes trying to process how someone, let alone a stranger AND a fellow mother, would make a comment about my daughter’s appearance in a way that implied she’d be cuter if I did something else. I took the story to my personal social media page and repeated it in several social circles in the day after, letting the moment’s negative air breathe even more.

It’s a moment I think of often.

Because it was the first time I TRULY remember feeling judgement from a stranger mom. Since then, I feel like it’s all around me like a swarm of flies, whether that’s because that moment exposed me to the reality that it exists, or because our world has just become THAT much more critical.

Either way, I recognize the interaction as a major part of my journey toward discovering my passion for suppressing judgement in modern-day motherhood, and encouraging a moms-supporting-moms movement to grow. And for those reasons, I can convert my anger to gratitude… and believe that mom was placed in my path that day to ignite the fire.

Enter yesterday. I was scurrying around getting breakfast for my now five-year-old, her 3-year-old brother and my 21-month-old little lady, and I noticed that the baby’s hair was starting to get into her eyes.

I smiled… because I knew it was finally time.

I went to the “hair stuff drawer,” grabbed the old stash of tiny rubber bands and gave our girl her first whale spout.

In that moment, it was impossible to not think about my day with her big sister at the library four years ago… and how so much has changed since then. I took a second to contemplate what I would do if the same exact scenario happened today.

My hope is that I would graciously decline that mom’s bow suggestion, and shift the conversation to extending her some sort of kindness that maybe SHE needed that day.

Having had two more kids and a blog full of experiences being on the other end of the judgment gavel since then, I stand a little firmer in who I am and have the awareness to not let those kinds of moments derail me and occupy so much mind space like it did four years ago. I have also learned that I have made mistakes just like that mom did that day.

And most importantly, I know how much kindness and empathy can suffocate the negativity in an interaction and allow positivity to breathe instead.

Because here’s the truth:  it was not that woman’s fault that so much negativity surrounded her comment, it’s MY fault for choosing to let it.

It was my fault for taking the moment’s negativity to my social media feed and the conversations that I did afterwards. It was on ME to recognize that I needed to find a little more solidarity in who I was as a person and mother so that kindness in my heart could have made its way to the surface instead of frustration. It was on me to choose to let that moment exit my headspace after it happened, so that there was more room for positivity to fill it instead.

That woman had a choice that day. But I did too.

Back then, I chose to let the negativity marinate. Today I choose gratitude for the lesson it taught me.

And I also choose her.

And that whale spout.

And the commitment to helping her fill the mind that holds it up with kindness and positivity so she can stand tall in who she is, no matter what she encounters along the way. 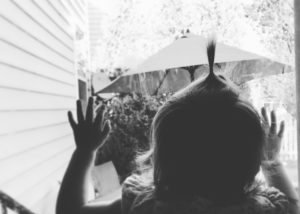 Brea Schmidt is a writer, photographer and speaker who aims to generate authentic conversation about motherhood and daily life on her blog, The Thinking Branch. She also owns newborn, children and family photography business Photography by Brea. She and her husband raise their three young children in Pittsburgh, PA.