Last week I was saddened by an obituary I read in a small-town newspaper. The passing of this individual was, of course, heartbreaking, but the obituary was equally upsetting.

It took me less than 30 seconds to read about this person’s life. This individual needed more than just a few words about his or her time on earth. That’s when I decided to write my own obituary. I think it’s something adults should do every five years.

It’s one less thing our loved ones will have to do when we pass on. This is our chance to have a memoir published for the world to see. Below you will read my obituary. Most of it is true, but I did have to make up the end – obviously.

Leslie was born on a chilly December morning in Hastings, Neb. Her parents, Keith and Linda Waechter, had already done this three times prior. That made Leslie’s entrance a little less scary but still exciting.

She had three older sisters at home. They, too, shared an L name, which made it difficult for people to keep them all straight. She loved her sisters very much, and they became her best friends.

As a girl she enjoyed long bike rides near her parents’ farm. She spent numerous hours on those country roads in rural Webster County. Some of her best memories were made in what some would consider “the middle of nowhere.” To Leslie, those roads were always more than “nowhere” – they were the world. She spent most of her life sharing her love of Nebraska to anyone who would listen to her.

Math wasn’t her strong suit, but she spent hours in books and eventually wrote her own line of children’s books. And even though her 20s revolved around the TV world, she never let it get to her head. Leslie knew she could make more money at the local fast food joint than as a TV personality. That always kept her grounded.

She met less-than-desirable men during college. One got a girl pregnant, another had a bit of a drug problem. When she came across Kyle, she knew she was in for the long haul. Kyle was the most handsome gentleman she had ever met. His demeanor was much like her fathers, which she greatly appreciated. She considered her wedding day, Dec. 31, 2004, one of her greatest accomplishments.

On Aug. 3, 2008 and again on July 2, 2010, Leslie welcomed her daughters, Ella and Grace, into the world. On both of those days, Leslie understood what unconditional love meant. The girls gave Leslie such joy. She considered being a “Mama” the most important and rewarding work. Wow, she loved those girls.

She spent most of her days talking to random strangers through the internet and newspaper. She was always surprised how many people enjoyed reading what she had to say. Leslie often wished she could share her gratitude with those strangers. It meant so much to her.

When her girls graduated from high school, Leslie decided to finally write the romance novel she’d been dreaming about. The novel was so popular; it was made for the big screen. Leslie was thrilled to have enough money to pay off her own student loans. The leftover cash covered her girls’ college tuition and helped her build a dream home on the same country road she grew up loving.

In retirement, Leslie spent most of her evenings watching the sun set over miles and miles of cornfields. If she wasn’t enjoying a quiet night at home with her family, she was hosting a wine party for all of her friends.

Leslie passed in her sleep. Her husband was by her side. She requested, no tears and please, no carnations at her funeral. She would like to make it her final party, with plenty of drinks to serve! She also asked for very little sad music and would instead like guests to hear Bon Jovi, Aerosmith, Boyz 2 Men and Brittany Spears tunes.

She wants all to know, especially loved ones, how much you meant to her. She knows just how blessed she was.

P.S.  Obviously the last few paragraphs were made up. I could estimate the date of my death, but – eh, I don’t think I want to go there.

P.S.S It is kinda cool to know that there is a very, very high chance this will be read at my funeral. It should be like that. In my mind, we should plan our final day down to the last details!

P.S.S.S I hope I didn’t offend anyone with this post. I did a funeral/death segment during my NTV days once, and upset a few people. That’s not my intention. Death is inevitable. Might as well chat about it.

P.S.S.S.S The feature image is from O’Brien-Straatmann-Redinger Funeral Home & Cremations.  These guys are great. I’ve already told them I want my body to be in their hands at the end. They make me smile – and that’s important.

and finally, P.S.S.S.S.S – my editor at the Hub is fantastic. But – he changed a few words around in my column for this week. Um, I had to change it back. You just don’t mess with an obituary – especially when it’s written by the person who is dead! Anyway, if you would like to read the correct grammar version, check it out in the Hub!

Oh wait – one more thing. I am quite serious about NO carnations. Eeew! They are a funeral flower after all. 😉  Let’s stick with zinnias – please? Thanks! 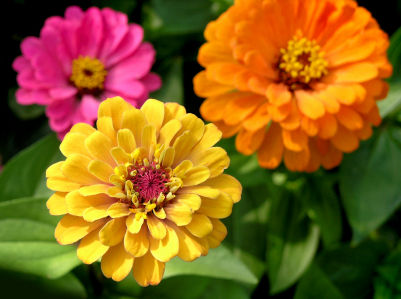