Is it Possible to Be Cancer-Free?

When I first started treatment for stage 3 colorectal cancer back in April of 2014, I thought that these words would mean that my life would return back to normal. Today I will ring the bell, sounding the last of nine rounds of chemotherapy infusions. Then, I am just a CT scan and a colonoscopy from hopefully hearing these magic words. However, I know that ‘cancer-free’ is a nice idea, but not really a practical term for life after cancer.

Just the other day, as I walked by the big mirror in my bathroom, I caught a glimpse of the blue dot tattoos on each hip that the radiation therapists used to line me up for my treatment. I had almost forgotten about them, but there they are, a forever reminder of the 28 times I laid on the table in a tube while my insides were being fried. You and any other unfortunate soul who sees me on the beach or at the pool will see them. And the dots aren’t the only residual gifts left over from radiation, which ended last May. I am suffering from all of the fun symptoms of my radiation-induced early menopause, which may or may not be permanent. Since I am not in the market for any more baby-making (I am already blessed with a son and a daughter), I am actually hoping the hot flashes and night sweats will not be for naught and that the menopause ‘sticks’. Of course, there are other side effects of menopause that are even less desirable than waking up in a pool of your own sweat, but I won’t discuss those here. Suffice it to say that they are unpleasant and decidedly not sexy. 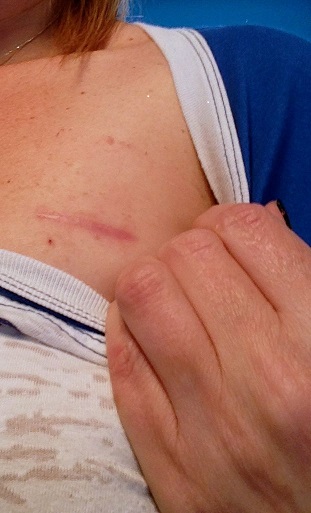 Equally unsexy are the reminders of the tumor removal/rectal re-sectioning surgery I had in July of 2014. I was extremely fortunately to have escaped having a colostomy. Initially at the time of diagnosis, a permanent colostomy was predicted. By the time the radiation did its job, my surgeon was pretty certain a temporary colostomy (and temporary means about six months, which is a very long temporary in my book) would greet my awakening from surgery. Thankfully, he was able to resection my rectum (words I never dreamed of writing a year ago) in such a way that I remained the master of my bowels and did not have to deal with all that goes with having your waste re-routed. For that, I am eternally grateful, and were I able to have more children, I would gladly name them after my surgeon.

However, my bowel functions have not been what I would call normal since the surgery (of course they were not normal before that either due to the cancerous tumor!), and only after I complete chemo and my body has some time to heal will I hope to find a new normal for something no one wants to talk about—unless you have had colorectal cancer, or like me, are a runner, and then you can talk about all things poop ad nauseam without batting an eyelash. 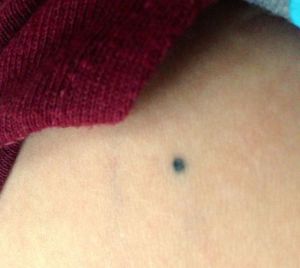 One of two permanent tattoo reminders of radiation

More than blue dots on the sides of my upper thighs or analyzing my bowel functions, it is the fear of the cancer coming back that prevents me from believing that anyone who has had cancer actually can ever live feeling ‘cancer-free’ ever again. It is a fear I and every other person who has survived cancer knows. There are too many stories of cancer making a reappearance to ignore.

Just a couple of days ago ESPN Sports Caster Stuart Scott died after being in remission…twice. And though I have made a conscious decision to not let that fear paralyze me or rule my positive outlook on life, I know somewhere deep inside of me there will be a little piece of me bracing myself for the other shoe to drop. I tell myself that I could easily meet my demise getting hit by a car right in front of my house and that at least if I were going to die of cancer, I could plan for my death and be mentally prepared. The fact is that each day we live is a day closer to death. I plan to make the most of each of those days.

For months, I have been mentally planning my big ‘cancer-free’ party to thank all of our family and friends for their amazing support and generosity during my year of treatments. As I get closer to the end of those treatments, though, I am starting to rethink how I will refer not only to the party, but also to myself. To use ‘cancer-free’ almost seems arrogant when I consider how recurrent cancers have wreaked havoc on others’ lives. If I say I am ‘cancer-free’ am I just tempting fate? And in thinking about how far-reaching and widespread cancer is in all of our lives, are any of us really ever ‘cancer-free’?

Rebecca Wells is still trying to figure out what she wants to be when she grows up. In addition to being a mom and a wife, she has been a teacher, instructional coach, and most recently, the dean of instruction at an inner city high school in Houston, Texas. Due to factors surrounding her treatment for stage 3 colorectal cancer, she has traded a career in education to pursue other passions and interests. When she gets all done with chemo, she will return to running, cycling, swimming, yoga and soccer. Rebecca lives in Cypress, a small suburban community just outside of Houston, where there are fields of donkeys and llamas right down the street from the grocery store, and small trailer parks nestled in between subdivisions featuring homes valued at half a million dollars (she doesn’t live in either one!). She shares her home with her husband, daughter, son, and two crazy, crazy dogs.