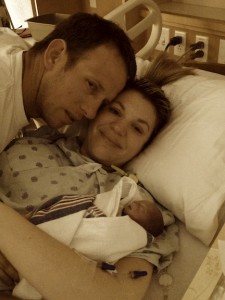 Story originally posted, 2013. To get the latest updates on Stacey and her family, please visit her website at Perfectly Peyton.

I’ve heard it time and time again–the death of a child is the worst grief possible. Over the years, I’ve had my share of grief; saying goodbye to my grandparents, a high school friend, even my childhood dog. But, it wasn’t until this past summer when I felt the most gut-wrenching grief of all. Two of my triplets died in my arms.

You know how you are born to do something? Some people are born to be a leader, others are born to be an athlete. Well, I was born to be a mother. I’ve always had that motherly instinct, thanks to my own nurturing mother. From the sorority days in college to the recent days in a television newsroom, I’ve been considered a mother hen. So, naturally my husband and I were thrilled when we found out in February that we were expecting triplets.

Fast forward four months and I was in the hospital on bed rest. Not an ideal way to spend countless weeks, but I was thrilled that my body was holding on tight to my trio. A triplet pregnancy is extremely high risk, but I never thought the worst would happen. You often hear of perfect pregnancies, so what do you do when everything possible, goes wrong?

It was June 23rd; a day I will never forget. It will always be my triplets birthday, but also my daughter Abigail’s death date. A day that is supposed to be the happiest moment in life, now a day that will forever be clouded with grief. It’s like oil and water, they never mix together. The joy of a birth and darkness of death should never mix together. But for my family, it’s a reality we will always be reminded of, every year on June 23rd.

Abby came out kicking, even making a squeak. It was a complete surprise, since my triplets arrived at 22 weeks and 6 days. The chance of survival is extremely low and most hospitals don’t consider babies viable at that age. And while Abby put up a good fight, she wasn’t strong enough to hold on. At 6:42am, her time of death was called. I laid there holding my beautiful daughter, wondering what could have been. Tears rolled down our faces, as we watched Abigail leave us and become an angel.

The death of a child is unimaginable. Your heart breaks into a million pieces as you ponder what their life would be like. Would Abby be just like her identical sister? Would they like the same hobbies? Would they be best of friends? It’s those questions I will always think about years down the road. 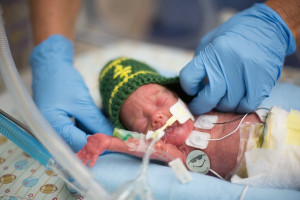 Two months after my triplets were born, I was once again faced with the unthinkable. I had two survivors, Parker and Peyton. People around the world came to know them as P&P. But on August 16th, Peyton lost her other half. After putting up such a strong battle, our son Parker joined his sister Abby in Heaven. Once again, we felt our heart break into a million little pieces. Our lives shattered with the loss of a second child. No one should have to go through the death of a child, especially not two. 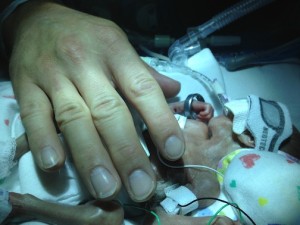 The grief I felt, and still feel, is hard to put into words. My throat closes and tears well up in my eyes at the mere thought of my two angels. And nearly 4 months after they were born, the pain is just as raw as that first day. Some nights, I find myself inconsolable. I wonder what my children would look like as they get older. I wonder if Parker would have been a football player like his dad. I wonder what our family would be like as a happy household of five, not three. Instead, I’m left with a few special memories that I’ll have to hold onto for a lifetime. Things like Parker’s calm personality and his wide eyes, wanting to capture every waking moment. And I’ll always remember Abby’s peaceful look as I held her for a short few hours and her powerful kicks when she was inside my womb. 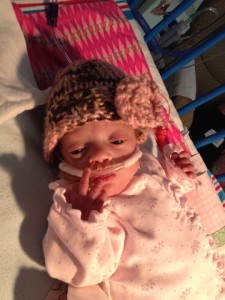 But soon we’ll be making new memories, as we hold onto the old. After nearly four months, our daughter Peyton will be coming home any day now. The days of feeding tubes and isolettes will soon be a distant thought, a blip on the map when we look back years from now. And our grief will change over time. As we look at our surviving triplet, Peyton will always remind us of Abby and Parker. While we don’t have them here on earth, we know her siblings are looking down on their sister, guiding her every step of the way. Peyton is truly a miracle child, lucky to have two very special angels by her side.