**Editor’s note:  We are posting in an effort to help them raise awareness about the dangers in each of our homes. Please only comment with support for this family. Thank you!

This story is not for meant for people to judge us or take pity on us. It is written in hopes to find any one that may learn from it. Anyone that has small children or knows someone with small children. This story could save a life. It could save someone else from the same pain and suffering Winston has had to endure. Something as simple as checking your hot water temperature can prevent something so serious. Please spread the word to all!

December 18, 2013 will be a day I will never forget; a day that will affect my son forever.

It started out as any ordinary day. The two girls were off to school and Winston and I had a lot planned that day. There were several things going on  that winter. Our home was under construction and John (my husband) had been home working on the addition. We also had some issues with the furnace not working. Thank goodness John had placed a radiant heat system in our home when we built it. That was our heat source for the time being in our below freezing Nebraska temperatures.

“John our water is too hot,” I said just the night before as I had said many times before. Like so many other families, the hot water temperature was not set at the correct setting, which is 120 degrees.  Also a radiant heat system uses water as a source of heat.

Little did I know my day was about to turn tragic.

Winston had been sitting up for quite some time now and was very stable. I had been putting him in a shallow bath without problems. He loved to play in the bath, as most kids do. Today I thought I would save time and put him in my bathroom bathtub while I got ready. My bathroom counter is two steps away, what harm could there be in that? 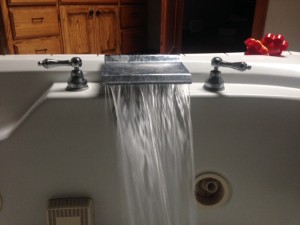 The whirlpool tub in the master bathroom has an oblong waterfall faucet that forces out several gallons per minute. The faucet has one knob for hot water, one knob for cold water. He was splashing around having a good time, laughing. I was getting ready to put in my contacts (blind as a bat without them) and I heard the water come on.

It was like one of those nightmares when you can’t move or speak, but bad things are happening around you.

It seemed as if I were moving in slow motion but everything around me was happening so fast. From that point on my life went in to slow motion. From those very seconds, and still with every day today.

I turned to look and I see him drinking the water out of the faucet. And in my head I am thinking “it must be the cold water if he is drinking it.” I couldn’t really see because I didn’t have on my glasses. I pushed Winston to the side and touched the water with my hand. My hand instantly jerked back with a reddened area on it caused by the extreme temperature of the water. I picked up my son and brought him close to me.

His skin was peeling off of him; all over his body. 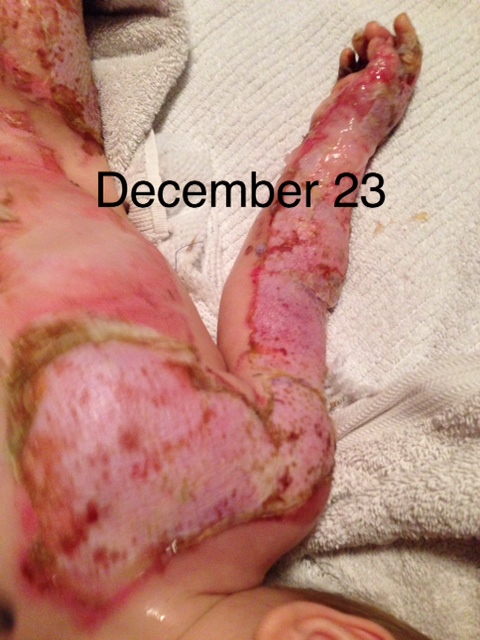 I yelled “NO! No this isn’t happening! NO! I grabbed a towel and wrapped him and ran to the window. John was working on the addition that day and was right outside the window. It took John a minute to realize that I was crying and and trying to yell through the window. “We need to go to the ER now!”

We are 15 miles away from any emergency room; a small town or a smaller town. The closest burn unit is over a two hour drive from our house. We opted to go to Franklin. A fast decision that I think was assumed between the two of us. A good decision in hindsight because it was such a comfort to have the people we know taking care of us.

The doctor said “40% of his body has been burned.”

With my nursing background I knew that 40% on a fragile baby could be life threatening. Right away the doctor called for a helicopter to fly Winston to the nearest burn unit; which was in Lincoln, Nebraska. Minutes felt like hours. It was taking forever for them to respond. John and I were not going to be able to ride with Winston in the helicopter because of the size. We had to send our son alone.

Editor’s Note:  In Part 2, Sara will tell us about guilt, her husband’s reaction to the event, the accusations of abuse and Winston’s recovery. Click here for part 2

Please – everyone check your water temperature. Here’s more about how to do that.