10 Ways To Coexist With a Tween Boy

Nine. My oldest boy flipped the calendar another year recently. And he turned nine. What in the sam hill has happened to the tiny baby who screamed all day and spit up milk like he had ingested turpentine? He’s grown up, friends. And man oh man, can I just say that all those people who think boys are “just like” girls well, they are off their rockers. Because boys, I have three of them. And I’ve spent a fair amount of time around girls. In fact, I am one! But boys are a different ball of wax. Like really dirty wax that is smeared on everything in your house from here to Tuesday.

Babies. I think babies are kind of that. I don’t know that girl babies and boy babies are really that different. They eat, sleep (if we’re lucky), and go through diapers. But somewhere along the line, the small versions of humans that inhabit our house have become boys. And as such, I have received my pin of recognition as a bonafide boy mom.

From casts to stitches to glue to Band-Aids, we’ve amassed a fair amount of self-inflicted injuries ranging from activities such as “riding in the laundry basket while being pulled by a bungee cord” to “slipping on dirt while running to a trampoline.” Because that’s the thing about these boys I am raising, they are balls to the wall 180 mph until they get to empty. They slip and fall and bounce and run into approximately 134 times a day. And then, they get back up and do the exact. Same. Thing. AGAIN.

From messes to boogers to farts to poops, we have seen and smelled it all. And they have giggled about it. Ad nauseum. There is pee surrounding my toilet. Sprayed on the wall. And left for someone else to flush. There has been poop left in the toilet as if it is a trophy to be on display. And the words poop, fart, et al., have resulted in Think Sheets being sent home from school. And when asked why those words seemed necessary, the answer from these boys of mine is and will always be, “I dunno. Because they’re funny?”

And again, the oldest is now nine. Halfway to adulthood (as everyone keeps reminding me). So I find myself, this woman amidst four men in my house, figuring out how to thrive through the upcoming tweendom that seems to be inevitable.

They are sort of weird looking. Their jack-o-lantern chicklet teeth starting to crowd their normal-sized mouths. Their desire to wear shorts all year round seems to trump any sort of understanding that life is not a continuous P.E. class. The amount of days they can wear one pair of underwear, while absolutely environmentally conscious, makes me want to throw up in my mouth a little. And man, they must have theeee strongest eyeball muscles in existence as they roll those puppies all the livelong day.

But then, I can have the very best conversations with the Oldest and sometimes, now, the Middlest. The best bedtime chats. And they still are superb in the sweetness category.

For the mom-in-the-middle, it’s a murky new water to navigate. So what’s a mom to do? How to parent, love, guide, and not lose your gosh darn mind while tackling tween boydom? Here are a few things I’m taking with me in my toolkit on this part of ride . . .

Don’t worry about their laundry.
The Oldest is nine. If he wants to smell, he can smell. Soon enough, some kid in his class will give him a dose of street justice about the fact that he’s worn the same shorts for a week and he’ll have to decide if he wants to change his behavior to not smell OR if he wants to just keep on being the smelly kid. The reality is, at nine, he is old enough to do his laundry, to choose his clothing, and to figure out his style. It’s one less thing for me to worry about and when he’s 30 and looks back at his pictures questioning my judgment, I can remind him that his clothing and wearing the same underwear was his choice.

Keep them busy.
I know. This contradicts EVERY ARTICLE YOU’VE EVER READ ON PARENTING THESE DAYS. The reality is, my kids are busy boys. Not necessarily at structured activities, in fact, those, they only have a few. But they are always outside running around, creating some sort of game, hanging with the neighbors, and keeping busy. I think as they are growing so profoundly and their hormones are starting to take shape, keeping physically active and not being couch potatoes is a total win for them. And in turn, for me.

Give them their own time and space.
When my hormones are going bananas, sometimes, ALL I need is a little bit of a break from everyone. And I see this happening with the one in the middle of growing up. He will sort of put himself in timeout and just read or draw or makeup some sort of game with a ball and I just let him be.

Let them explore. Alone.
I’m just gonna say what no one wants to say. Boys can find themselves intrigued by their parts at a very young age. This does not mean they’ve been molested or are deviant (because yes. I’ve asked those questions). It means that they are having a physical response in their body that makes things well, pop-up. Oh GOSH. AGH. I don’t get it because I don’t have a penis but mama, I think you just gotta do a number 5 and let them know that any sort of activity that happens with their member is not anything to be ashamed of but does need to happen in private. And never with others. I know. Real talk. But believe me . . . there will be a day when you realize that someone’s not just scratchin’ an itch and you’ll thank me for this little nugget. About their nuggets.

Take a deep breath.
There will be a day where your man in the middle says something similar to, “Hey mom . . . so-and-so called me the N word,” and you, as a grown adult will feel steam building in-between your ears and want to go ape on any kid who would talk to your kid like that. But. First. Breathe, mama. Seriously. Every day as these kids we have grow, there will be little and big moments that ask us to be active in parenting and if we lose our cool every time or we blow our top on how dumb that kid is rather than working through the situation, I think our time of bonding and teaching our young boys that language and behavior need to be appropriate and kind becomes overshadowed by our own emotions. We have to show them how not to react. And how to tackle tough situations with our hearts instead of our mouths and hands.

Let them choose their haircut.
These dudes are just attempting to figure out who they are. From wearing long socks with drifit everything . . . accessorizing with stacks of stretchy bracelets . . . wearing an adult cap backwards . . . I mean, it’s not what I thought in my Pottery Barn version of parenting that my kid would be wearing but I’m kind of digging how he pushes so hard to wear his clothing and hair as he wants. If I can give him the independence on the things that really don’t need to matter to me and don’t cause negative issues, I am trying to do so. REALLY. I’m trying. Really. That shaggy hair, I’m totally cool with it. For real.

Listen when they are afraid.
I think sometimes, with my four-year-old, I comfort him when he thinks there are monsters in the closet but I might not really address the monsters. But I do think that our culture sometimes poo poos fear for boys and says that they can’t be afraid because it’s weak. So with my six- and nine-year-old boys, I feel like I have to probe a bit deeper to figure out where the fears are coming from, letting them know that it is 100 percent acceptable to feel those things, and figure out if I can help assuage the concerns. I think that if we neglect that in the growing than when they are older, they might not cope quite as well when things seem scary.

Let them be little.
Boy and girls alike, none of us wants our children to grow up faster than necessary. Whether that means not giving in on staying out “late” just because their friends are starting to or having a phone because everyone else is starting to talk about getting one, I think it is perfectly right to figure out what it means for you to keep your tweens in a good mix of child and teen. And to communicate that to them.

Make a bathroom cleaning kit.
SERIOUSLY. A LOT OF BOYS PEE ON EVERYTHING. This is not because we mamas, or their daddies do. It’s because they pay no attention to where they are aiming their penis and whoops—new splatter on the wall. I made up a basket and a list of cleaning instructions for the bathroom and I keep it in their bathroom. If they don’t want to stop peeing all over Timbuktu, at least they know they’ll have to clean it come chore time. And maybe, just maybe, someday they will learn to aim before they fire. Maybe.

Love them openly.
I believe that boys can be just as tender as girls. They simply need the reminder sometimes of how affection and emotion are human and wonderful. Loving them in your way, mama—whether that is through hugs, making them breakfast, kicking the ball with them, playing MineCraft, Flossing, or otherwise—don’t let their age or stage keep you from loving them and showing them affection.

He’s in the middle. And only going up from here. AND we’ll have two more men in the middle who will follow. They are proving to me that there seems to be some truth to being a #boymom. I am no longer in denial that I will smell urine, sweat, and shmootz when I open their bedroom doors. I have full understanding that everything in my house will be decimated, shredded, and dismantled. I know my backyard will resemble a frat party most of the time as it is littered with balls, nets, red cups, and more. And I am experiencing firsthand that while we will not have to deal with periods and tampons, the hormonal havoc with boys is still very much, a thing. But we won’t just survive it, boy mamas, we will relish and savor all that it is to get to raise tiny boys into young men, and know the battles may be many, but if we choose them correctly, they will be completely worth it in the long run.

To the mamas with the men in the middle, godspeed, and you got this. Plus, the teen years, I’m told, will be a much bigger monster. So we shall remember that we are in a nice little in-between. A nice little moment. Right in the middle. 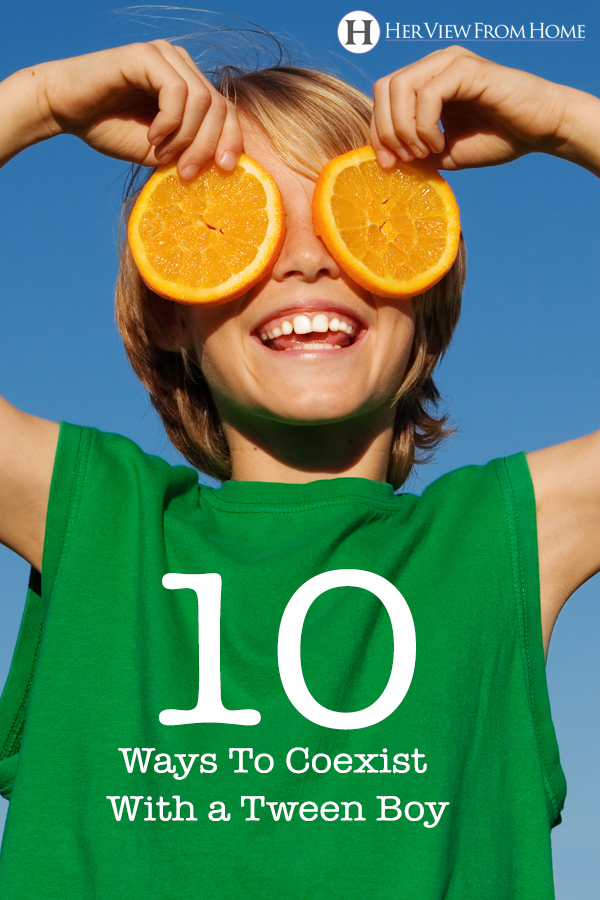