Growing up, I always knew I could count on my older sister, Barb. Even though she was almost four years older than me and we were polar opposites, she always seemed to be there for me when I needed her the most.

Our bedroom was in the attic of our tiny house, and our only bathroom was in the basement. I was too afraid to go by myself, so I would wake her up to go with me. I don’t remember her ever once telling me to go by myself or acting put out about it. She would simply take my hand and lead me down the steps.

I have vivid memories of her teaching me to ride my bike. I didn’t bat an eye or complain when she pushed me over and over down the small hill in our front yard until I finally got the hang of pedaling.

When I was a freshman in high school and she a senior at a different school, she defended me against a bully from her school who threatened to beat me up at Godfather’s Pizza.

Shortly after my twins were born, she stayed with me for a long weekend getting up in the middle of the night, helping me feed and change the babies. She was even by my side as I took that scary first outing with not one, but two babies.

And on that terrible day three years ago when we learned that our precious son, Joey, had a brain tumor, she left work in the middle of the day and drove three and a half hours from her home in Iowa to Omaha so she could be with me at the hospital while we awaited the results of his biopsy.

Even now, living in separate cities, her children all grown and mine still tiny, I know that we have a bond that goes beyond the ages and stages of our kids and life experiences.

That is exactly what I want for my boys. 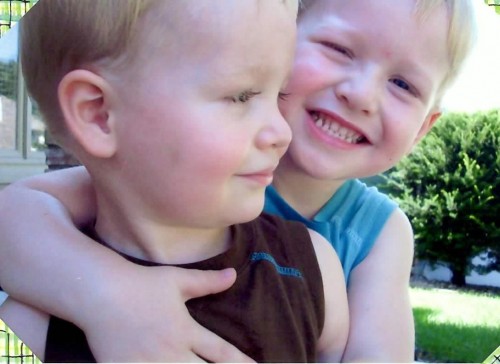 Never in a million years did I dream that I would have five boys. When I was pregnant and learned that both babies were boys, after I was done freaking out about the dirt and the sports and the bugs and the noise, I allowed myself to imagine them together. Really imagine them looking out for one another, having each other’s backs, making discoveries together, being the best of friends, and someday barbequing with their families.

I’ve learned that one of the most wonderful “boy” qualities is their ability to live in the moment. If at one moment Adam is smearing wet mud all over the side of the neighbor’s house, Colin is going to join him. If Jack is creating a massive Lego structure representing a mystical underwater shark universe, then Adam is going to help. And if Baby Evan is having fun splashing in the tub, someone is going to get in with him. And the beauty part is that, quite possibly, two minutes prior to any of these activities, the boys could have been engaged in some sort of knock-down, drag-out fight. But then it’s over, and it’s no big deal. Their bonds aren’t easily broken. That’s another one of the wonderful “boy” qualities that I have come to love.

When Joey was alive, he seemed to be the glue that held us all in place. He was the creator of games, the leader of songs, the great thinker of ideas. He had a special bond with each of his brothers, whether it was his twin bond with Jack, his best friend bond with Adam, or his doting big brother bond with Colin. Once he was gone, I was afraid that the boys wouldn’t know how to keep any of those bonds alive.

But slowly, they have emerged. 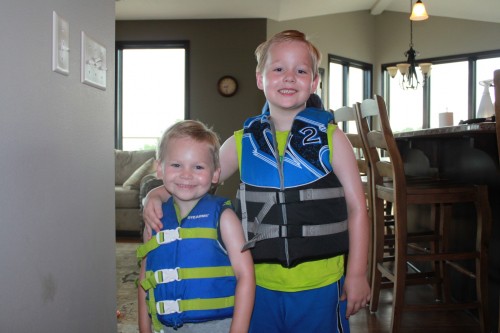 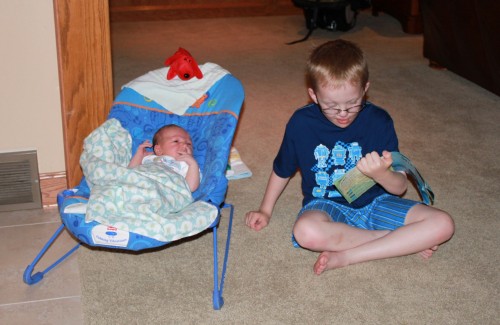 And especially, the “let’s-see-how-much-fun-and-chaos-we-can-create” bond. 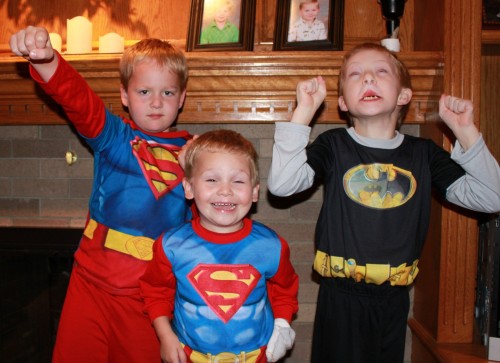 These will be the moments that stand out for my boys when they are my age and look back over their childhoods.

For as much as my husband and I try to teach them, to tell them to look out for one another, I think that will just come naturally. I see it every day when Jack waits for Adam in front of the school building. I see it when Adam offers to share his cookie and doesn’t complain when Colin takes the bigger piece. I see it when Colin is thrilled that his brothers are finally home from school and shows them the cool train track he’s built that morning. And I see it when everyone scrambles to help Baby Evan and to make him laugh.

Last Monday was Grandparents’ Day at the boys’ school, and my mother sent me an e-mail that confirmed what I’ve come to know:

“When we went to play bingo, we could either go to the gym with the kindergarteners or to the cafeteria with the 2nd graders, since we had one of each. I asked the boys where they wanted to go and Adam said: “We’ll let Jack choose.” And Jack chose the gym with the little kids. I thought that was kind of cute – Adam let Jack choose, and Jack chose Adam’s group. At that moment I thought there is great hope for this band of brothers being a close-knit group someday! I think, even though they’re too little to realize it right now, they really have a lot of love and respect for one another.”

The band is emerging and the bonds are strengthening. And that warms this mother’s heart.

In what ways do your children show their bond for each other? 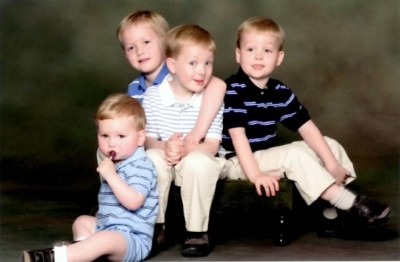