I will never be hired as a motivational speaker. I am far too much of a realist. I was thinking about this personality trait of mine the other day when a friend posted a link to an article about why you should never give up on your dreams. It featured rejection letters received by people who went on to become famous and well respected in their respective fields. The concluding paragraph of the piece was about how we should never give up on our dreams and how rejection should serve as inspiration to keep going until we make it. This person was not speaking my language.

All I could think about were the thousands of people who have received rejection letters that instead of serving as inspiration to keep going, should have been a wake-up call that they were in the wrong field. For every Jewel who slept in her car until she made it big as a singer, there are a thousand unknowns who have slept in their car until they realized they weren’t quite talented enough or weren’t making the right connections to hit it big.

I realized how jaded I am as I was looking for a cute decorative wallhanging for our new baby’s nursery. I will never be the mom who puts up the sign that says, “Reach for the moon. Even if you miss you’ll land among the stars.” What does that even mean? I think I’m going to commission my own more realistic art piece to hang over the baby’s crib that will say something like, “Sometimes the safe choice is the wise choice” or “Settling is underrated” or “Dreams are a pathway to disappointment” or “Failure is life’s way of telling you to rethink your life choices.” You know, something really poetic like that.

I will not be the parent who tells her children to follow their heart or believe in their dreams or that they can be whatever they want to be. When my child is receiving her Nobel Prize she will say, “And I did it all in spite of the fact that my mom thought I should probably not risk so much and kept asking if I wouldn’t be happier in some other field.” When my son becomes president he will likely include in his inaugural address the phrase, “See, Mom? I told you I could do it.” and I’ll blow him a kiss from the balcony.

I know my kids are talented and have much potential and I have no desire to downplay that in their lives. I want to be their cheerleader and supportive of what they want to pursue. It’s not that I think my kids aren’t capable of achieving great things, it’s just that I have seen the power of letting go of dreams in my own life. And I think it’s kind of an important step on the road to maturity and adulthood. The path you imagine is the only way to happiness and fulfillment may not be the path God wants to lead you on. You don’t have to agree with me, but let me explain. 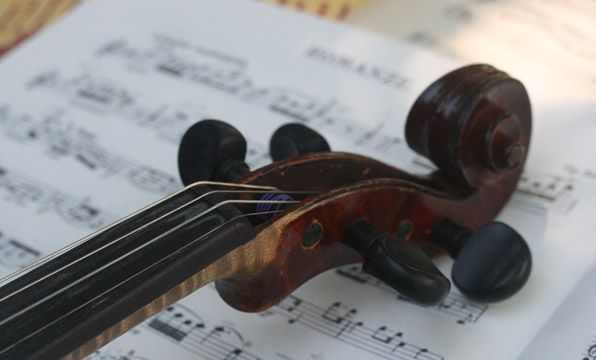 I was a child who grew up in a musical family. My parents were both trained musicians who had made careers out of their gifts. My four siblings and I grew up with music as our constant companion and took lessons in various instruments and also had the natural ability to sing. My younger sister and I at just a few years old were singing duets in front of our large church. In harmony. It was adorable, but also came with a lot of pressure to perform.

Over the years I invested hours in practicing my violin, auditioning for select orchestras and choirs and performing wherever I could get the chance. I loved music and the only future I could imagine for myself involved following my dreams likely to Broadway or Nashville or to a fancy music school.

But in the back of my mind, I hated this dream, too. I felt this obligation to Music. I felt this pressure to BE something or somebody and the only way I knew how to do it was through music. I felt that if I didn’t use this talent to make something of my life, then I had failed.

And if that’s true, then I’ve failed pretty spectacularly.

As I’ve previously mentioned, we are in the process of moving. Which means I have been running across remnants of my former life that were packed away for years. Boxes full of sheet music and folders full of notes from my violin teacher and pages with my dialogue highlighted from “The Music Man” and “Oklahoma” and a tuning fork. While my violin hasn’t been forgotten, it has definitely been neglected. Just going through this stuff feels like opening up a Pandora’s box of guilt and regret for the road not taken and the dreams not pursued. And I refuse to do it anymore.

Why didn’t I follow those dreams? I’m sure part of it was my natural fear of failure. My lack of discipline when it came to the hours of practice time I knew I’d need to invest to make it a career. And probably my natural tendencies towards realism kept me from risking it all. But the reality is that by letting go of that dream, I have found a life that is beautiful. And much better suited to the person God made me to be. 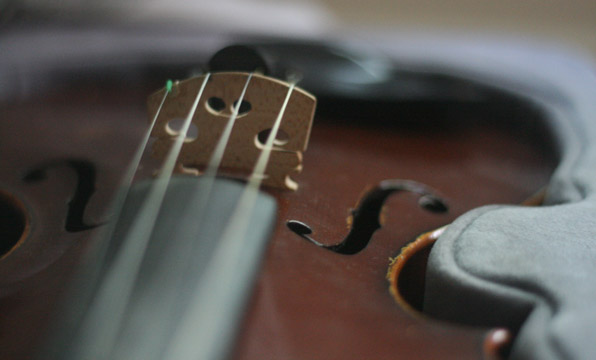 I love my life. It hasn’t been easy, but I have seen God’s hand in it all the way. When I stopped feeling this internal pressure to make something of myself, that’s when I could allow God to make something of me. It was freeing to realize that while I had musical talent, it wasn’t what motivated me. My passion was for children, for advocacy, for fighting the system and making change and making dinners and making a safe and stable home for kids who needed it. Devoting my life to that just happened to squeeze out some of the other dreams I had been holding on to.