Written By:  Amanda – At the Red Table

The other day my husband told me that he was starting to get sick of quinoa. See, I’d made the mistake of making an entire box of quinoa to last throughout the week, thinking we could toss it on salads, mix it with chicken, stir it into soups. I was on a superfood kick, and I could not be stopped.

The thing is, an entire box of quinoa makes a lot. Like, a lot a lot. I knew this in theory, but when faced with the giant heaping mound of the fluffy stuff, I realized we would be eating much more of it for much longer than I’d anticipated. And while trying to consume an entire box of quinoa in a week, there were other foods that were being neglected – some deli-sliced ham was slowly lurching toward its expiration date, some juicy tomatoes were going to get wrinkly any day, a whole carton of eggs sat untouched.

Enter Ham and Cheese Quinoa Cups – an easy, quick way to use up a bunch of already-cooked quinoa and other ingredients I already had on hand – and make sure my husband didn’t get sick of one of my favorite foods. 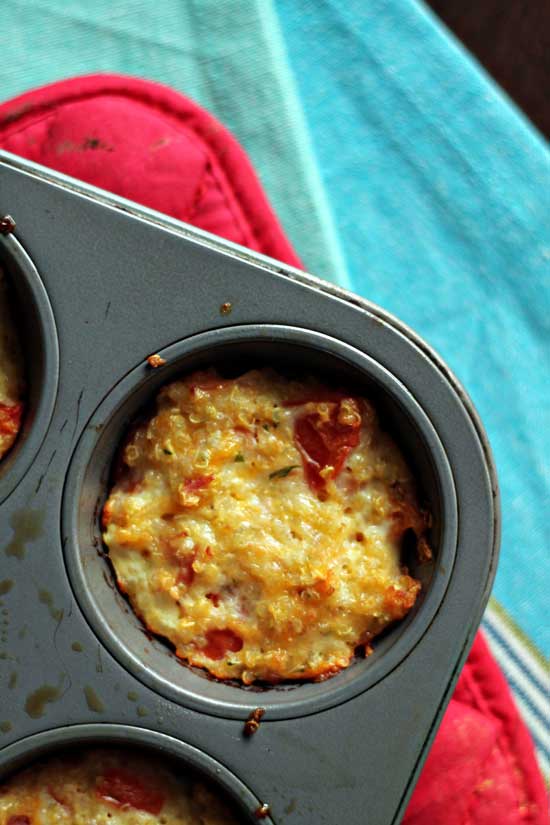 Guys, these are delicious! And so, so easy to make, especially if you already have cooked quinoa lying around. Even if you don’t, the quinoa takes 15 or 20 minutes to cook and you can prep the rest of the ingredients and pre-heat the oven while the quinoa cooks into its fluffy, goldenness. You could really use this recipe as a base for all kinds of combinations, just subtract the ham and cheddar and tomatoes and add spinach and feta and mozzarella, or chicken and Monterrey Jack.

We had no problem eating up the rest of that mountain of quinoa. In fact, I made a second batch the next week.

adapted from Iowa Girl Eats, who adapted it from So Very Blessed

Preheat the oven to 350 degrees F. Mix all the ingredients together in a large bowl. Spray muffin tins with cooking spray. Distribute the mixture evenly among regular sized muffin tin cups. Bake of 25 minutes or until golden brown and cooked through.