Healthy Habits for a Picky Eater

When you head into parenthood a few things catch you off guard. We were prepared for poop, but I never realized I’d be terrified of the utensil drawer or truly appreciate the baby carrier for the miracle it is.

Another thing I prepared for was having a picky eater as a baby, but we discovered the complete opposite. The kid scarfed down everything from kale to lentils for the first two years of his life. I wasn’t expecting that at his second birthday my voracious eater would become a picky guy. His previously favorite foods, including the sweetest of fruits, would become toxic in his eyes. We hadn’t introduced any sweets (he had his first piece of candy well after his second birthday), but still he shunned mealtime.

At first it worried me and I thought I had to feed him whatever he would eat. That led to a couple of weeks of supplemental shakes which resulted in the weirdest poops I’ve ever seen.

Our poo tells us what’s up y’all, so I took this as a sign and changed the game plan. I figured, “He’ll eat when he’s hungry” – and you know what? It’s true. I began insisting we all eat the same dinner and if he refused the healthy choices, he wouldn’t get a processed alternative.

Weekends are a different story. If dad is eating multigrain chips, the mini is allowed them. However, we don’t make it a habit and I don’t offer processed foods.

So, how do we keep our child on a whole foods diet? Here are a few tips I use to keep the toddler eating healthy.

1. Variety! I’ve heard some people suggest that your child has to eat what you tell them they’re going to eat. I believe that to an extent, but I also feel that offering them choices not only expands their palate, it also offers a slice of independence. I want to raise a free-thinker, and if he suggests blueberries over strawberries, we’ll go with what he wants. 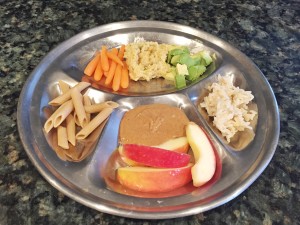 Here we have carrots, chickpea salad, avocado, whole wheat pasta and brown rice, and a favorite – apples with peanut butter. Guess what? Most of the things you see here are actually leftovers and the others were too easy not to add!

2. Snacks! Some people don’t believe snacking is healthy, but I have seen that I eat much more efficiently if I’m allowed healthy choices when I’m feeling hungry. Carrots and hummus, a couple of mandarins, or a handful of grapes or nuts are my favorite. The kid is usually up for a snack when he sees me fueling up so I share what I’m eating. Obviously slice the grapes horizontally and be sure your food is kid friendly.

3. Get them involved! Our little can often be found on our kitchen counter mixing granola or mashing
anything from chickpeas to sweet potatoes. I originally brought him in the kitchen to keep an eye on him while making dinner, hoping it would expose him to healthy habits. It’s now his favorite place to be and he gets upset if I don’t tell him I’m preparing something. Not to mention, even at just two he’s a tremendous help. The kid can just about make sweet potato gnocchi on his own!

4. Make their favorite meals! Let them add their favorite healthy meals to the weekly menu. My little guy loves lentil Bolognese. Heck, anything to do with pasta. Every few days we have a pasta or rice dish because we all love it and because I know he will be into it.

5. They won’t starve! It’s true. I’ve seen my kid go a couple of days without eating much of anything, only to find him chowing down the next day. As long as you offer healthy choices, so s/he can choose something over a less favorite food, s/he will eventually eat.

There are plenty of supplemental shakes and formulas out there that I’m so grateful we have for children in need, but the truth is, you probably don’t need them. Fear often gets the best of us as parents and we act on good intentions and buy things people tell us are best for our children because we are good parents.

So when your finicky eater pushes away her/his healthy meal you thoughtfully prepared, fear not. Don’t get angry, don’t succumb to the fear or guilt, and trust yourself. Perhaps leave the meal on the table after dinner, pour yourself a glass of wine, and know they will eat when they’re hungry.