We are a week away from Thanksgiving! Are you thinking pumpkin yet? We enjoy Thanksgiving at my in-law’s house every year, and this year Carmin asked to make the pumpkin pie. The thing is, I am not fond of the canned stuff and making your own pumpkin pie filling is really easy.

I am not kidding. It is REALLY EASY.

You will need one pie pumpkin, which will yield enough puree for at least one pie, or two cups of filling. Be sure these are the little sugar pumpkins, not the big kind for carving. There is a difference. Most stores will label them as pie pumpkins. Now, I like to cook more than one pumpkin, because this filling freezes really well.

First, take that lovely stem off your pumpkins. If it doesn’t break right off the top, just cut the top off the pumpkin. 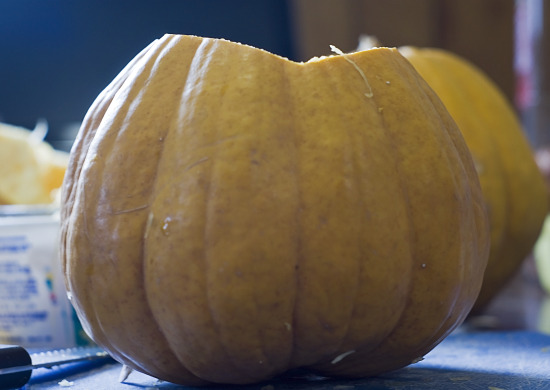 Next, slice that little baby right in half. Scoop out the pumpkin guts and set aside. Later on, clean up those seeds and roast them. Or, set a few aside to dry and plant in your garden. Then, when you have an abundance of pumpkins, you can leave a pumpkin on a neighbor’s porch with cooking instructions. You know… instead of anonymous cucumbers and zucchini.

At this point, I like to cut each pumpkin half  in half again. So, you have pumpkin quarters. Place the pieces on a baking sheet with a rim, cut side up or down…it really doesn’t matter. Bake at 350 degrees for approximately 40 minutes. 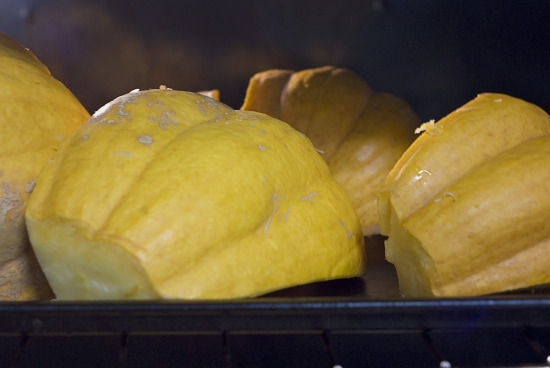 When finished, they should look like this. This also means the skin will pretty much just peel right off. If not, just use a knife to cut it off.

Put all that pumpkin in a large bowl and give a kid a potato masher. Let them mash up the pumpkin. Or, if there are no children available and you don’t feel like mashing, put the pumpkin in a blender or food processor. This is where you have to make some pumpkin assessments. Sometimes, pumpkin can be very watery, and sometimes not so much. You will be able to tell by how it blends. If it is dry, you will need to add a little water to get the pumpkin to mash or blend smoothly. This time round, I had to add water. Sometimes, it is too moist. If that is the case, you will need to take the mashed pumpkin and strain it. To do this, put the pumpkin on some cheesecloth stretched over a bowl or in a fine mesh strainer set over a bowl and let it sit for a few hours. The moisture will drain into the bowl. 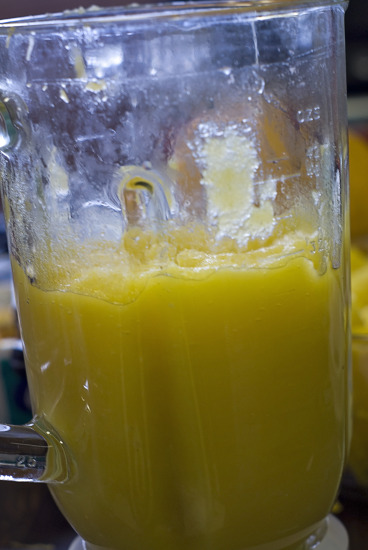 After straining, (if necessary) put the pumpkin in a bowl and add in your spices. Stir them through until well mixed. I baked two pie pumpkins…and ended up with eight cups of pumpkin puree. I like to puree in my blender so I have an accurate measurement and can add the right amount of spices. NOTE: This step is optional. You can freeze the puree plain and add your seasoning later. I will usually do this with one pumpkin. 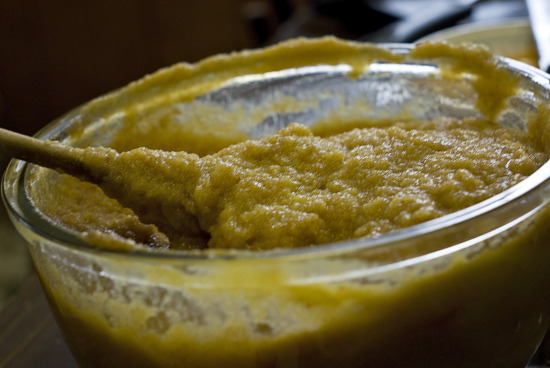 Now you have all this pumpkin pie puree to use right away or freeze. To freeze, place in freezer container or freezer bags in any amount you wish. I like to freeze two cups in a container because that is what my pie recipe calls for. Freeze amounts according to your favorite recipe. If I leave pumpkin puree plain, I like to freeze it in freezer bags in one cup measurements. This is good for all those recipes calling for plain pumpkin, and you will know how much is in a bag. 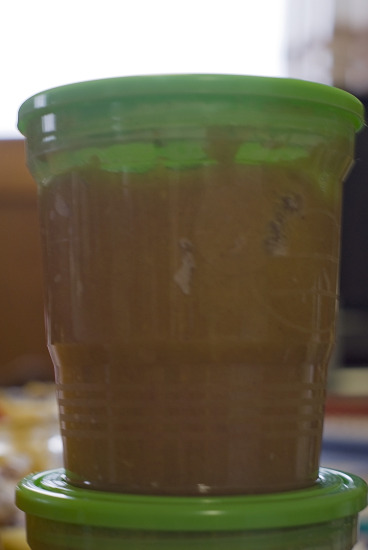