Has someone ever posted a mean comment to something you shared on Facebook? When it first happened to me, I was transported back to my days in middle school where cliques formed and stormed and mean words were the most powerful of currencies. It made me grateful that social media didn’t exist when I was a kid, but then I shuddered thinking how it’s something my young children will have to deal with in less time than I’m willing to admit. I’m socking away my experience for when that day comes.

The comment came from an article I had published on Scary Mommy, one of the big mommy blogs with a couple million Facebook followers and an even bigger readership. My article was a light-hearted defense of my tight yoga pants and the general lack of effort I put into my stay-at-home mom attire, so this was hardly a controversial piece. Still, I steeled myself for the harsh Facebook comments that come with that expanded reach. I was prepared for remarks like, “You’re never going to keep your man, if you don’t put in the effort,” which no one actually said, and, overall, I got off easy. But, there was that one woman who took a single sentence from my 850 word essay and exaggerated it to call me a bad mom. I naively did not see that coming.

I let the comment slide at first. After all, people have endured so much worse from the trolls of the internet underworld, but that woman’s words got under my skin. Her comment was so far off topic. What possessed her to criticize my parenting? It irked me. I took a look at the comment section the next day, and a few people had “Liked” it, but, other than that, it was ignored. That was good, right? Some of the other, positive comments got hundreds of “Likes,” yet no one really jumped on the band wagon to agree that I was a bad mother.

But, also, no one stood up for me. No one said, “Hey, that comment was out of line.” I’m sure most people did what I did at first and rolled their eyes, thinking, That comment’s not worth my time, and that’s valid. We do have to pick our battles. Otherwise, we’d be in Facebook comment battles all day instead of living our real lives. But, also, ignoring the mean things people do, even in the online world, is how bullies get away with being bullies. If no one ever stands up to them and says, “Cut it out,” then the mean things definitely won’t stop.

So, I replied to the comment. Before having kids, I know I would have ignored it and continued to hope that someone would wade into the fray on my behalf. But now, two kids later, my mama bear instinct asserts itself in surprising ways, and I’m more comfortable with confrontation. While it certainly would have been nice to have someone publicly speak out to support me, I didn’t need that external vote of confidence to know that I’m worth standing up for, so I wrote a response myself. 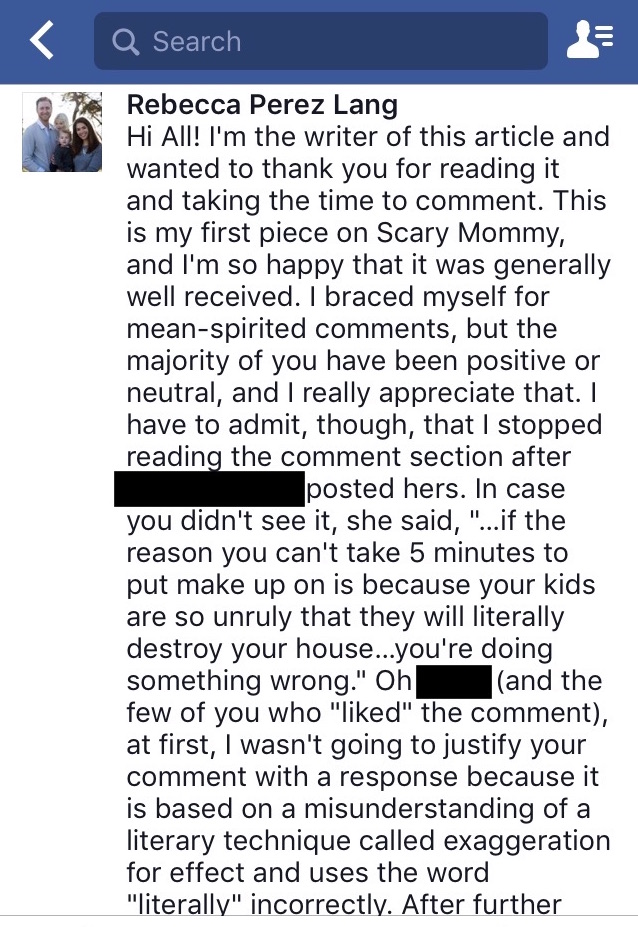 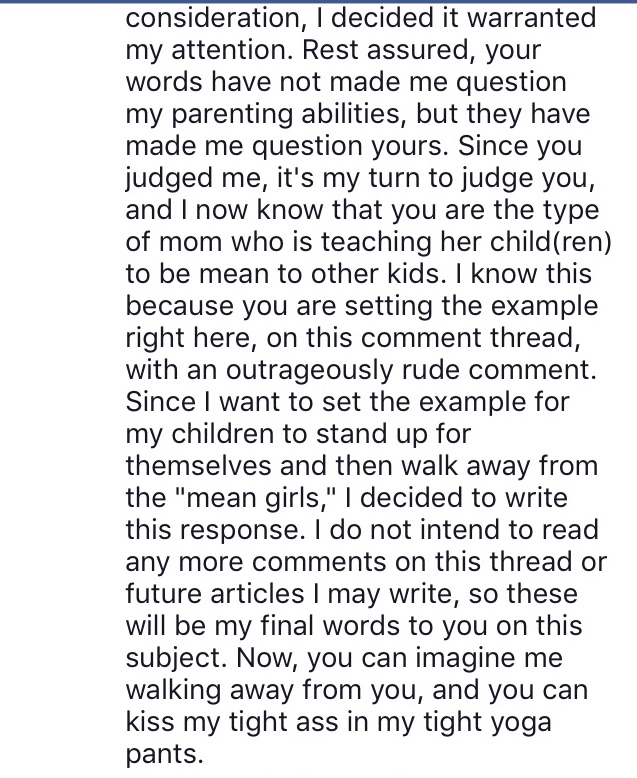 It’s sassy and direct and maybe went a bit too far. My husband and friends gave me mixed reviews. My husband said, “This makes me feel uncomfortable,” which was no surprise since he’d rather change a year’s worth of dirty diapers than get into any type of debate. Some friends thought I should have taken the high road and ignored the comment or killed it with kindness by politely responding. Others agreed that fighting fire with fire was the way to go. I stand by what I wrote, but, also, looking at it several months later, I could have been equally impactful with more class and less sass.

So, that’s what I’ll try to teach my kids, and the best way I can figure how to do that is to set the right example. While I won’t get it right all of the time, I do know what my end goal is. I want them to be confident, to understand that they have the right and responsibility to stand up for what they believe and to have the courage to do it. For me, that meant challenging a rude Facebook comment, so that I held the commenter accountable for her statements and put my voice on record. Words are powerful, and I want my children to use them responsibly. I have faith that they will, and I’ll do better next time, too.

Rebecca is a Jersey girl who now lives in San Francisco with her husband, Eric, and two children. She earned her Bachelors and Masters degrees in Human Resources and Labor Relations from Penn State and worked for two Fortune 500 companies in a variety of HR roles before surprising everyone, including herself, and leaving her job to stay home with her kids. Now, she uses her HR skills in communications, personal development and, of course, conflict resolution to navigate the world of toddlers, stay-at-home moms, preschool, and the playground. https://beckyrebecca.com/