I’m a daughter with a dead mother. I’m a lot of other things, of course. I’m a mom. A partner. A sister. A patient. But lately, I’m just a daughter with a dead mother. It’s a thought that sneaks into your head occasionally when your mom has been battling cancer for 10 years. But I always pushed it away before it was even fully formed. Maybe that’s why I was surprised when it happened. Maybe it’s why the last nine months seem to feel like a lifetime while only lasting a second. Maybe I’m crazy.

“She’s not eating.” I said it for maybe the 100th time that day, the last day she’d be in the home she shared with my dad and had built with him ten years before while she wore a scarf covering her bald head. This wasn’t her first time being sick. It wasn’t her 15th time being sick. She had been battling for so long I forgot what it felt like to not have the “C-word” being brought up daily. But this time was worse, it was stage four, and even though she had far surpassed her doctor given expiration date, I truly thought this was just a bad stretch of days and that she’d be fine. “I need to go to the hospital.” She said it so faintly I didn’t think I’d heard her correctly. The hospital was the last place on earth my nature-path loving mom would ever want to be. So we carried her to the car, oxygen tank and all. I still remember her Chipmunk pajama pants she was wearing. That was weird too. My incredibly classy mom was allowing us to carry her out in public wearing chipmunk pants.

They admitted her, within the first hour of being in the emergency room. She needed fluids, pain medication for the mouth sores from chemo, and monitoring for her oxygen levels. “It’s going to be fine, we just need to get this under control before it gets worse,” I said to each of my four sisters stretched all over the world. “She’s going to be fine.”

That was a Sunday night. By Tuesday morning she still wasn’t fine. We had moved her to the ICU because her CO2 levels were way too high. My experience with someone in that state was zero before that day and I hope I never have to experience that again. It’s like dealing with someone who’s very drunk and constantly confused. She had no idea where she was or why and she was, understandably, very afraid. I wrote it down for her in the simplest terms so she could look at it while she was wearing the giant CPAP machine forcing oxygen into her tired lungs. “You’re safe. You’re in the hospital. This machine is trying to help you breathe. You have to leave it on.” The first sister flew in to be with us. But even then, I thought she’d be ok.

Wednesday. When I think about the worst days of my life, this one is at the top. Wednesday was when my mother, not realizing what was happening, looked me in the eyes and said, “Why are you trying to kill me?” Those are the last words she said to me. My mom thought I was trying to kill her. It was shortly after that that we learned she wouldn’t get better. She wasn’t coming home. Forcing her into X-rays, a feeding tube, the CPAP, it wasn’t going to change anything. She was going to die and we were going to watch. There were steps we could have taken to prolong her life by days, maybe a week, but she would have been miserable and it wasn’t fair to force her to stay alive so we could feel better about her death.

The rest of the sisters came home. My mom fell asleep. We tried to keep her comfortable with drugs because the only thing worse than my mom dying was thinking about my mom lying there in pain and not able to tell us. People came to see us, to say goodbye to her. I wondered if she could hear them. Could she hear me? I told her how much I loved her anyway. My vibrant, happy, always on the move mom was now silent and still in a hospital bed. “I’m not ready!” I thought, panic filling my chest like someone had dropped free weights on me and walked away. Instead I say thank you to the friends and family and cry when I’m alone. She died on that Sunday. One week from the day we brought her in for what we thought was just one night.

The wake and funeral were beautiful. I think, I don’t remember much of them besides the huge amount of people hugging me with sympathy eyes. I think I floated through making those arrangements and then those two days on autopilot, unable to accept who they were for. Not MY mom. The sisters packed their things and went back home as if resuming their old lives was even an option. I helped my dad move from the big home they had built together into a smaller home where her absence didn’t scream from every corner, every creak in the floor. I lay my head down at night and replay the last week of my mom’s life, over and over. I see her face the Sunday morning I came tearing into the hospital, needing to see for myself that death had been there and stolen my mother. I think about her being in the ground less than a mile from where I sleep. Is she cold? I hope she’s happy and watching over us. I hope she’s proud of the person I am and the person I’m trying to raise my son to be. But mostly I hope that she knows that she was one of the great loves of my life. I have never and most likely will never be as close to anyone. I hope she knows how big the hole is she left behind, true proof that she was loved so profoundly. And I hope I get to see her again someday, feel her embrace and her voice saying, “I love you, Buns.”

Editor’s Note:  I asked for a photo to share in this post. When Amber sent this one – the last moments she saw her mother alive, I asked if it was OK and if she was sure she wanted to share this particular photo. She urged me – because she wants to tell the story. And she wants to tell you – you’re not alone. 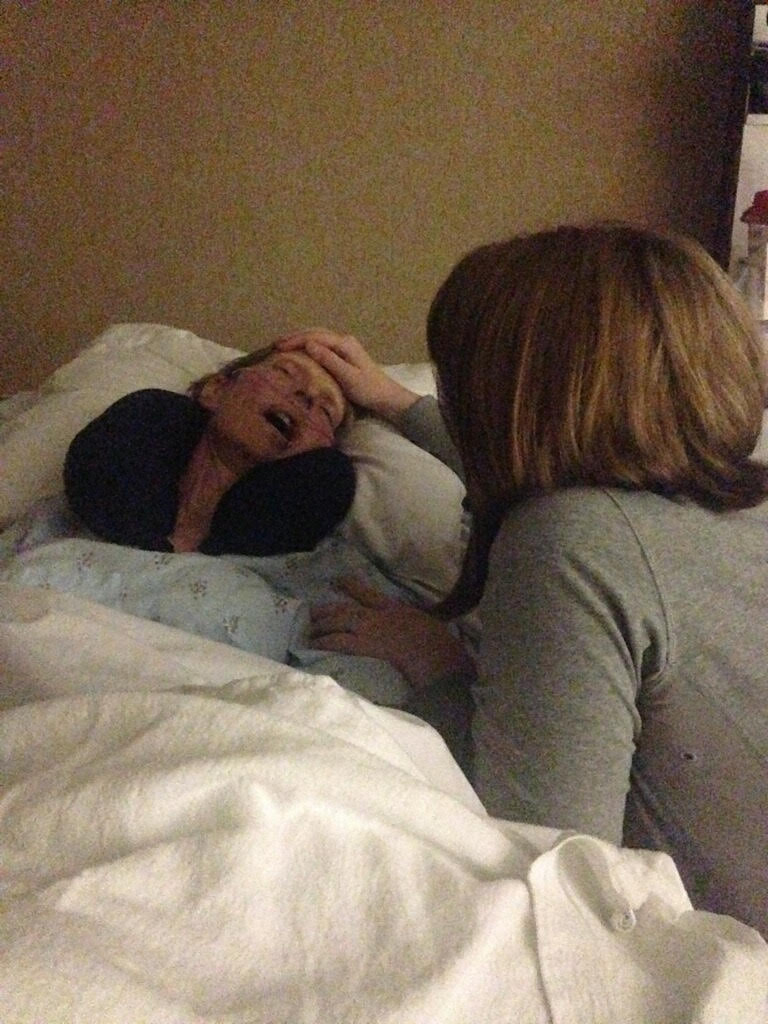 “The purpose of writing this for me was to possibly help someone who feels these feelings and thinks there’s no one who understands. It’s so ugly. It took someone so beautiful and full of life and slowly sucked out every ounce of what made her my mom. And people watch it every day. I want them to know they aren’t alone.”