Well I am long over due for a post. It has been a busy year so far. And the past 5 weeks have been no different. Now some of you may know that I just had a beautiful baby girl, Brooklyn Michelle. What you may not know is the crazy adventure my poor husband and I went through to get her. So I will start at the beginning. October 2011 Brent and I decide we are ready to start a family. Well apparently we weren’t ready, after 12 long months of tears and lost hope we were ready to give up when we were “surprised” with a positive test. Silly us we thought this was the hard part of the adventure.

We made it through the fun first trimester and everything was going perfectly, until…about 26 weeks just shy of the 3rd trimester. I started to get this pain on my right side just below my belly and not to be to graphic was having some digestive issues about the same time. So I called my doctor, the nurse said to pick up some over the counter medicine and that should take care of it. I followed my directions and did as she said. It did relieve the pain for a couple days but then it just came back. Not wanting to take a whole bunch of medicine I called again saying the pain was still there, they gave me another over the counter medicine to try saying neither of these will hurt the baby and explained it was just a normal pregnancy pain.

I continued with the medicines but they really didn’t seem to be helping. The first weekend in May we traveled to Arkansas to attend my cousins wedding, I did my best to suck it up but at this point the pain was getting more and more painful, all I remember thinking is if this is normal looks like we’re only having 1 child, but being the strong women I am I sucked it up and carried on 🙂 After that weekend I called again saying the pain was still there and I was still having digestive issues, again they offered another over the counter medicine to try and continued to tell me this was normal.

But the pain just wasn’t going away. After a week of pain, it started to get worse.

Just to give u an idea of how bad this pain was here are a few things I was doing:

1. Scooting not walking
2. I had to get into my car butt first (I couldn’t lift my right leg)
3. Made my husband move the couch so it wasn’t as far from the bathroom
4. .Hurt to sit, stand, sleep <—but lets not kid ourselves I wasn’t sleeping

So have the pain imagined?

Finally I called the doctors for the 4th time, this was Friday May 17th, when they asked if I thought I needed to see someone I said yes!! I scooted into the doctor, struggled onto the table I was told it was a nerve causing the pain and was totally normal. I was sent home and told to take Tylenol and call if the pain gets worse.

Well the Tylenol numbed it for a couple hours, so I thought I would be fine.

I kept taking Tylenol through the weekend and even went to work Monday, May 20th even though the Tylenol was now officially doing nothing. But this was just a normal pregnancy pain so I needed to suck it up and stop being such a baby. It got to the point I was in so much pain I couldn’t even hold my head up, I made it to about 3pm and said I got to call it a day. I made it home and to my couch I was in so much pain each trip to the bathroom got harder and harder…until the tears came. Brent kept telling me call the doctor. I would cry I can’t it’s after hours and its not an emergency. (Little did I know it was)

I finally did call. Luckily my doctor was on call, when I talked to her she asked if I needed to come in or if I could handle the pain until tomorrow, I mentioned I couldn’t walk two feet to the bathroom. She quickly says that isn’t normal yea you need to come in, meet me at the hospital.

After an ultrasound we still had no explanation for the pain, but did discover my baby girl’s fluids were very low. The doctor didn’t seem too alarmed by it but did inform me I would be delivering early, she would like to get me to 34 weeks and I would be on bed rest the next 4 weeks. Since I won’t be full term they gave me the steroid shot to help the lungs develop quicker. There were two shots that needed to be given and they had to be given 24 hours apart, so I would spend the next two days in the hospital. At this point I was so excited to be under close watch and given good drugs to help with the pain!

So it was Monday night at 11pm that I received my first shot, I got the next one Tuesday at 11pm, Tuesday would put me at exactly 30 weeks. Wednesday morning we were all ready to get out of the hospital, knowing I would be on bed rest but at least ready to go home. My doctor came in and informed me I would be on bed rest at the hospital for the next 4 weeks, she really wanted to get to 34 weeks, but would be comfortable with 32 weeks…yea right, I thought, my baby won’t be that early she will make it longer than that. She ordered another ultrasound to see if they could figure out what was causing my pain and check on the baby’s fluids.

After the ultrasound, Brent and I ate lunch and started making a plan, I put a list together of things I needed from the house: clothes, toiletries, movies, magazines, etc. He was about ready to head out when our nurse comes in and says you are going to have a C-section. We were both like ya we know, her reply, no now! I can’t even tell you what was going through my head because I was in complete shock, tears started rolling down. All I could think is my baby isn’t ready, how will this end, what will she look like, how big is she…this can’t be happening. My doctor explained that the ultrasound showed our baby now had no fluids and she wouldn’t live another 2 days inside me. How could it be my little girl is safer outside over inside.

Shortly after more nurses came in the room, working quickly to get me prepped. When I realized I recognized one of the nurses, I didn’t know her personally but I recognized her from another friend’s photos and knew the name. Through my tears I mutter, are you Megan’s friend Abbey. She looked at me and instantly knew who I was, I could see in her eyes complete sympathy. Even through my shock, just seeing a familiar face helped calm me.

Now everything from this point on it a complete blur, between the drugs and the shock, nothing was making sense. The pieces I do remember are a bit hazy. When they did the spinal Abbey was the one that was helping me sit upright, I remember asking her just to hold me, she instantly just wrapped her arms around me, I just held on and closed my eyes. Remember I have never met her but it meant the world to me that she treated me as a friend.

Next thing I remember my husband walked in the room and sat next to me. At 2:06pm exactly we hear the doctors say it’s a girl and don’t worry preemie’s don’t usually cry, at this point I don’t even think I knew I was suppose to hear a baby crying.

A little more time passed, who knows how long, the doctor placed this small child in my face…I instantly started crying who is this child, my child still has 10 more weeks. I looked and her but didn’t know what to do, I didn’t have use of my arms, I just looked at her crying, he put her closer so I got a quick kiss in before they pulled her away. Next thing I remember is the doctors saying get general surgery in here and put her to sleep, and Dad its time to leave.

I wake up and I am still in the room, a huge pain rushes over my body. I start asking for more medicine I hurt so bad. For the next what seemed like hours all I remember is continually asking for more medicine I was in so much pain. Its now time to take me upstairs, I remember them asking if I wanted to see my baby, yes please I want to see my baby. They were able to wheel my entire hospital bed into the NICU, it was dark so I couldn’t see much and the medicine had started to take effect, I don’t even remember getting wheeled out.

Later the doctors explained, the reason I was having pain was because my appendix had ruptured, was wrapped in scar tissue and was very infected. The infection had made it to the placenta, causing the lack of fluids. It is a complete miracle my baby and myself are here today.

Brooklyn has been quite the little fighter through this journey, when born she only weighed 3lbs and 1oz and since I was able to get the shots she has never needed oxygen and was only on the ventilator for a couple days. Thankfully she hasn’t been sick and somehow avoided the infection. Our time in the NICU has been long this week has been 5 weeks, but the nurses and doctors have all been awesome. Although I want her home I will miss the nurses that have not only cared for my daughter, but treated her as one of their own. For that I am forever grateful.

Through all of this I have learned many things but the most important is God has a plan for all of us, and no matter how much I plan that isn’t going to change His. Another lesson learned, I know our doctors and nurses are experts, but we know our body better than anyone else. It really never hurts to question them, they still may tell you, you are wrong, but at least you can say you tried.

Please keep praying for my little Brooklyn, she is doing so great and TODAY we get to go home! 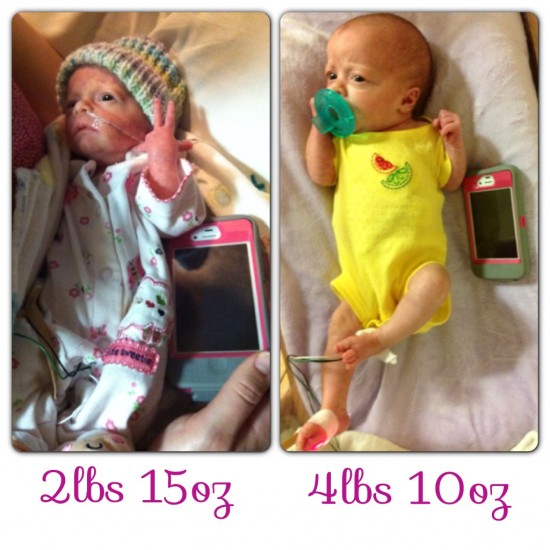 I am an Omaha native now living in the beautiful town of Valentine, Nebraska. If you haven’t visited you must! It is a gorgeous town that boosts its natural beauty. I am also a wife and mother of two beautiful little girls, living the daily struggle of balancing all life has to offer. My greatest joy is getting to spend time with my family, whether it's cooking, dancing or traveling, we do our best to take it all in and enjoy every moment.