Coffee With Her, Journal, Kids, Motherhood

In: Coffee With Her 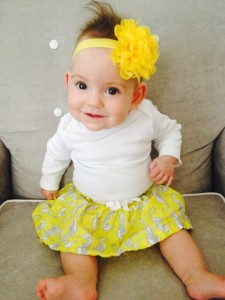 It’s hard to believe that my surviving triplet is about to turn one year old. This past year of Peyton’s life has been a whirlwind journey, filled with absolute joy and gut wrenching heartache. And as the days creep closer to my triplets birthday, it’s hard not to look back at one year ago.

The mind works in a funny way. I may forget where I put my keys or purse, but I can remember every little detail of the days leading up to their birthday. A year ago today, I was on bed rest at home. Little did I know that hours later, Abby’s water would break, sending me to the hospital for the remainder of my pregnancy. I never thought that my children would die. Bad things just didn’t happen to me. I am a happy-go-lucky gal, full of life and I was so excited to embark on the journey called parenthood. 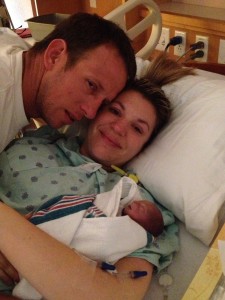 But if you have followed my story, then you know, life threw my family a curveball. At 22 weeks and 6 days, I delivered my triplets. Born more than 17 weeks premature, Abigail lived for a few hours, brother Parker for about 2 months. Our survivor, Peyton, faced her own challenges including blood transfusions, surgery, lung issues and a brain bleed. But I like to think that she took strength from her brother and sister to thrive in the Nicu, ultimately joining our family at home after 4 months in the hospital.

How do you fill the void of your children who are no longer here? The simple answer…you don’t. There is always that emptiness, a longing to hold your child who was taken from you far too early. As I look back to the early days, I can’t help but wonder what life would be like with my three kids at home. While Abby was only alive for a few hours, she was the active one in the womb. She would kick her brother and sister and start a roller coaster of movement; my belly a visible domino game. My family got to see Parker’s personality from day one. While Peyton was nicknamed the “Diva”, Parker was a saint. His quiet disposition was adored by all of his nurses. His eyes were always wide open, ready to see the world, like he knew his journey here on earth would be a short one. As I reminisce,  I can picture my identical girls playing and harassing their brother, while Parker calmly allows them to tug his hair. The thought brings a huge smile to my face through the tears of sadness. 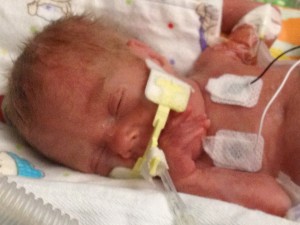 Much like the roller coaster of movement in my womb, my grief has hit many highs and lows. I can’t think of a day that has gone by when I didn’t tear up or break down and cry. As I tell my friends, family and coworkers, it’s just part of my new normal. I remember thinking that grief should subside after a few weeks or months. Life would get back to the way it was, just different from what we expected. Boy was I wrong! Little did I know, grief doesn’t go away, it just changes over time. There are days when I think back to special moments, where my tears are those of joy. Parker had crazy blonde hair that would stick up on one side. It became known as “Parker Hair”, a reference that friends now use to describe their own child’s wild do’. But there are also days of absolute heartache, where the tears don’t stop and my heart physically aches. What comes to mind–My first Mother’s Day, where instead of posing for a picture with my three children, I posed holding Peyton with pictures of my two angels in the background.

As the days creep closer to Peyton’s first birthday, I find myself balancing the grief with celebrating the joy of our miracle child. There is nothing that will fill the void of Parker and Abby, but I remind myself to be strong for Peyton. I knew this first year would be difficult and I am so proud of how far I have come. Thanks to many therapy sessions and an amazing support group of thousands of people around the world, I am surviving. And on those days when the grief is unbearable, I look to my daughter Peyton. She’s the pillar of strength and has an immense love for life, thanks to the help of two angels guiding her from above.

Read more posts from Stacey on Her View From Home.

Read more posts from Stacey on her blog:  Perfectly Peyton