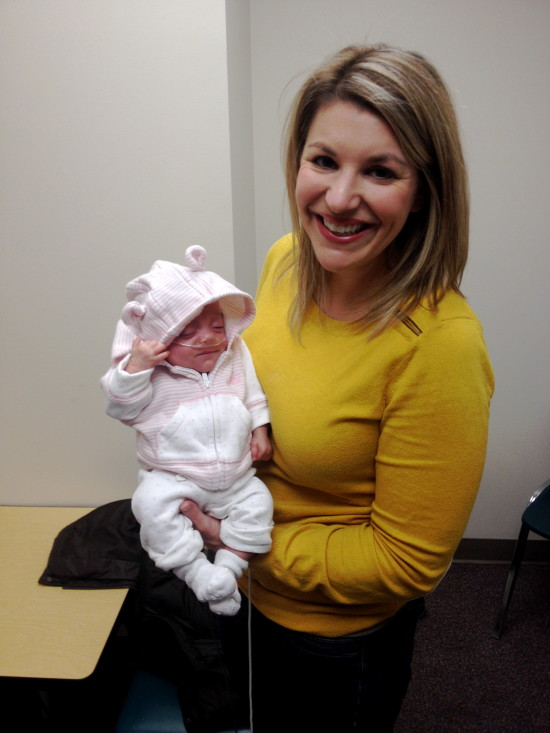 On “Black Friday”, I escaped for a few hours to take part in the chaos of holiday shopping. As I stood in line to buy some gifts, I looked down at my sweater, only to find dried spit up running down the front of me. I was oblivious to what I looked like at that early morning hour. Welcome to parenthood!

Peyton has been home for 7 weeks now. I haven’t quit my job, I’ve just taken a leave of absence. So, for the last two months I’ve become a stay at home mom. There are a lot of jobs that are difficult. My career as a news anchor requires me to use my writing and people skills. Putting myself out there in front of thousands of people could be considered a tough job for some. My husband is a carpenter and a lot of people would say physical labor is the toughest. Well I have to say being a stay at home parent is the most difficult job imaginable!!! And I’m really starting to question parents who say their newborn is an angel. After looking at my little princess, I don’t believe anyone! 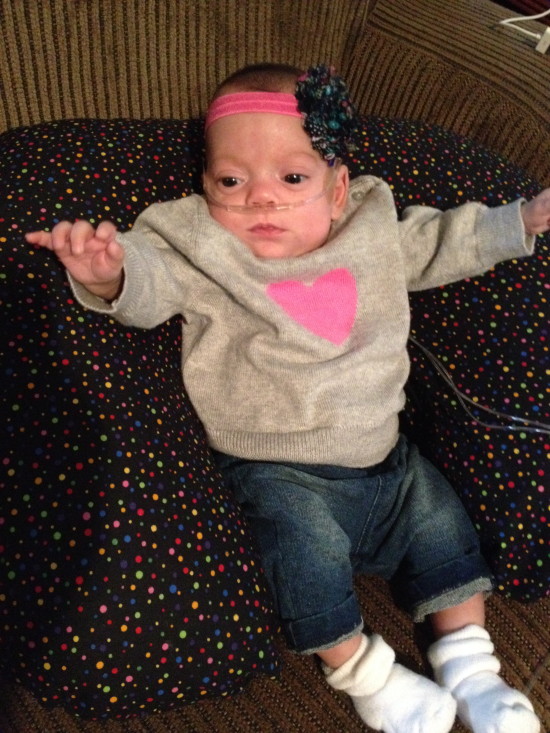 In addition to the oxygen she requires, Peyton has faced a few typical baby issues. Acid reflux, constipation…oh the list goes on and on. I even have our pediatrician on speed dial by now! There is no way for a new parent to be fully prepared to handle a newborn. And there is no book that has every single answer. There are days when Peyton cries for several hours at a time. I’m left trying to rock her, soothe her and calm her down. I’m not going to lie–there have been a few days where I cry alongside her. Not because I feel her pain, but because I don’t know what to do. It’s those moments when I have a new appreciation for every single parent out there, including my own. I’ve called my mom on several occasions, asking her advice on what to do. There is something about being helpless when your child is hysterical…it sends a shooting pain to the heart. 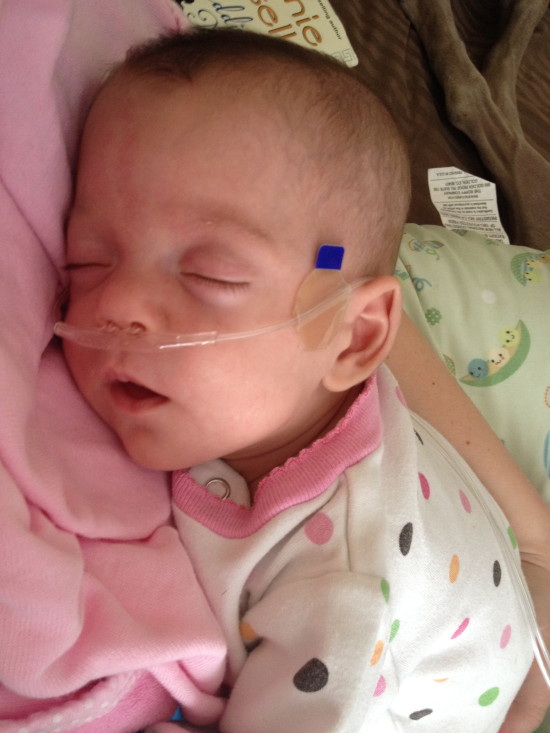 But those days of going crazy are completely forgotten when I stare at a peaceful Peyton. I could sit and watch her sleep for hours. That perfect little nose, those tiny little hands, the thumb that sometimes finds her way to her mouth. I look at her and wonder, “How did we get such a perfect and beautiful little girl?”. In 5 months time, our miracle has overcome more challenges than most people face in a lifetime. It’s hard to believe those perfect little features were visible at birth, when she was barely a pound. My triplets were born more than 4 months premature. And while we faced a rocky journey in the Nicu, we also had a unique and wonderful experience. We got to see our little girl grow and develop outside of the womb. That adorable nose and perfect lips are usually only visible through an ultrasound. But for us, we saw her grow before our eyes. At 5 1/2 months, Peyton looks like and acts like a newborn. She’s the same size as the birth weight of most babies. So even though she’s approaching 6 months old, she is still learning the ropes as a newborn.

And while Peyton is busy learning to use her hands and hold her head up, I’m learning to go with the flow. The spit up and blow outs are all part of parenthood, as are the screams and cries. Over the last few months, I’ve realized that I don’t have to be perfect. There is a learning curve when it comes to parenting. And when Peyton clings on to me, I realize, she needs me…and that love is the best feeling a parent could ever have.