I’ll never forget the day my little brother was born. I was outside playing with my best friend from up the street in the playhouse my dad and grandpa had built for my older sister and I. We were playing some version of “mommy,” where we had stuck baby dolls up our shirts to pretend we were pregnant. I had been fascinated with my mom’s pregnancy for the entire time she had carried him. So, when my parents came out and knocked on the door of my playhouse and informed me my grandma was coming down to watch my sister and I so mom could go have the baby I was super excited!

Later that night, my parents called the house to inform all of us that I now was an older sister to a little brother. I remember asking my mom three or four times if it was a girl since I had wanted a little sister. She had to tell me as many times, “No, it’s a boy. You have a brother.” The sophistication of 1990’s sonogram technology had indicated to my parents at the previous doctor’s appointments that “it probably is a boy.” Much to the distress of my dad, who after two daughters, really wanted a boy the third and last time around.

I got to meet my new brother the next day. Of course, I thought he was pretty cute. But, to be honest, I didn’t like him at first. I had been the baby for eight years, after all. With as interested in him as I had been while he was in my mom’s belly, it was surprising it took me a few years to show much interest in him. It wasn’t until he was mobile that I really started to notice him.

That’s when things started to develop. My older sister and I used to fight. FIGHT. We’d fight over anything and everything. So, after I had a younger sibling I swore to myself I’d be as nice to them as I could be. Of course, I knew he’d anger me, but I really wanted to take him under my wing and try to be as kind to him as possible.

He’d come up to the couch where I was laying and ask for little pieces of whatever I was eating. He always got his pieces.

I remember trips to the beach where he and I would build sand castles in the Maine sand and I’d ask him if we had enough moats to make it just right. I’d add more if he requested.

I’ll never forget the first time I heard his little footsteps running through the kitchen to the end of the house where my sister and my bedrooms were. I listened as he first went to my sister’s room and uttered in his little three-year-old voice, “I’m scared. Can I sleep in your room tonight?” Sometimes she’d say yes, but when she didn’t, he’d next knock on my door and I’d let him in to sleep on the floor next to my bed with some blankets and a pillow. After enough attempts, he didn’t bother knocking on her door anymore and just came to mine. I never turned him away. Our little sleepovers in my room are among some of my most cherished memories. I’d make him laugh by making little figures with my hands while shining a flashlight onto my bedroom wall. He’d let out the most precious giggles and I just knew I’d hurt anyone that ever dared to hurt him. 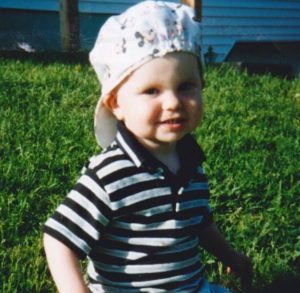 Years later, I remember taking him driving around our town to prepare for his road test to get his license. He had scared my mom one too many times. So, I took him and also let him use my brand new car to take the test. I ended up getting sick the day of the test, so mom took him. But, he passed on his first try. I was so proud of him.

My little brother was my sidekick for most of the milestones in my young life. He and I took a selfie together after I came home from my junior prom – all before selfies were even really a thing. He played a major role in a silly horror movie my friends and I made one summer in high school. He was my little buddy, almost always by my side. 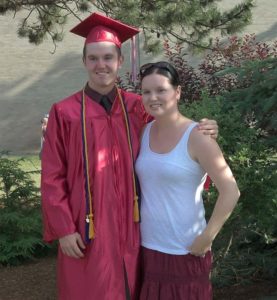 I watched my little brother grow up. By the time I had turned 19, I started dating my now husband and my brother was really coming into his own. We still did things together, but our time together became less frequent as he became more interested in his friends and I got more immersed into my budding romance.

Today my brother has grown into the kind of man I am proud of. He graduated both high school and college with honors. He has a full time job. My oldest son looks just like him and my brother just so happens to be his Godfather. He is a good man.

I truly feel like all of those years ago, God decided our family should have another kid in it. Not only that, but a boy this time. The addition of my brother to the family really grounded me and taught me what it was like to genuinely care for another human in a different way than I cared for my parents and sister. In a way an elder cares for a younger person. No, he wasn’t mine to feed, clothe, and keep healthy. But, in a way he was mine. He was mine to nurture, protect, and look after. He taught me how to be a big sister. He was the first person I ever really took care of besides myself.

All of these years later and I know that in a way being a big sister helped to prepare me to become a mom someday. I even said to my husband the other day, “I think that we were probably meant to have two boys.” This surprised my husband because ever since we have known one another he knew how much I’d always wanted a daughter. I responded with, “With how close my brother and I were growing up, and how much I took him under my wing. I really feel like it was preparing me to be a mom of two boys.”

However, you don’t have to have the same sex child and sibling to feel this way. If you are lucky enough to have a little brother or little sister, cherish them. They may drive you crazy from time to time, but let it all be a lesson of things that may be yet to come in your life. Little creatures that will drive you even more crazy and you’ll love even more fiercely – your own kids.