A few weeks ago, my friend Julie wrote a guest post called “You Might Be a Home Schooler If…” for my blog. I couldn’t write that post, because I’m not a home schooler.

I also can’t write a post about being a mom of boys, because I’m not one of those, either. But Julie can, because she is. So she did.

What I can write about is being a mom of girls. So that’s what I’ve done.

This isn’t about stereotyping or labeling or pigeonholing kids based on their gender. We’re not trying to say all boys do this or all girls do that. We’re just saying that this is what life with boys and life with girls looks like for us, respectively. And, for that matter, respectfully.

Whether you’re a mom of boys or a mom of girls or mom of a mixed company, here’s what Julie and I think you might love about it as much as we do.

Julie’s View: 10 Things I Love About Having Boys 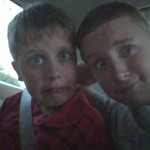 I have two boys, ages 13 and 14. We didn’t find out the gender of either while I was pregnant, and when I was pregnant with the younger, I was really hoping for another boy. I already had all the toys and clothes, and I knew they’d be great friends. Many people asked me if I wanted a girl after having two boys, but I never did. Even though boys can be gross and messy and weird, I love having them. Here’s just a few of the many reasons why:

They get each other’s jokes. They have many “inside” jokes, and they laugh together all the time. They won’t share most of these jokes with me, and that’s ok, because I probably don’t want to know.

They like to ride quads and dirt bikes. This should probably scare me, and sometimes it makes me nervous. But for some reason, not much brings a smile to my face like seeing them ride off down the field on their quads.

They treat me like a lady. Their father taught them early on to hold the door for me, and to thank me after each meal I’ve prepared for them. I love watching them become gentlemen.

They’re tough but tender. They are becoming strong, but at the same time, they hug me when I’m crying, they tell me they love me when I least expect it, and they help me if ever I’m in trouble.

They’re best friends. They’re close in age and they’re home schooled, so they’re stuck with each other all day. And even though they’re total opposites, they really seem to enjoy each other.

They adore their dad. There’s something about boys and their dads. They listen to him more closely, obey him more quickly, and definitely prefer him over me. Oh well, I’m glad it’s that way. At least they still want me when they’re sick.

I can make them do things. I can claim they need to take out the garbage and walk the dog, because I’m busy inside cooking and cleaning.

They can pee outside. Actually, I’m just jealous. I gotta go all the way back in the house. What a time waster. My youngest will even pee outside the living room door while watching TV so he doesn’t have to take 20 steps to the bathroom and then wash his hands. What a life!

I like to see them turning into men. Their voices change and they start noticing girls. I’m not sure I’m ready for this, but it’s fun to watch anyway.

They’re less expensive than girls. No barrettes, tights, dresses, or makeup. However, as I think about my ever-growing grocery bill, I wonder how it will all add up in the long run. I do love watching them inhale food and seeing their healthy appetites.

I’m sure if I had become the mother of two girls, I’d be loving that just as much. But not a day goes by that I’m not thankful for my two boys.

Elizabeth’s View: 10 Things I Love About Having Girls 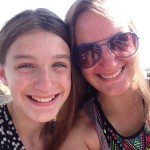 Ours is a house of estrogen. My husband carries on valiantly as the token male in the middle of our feminine frenzy: one tween girl, one teen girl, and me.

I love having daughters. For one thing, if I’m trying on a dress, and I’m not sure whether it makes me look stunning or like a candidate for a “What Not to Wear” reunion episode, I consult my girls, and they give me the unvarnished truth straight away.

I also love these other pleasures of having an all-girl roster:

They notice the cute. When my second daughter was born, a friend (mom of two boys, no girls) came by with a gift. She’d packaged it adorably, and she handed it to my older daughter to open on behalf of her freshly-minted sibling. Big sister took the package and immediately exclaimed, “What a cute gift bag!” My friend said, “Oh. My. Word. That is such a girl thing. My boys would never have noticed the bag.”

Hand-me-downs rock. We call it “shopping in the closet,” and it’s pretty much the best thing ever.

They do each other’s hair. I don’t do hair. It’s too much like crafting, which I also don’t do. But most 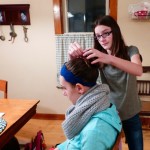 mornings before school and most afternoons before dance, the Sisters Salon is in full swing around here. I contribute my limited talents by rounding up ever-elusive bobby pins. (My girls don’t call me “Sleuth Mom” for no reason.)

They watch movies with each other and with me. Finally, I have someone who will hunker down for my all-time favorite movie—Sense and Sensibility—without acting like they’re being tortured.

They’re neat, clean, and organized. My girls will sometimes spend their free time revamping their dresser drawers. Also, our toilet seats are always down. (Their father, while not a fan of the aforementioned Sense and Sensibility, did come to us well-trained in lavatory etiquette by his mother.)

I’ve never had to know about Thomas the Train, Legos, or Minecraft. Of course I know lots of girls are fans of these things. But mine aren’t. We have hair ties and “Dance Moms” instead.

I understand their “stuff.” Shower gel that smells so good, it makes you want to eat your elbow. Tank tops. Cute polka-dot water bottles. EOS egg-shaped lip balm. I get these staples of girldom. Which is why I felt a little out of my element last year when I was staring down the football paraphernalia at Walmart. My girls needed black under-eye goo for a dance recital routine. (They were writing something on their arms, and it needed to come off easily.) I found the required item and was comforted by its familiar lipstick-esque dispenser. I was also really, really grateful to realize I’d never have to buy one of the other, er, “products” in that display. Ewww.

I understand their other “stuff.” Hormones and crying and mood swings, oh my. I know, sweetie, I know.

They’re built-in friends. I mean, yes, sometimes they treat each other like they’re living out War and Peace with all the war and none of the peace. But mostly I love to see my girls’ genuine love and concern and affection for each other. I think they just might be buying the mom wisdom I’ve preached their whole lives: “your friends will come and go, but your sister will always be your sister.” (See also, “YOU LOVE EACH OTHER! YOU DO! DON’T ARGUE WITH ME!”)

I’m completely crazy about these sweet girls of mine. God knew what He was doing when He made me a mom of only girls. (He’s wise and clever that way.) Sometimes, though, I do think about the baby we lost between our daughters in a miscarriage so early we couldn’t have found out the gender even if we’d wanted to. I have no way of knowing this, of course, but when I walk into heaven, if I’m greeted by a little guy who calls me “mom,” well, that will be so sweet, too.