I’ve Got the Mid-Summer Blues

Raise your hand if recently you’ve said to yourself, “I can’t believe it’s mid-July already!”

I think I have the mid-summer blues.

And here it is, eight weeks into the summer, and I’m not exactly sure what it is that we’ve done.

Oh sure, the boys played baseball until the end of June, took tennis lessons, and went to camps. We’ve been to the pool many times, visited the Lincoln Children’s Museum (a new fav of ours!), and a small smattering of other outings. We’ve been to our lake house half a dozen times – of course the long week we were there, half of us started out the week sick and the other half ended the week sick.

But the play-dates I promised the boys? Haven’t been scheduled.

The new places I told them we’d check out together? They’re still waiting.

The craft projects, the backyard waterplay, the cooking experiments? Nope. Nope. And nope. 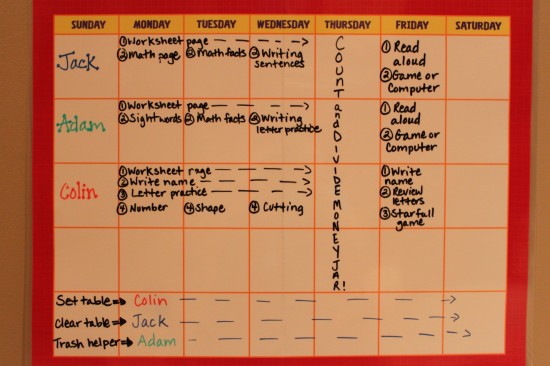 Still hanging up, though abandoned a few weeks ago.

Even my own summer goals have yet to reach fruition. My sister’s wedding came and went this past weekend. That ten pounds I wanted to lose beforehand? Still on me.

Training for that 5k I want to run this fall? Sporadic, at best.

My writing projects? Only when I can fit them in.

The pile of junk on my desk that I wanted to sort through? Not only is it still there, but it’s growing!

So what have we been doing, you ask?

That’s the thing – I don’t know. When I look back on this summer and try to play the highlight reel in my mind, I’m not sure what will be on it.

That’s still plenty of time left to do all the things I wanted to do with the boys. I just need to not think about it so much.

You see, I’ve been so worried about making this a great summer, that I’ve forgotten the six most important things: Hubby, Jack, Adam, Colin, Evan, and me.

Because, truly, the best moments in life are the unplanned ones, the small ones. They are the ones that happen when you are simply enjoying life and the ones you love, not trying to stick to any preplanned agenda.

So, I guess I can think of some memorable moments from the first half of our summer.

Like my anniversary dinner date with Hubby on which I wore my hot new dress from a California boutique, and how he proudly marched me by a table full of businessmen who stopped talking and stared.

And all our great talks during our three hour drive to the lake when the boys were zoned out on movies in the backseat.

Or the time when Jack, the eight-year-old with the longest, skinniest legs I’ve ever seen, squeezed himself into his one-year-old brother’s pool floatie and paddled around the pool all afternoon long having the most delightful time.

Or when Adam and I rode our bikes together around a small lake near our house, just he and I in a moment of mother/son bonding that made him feel like such a big boy.

Or when, after riding down the big waterslide with me several times, four-year-old Colin decided he was ready to go down by himself. Watching him bravely ascend those stairs made my heart swell with pride.

Just today, as we parted ways with members of our family after my sister’s wedding weekend, I watched with glee as twelve-month-old Evan said, “Bye,” and gave a darling backward wave for the first time.

And for me, only Mommy, free poolside yoga every Tuesday morning of the summer. Namaste.

But my favorite moment so far has to be the impromptu nighttime boat ride we took as a family. We went out just as the sun was setting. 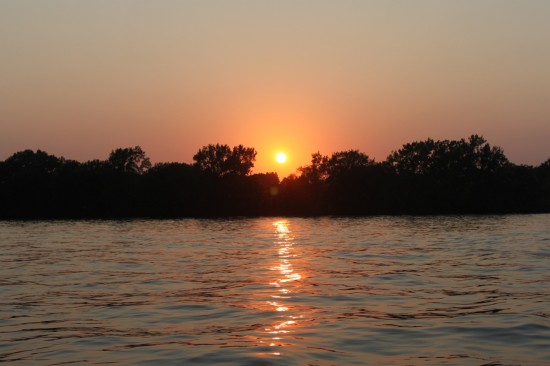 Hubby was playing Neil Young’s Harvest Moon, the air was cool, and the lake was fairly calm. Baby Evan had cuddled in and fallen asleep on my lap, and the other boys were stretched out together on the back u-shaped seat. We tooled around the lake looking at all the big homes whose lights illuminated the surface of the water.

It was a surreal moment in which we enjoyed peace as a family together under the stars. I couldn’t have scripted it better myself.

I thought about a quote I posted to my ‘kissing the frog’ Facebook timeline that reads, “Enjoy the little things in life for one day you’ll look back and realize they were the big things.”

Lucky for me, we still have eight weeks left to enjoy the little things. And there’s no reason to be blue about that.

Is anyone else panicking about the fact that it’s mid-July already? Or are you taking time to enjoy every moment, small and big? What have been some of your favorite moments of summer so far?