Share
Written by Jennifer Sill.
I did it.
I started.
I need to lose some weight. Quite a bit of weight. I can blame it on my babies or my change in lifestyle. Fact is, it is time for change.
So, Tuesday I started boot camp. I’ll keep you up-to-date on my progress. Ugh. To me, it feels overwhelming. (sigh. deep breath.)
Anyways, my boot camp instructor is my hero. She started in much the same place as I am now.
Here’s her story:

Since then I have had a number of people ask for my story to help encourage others. Because it is so long, I thought I would give you a piece of it at a time, including some pictures. Let me tell you, it was extremely hard deciding to post these, but I know seeing is believing.

On New Years Eve in 2001, I made my first New Year’s resolution that I stuck to. I decided I would dedicate time for myself and ended up losing over 64lbs. I have gained some of it back over the years, but I can tell you I am a totally different person then I was back then and the journey I went through changed my life forever! I would not be here, working for such a GREAT organization like the YMCA if I had not gone through this, so hear me when I say, your life can change for the better…you just need to start!

Part I of my story:

After seeing a photo of myself from the side view, I decided I had had it. It was time for me to take care of myself. I was a stay-at-home mom with three boys and took care of everyone’s needs except myself.

My whole life I was active and played sports. Volleyball was my passion. I played all through school and even into college. Even though I knew I needed to work out, something just happens—life! So after having my third boy, I noticed my body just didn’t bounce back like I wished it would, or it had after my first son and even after my second son. I was depressed and very self-conscious. I had very little self esteem. 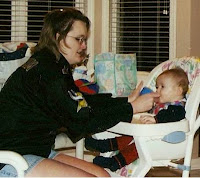 To be honest, if I heard one more person say to me, “Well it took 9 months for your body to get to this point so it will take 9 months for it to bounce back,” I was going to throw something at them. I’m kidding, of course. But it honestly started to get to me. The ironic thing is that I now find myself saying the same things to my friends as they said to me.

The first day the Y was open after Dec. 31, 2000, I joined my very first exercise class at 9 a.m. I had taken exercise classes before, but not like this. Something was different.

I decided to pre-pay child care for my son to help hold me accountable. If I didn’t attend class, it would cost me $2.00. At that point, I had only lost 1lb in the six months since my son was born. Like I said before, I had had it!

Anyway, my first class was a Hi/Low Aerobic class (for those who don’t know, it is like ZUMBA without the cool beat, and you can do it at your own high or low intensity). Kari, my instructor was so sweet. She came right up to me and helped me through one of the toughest things a person goes through—STARTING!

That was what was different—someone cared about me, made me feel important enough to say, “Hi,” and to notice that I was new.

Believe me when I say, I know it takes a great deal of courage to step into a class with unfamiliar faces, or into a gym with an enormous amount of equipment. You need to take that leap, because the best thing you could ever do for yourself is START. Just get started!

Help inspire others! Have you been on a journey?

Editor’s note: Rhonda would incourage you to look up your nearest YMCA. Get Started.

I will continue to tell her story for the next couple weeks and update you on my own journey. I may even share my own pictures. (Jen)