Letting go of the anger…

“How are you not always angry?”

“If that happened to me, I would have taken care of it myself.”

“I could never forgive a person for doing something like that.”

Comments like these are more often than not the norm when we tell others Alexis’ story. And I understand it, I think that those feelings are natural. Maybe I would have said the same thing, if I wasn’t in the situation I am now. But I learned early after Alexis was hurt, she was sensing the sadness, anger and stress that I was feeling.

She was a mirror to my heart.

First there was confusion. I couldn’t understand how the little toddler I was chasing through the house just a little over an hour before was on the verge of death.

Then there was panic. What was wrong with her? What did I miss? She was so healthy.

There were a few times I would start to get angry, but something else would always shift my focus away from that emotion.

Reality started to set in when she couldn’t see, hold her head up, and when she wouldn’t stop crying. And things got really stressful when we were running out of sick days and vacation. We didn’t know what we were going to do. The weeks and weeks of sleepless nights started to set in. And as the story started to unfold, I felt like I had let my daughter down.

This wasn’t about me or Brandon, or anyone else. It was about being a mother, and healing Alexis. But I was taking care of a baby I didn’t know anymore. And the mother full of energy, love and joy didn’t exist.

It took awhile for me to see what was happening. Most of the time when I held her she cried. I wasn’t comfortable holding her, and the way that her body felt made me stressed and sad. It happened a lot, and I started to notice that it might be me.

When I really thought about it, it started to make sense. She was so hurt, and she couldn’t see. She was reading people. She was reading me and feeling everything that I was feeling. I worked hard to relax and radiate positive energy to her, and it worked. The more I let go of the negative energy, the better she got. The better she got, the more I believed that she was going to get better.

It was a lesson that I had to go back to a lot. It never failed. If I was sad or angry, she didn’t want to be around me. She had a short fuse. I would be stumped for a few days, and then I would realize that it was me. I’d focus on the positive and the days would become easier.

I know that Alexis’ situation was to the extreme. If she hadn’t been injured and in the state she was in, I probably wouldn’t have ever noticed. I would have been too busy with our day to day life…work, daycare, cleaning, cooking, and laundry.

I think little ones read us a lot more than we know. I think that our outlook and attitude as parents ends up being reflected with our kids. When the going gets tough, it’s a lot easier to be angry. And that little bit of anger can open up a whole slew of negative emotions and end up being a gigantic hurdle to healing, both physically or emotionally.

It’s not about being fake and pretending the situation doesn’t exist. You have to acknowledge those feelings. But when it comes time to focus, focus on the good things- no matter how small they are.

A simple trip to Target is my example this week. It’s a pain to unload her walker. It’s a chore to cross the street. She doesn’t get to jump on the red balls like the rest of the kids her age, she always wants to do it, I always notice all of the kids that can. It takes a really long time to go from isle to isle and we spend a lot of time steering her away from hitting other people. People stare at her, kids ask what is wrong with her. She ends up being exhausted, and sometimes Brandon checks out alone while I carry a 50 pound girl out to the car and drag her walker behind me.

But if I let all of that get to me, I would have missed out on all of the little miracles that happen on that very same shopping trip.

She was able to maneuver through the girls clothes and pick out an outfit that she wanted. She strolled up to the lady at the “sample stand”, and asked for the cereal she wanted. She said that she’d like to give out samples someday, and that she would give out Mac & Cheese. All of this from a girl that wasn’t supposed to walk or talk after her injury.

Everyone has “those trips” to the store with their kids. The ones where you think the whole store is looking at you as if you’re the worst parent in the world (and they probably actually are doing just that).

But it is amazing how many times we see the same parents, week-after-week at the store, constantly frustrated at and short fused with their kids. As I’ve written before, we never judge- you never know the circumstances going on in someones life. But you have to wonder how much of a role “negative energy” is playing in many of those issues.

Alexis was blind, paralyzed, unable to eat or drink, or even move her arms and legs and she was reading and affected by my negative vibes. Imagine how much “able bodied” kids are reading in their parents and the effect it has on them. 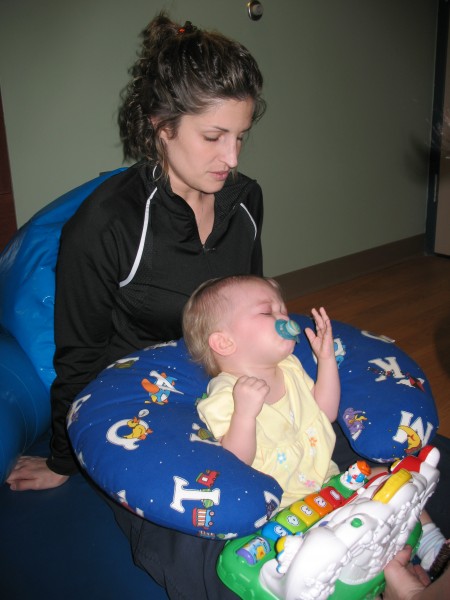