Today marks one month since two tornadoes tore through the town of Pilger. The destruction as a result of  the tornadoes is still something I struggle to process. This harrowing footage of the tornado ripping through the co-op is just mind-blowing. Watch it here.

My co-workers and I spent a week in Pilger. We had U.S. Cellular leaders in Pilger the day after the tornadoes who set up a table in the Red Cross area providing chargers, battery packs, loaner phones, hot spots, and tablets for anyone to use. The next day we brought in a larger mobile support station and were able to support the increasing number of residents, volunteers and relief workers. Our role there was a small but mighty one….keep people connected to the things that matter most to them. 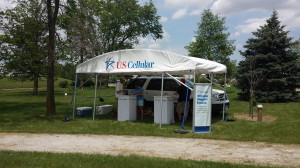 While our aim was to help charge phones, replace devices, provide tablets, etc. we often found ourselves in the role of listener. Clearly people were needing to grieve, to process, to work through the change. Every day we would walk the streets of Pilger and meet someone new. We’d offer our help and very often they would share their experience…here’s few stories we heard or witnessed.

We learned about a man and his family who had just rented a home in Pilger and moved into it on the Saturday before the tornado. He and his family were all safe as they were in Norfolk when the tornadoes hit however they didn’t have renter’s insurance yet because they were just getting settled in and hadn’t gotten it finalized. Here’s what he had to say upon inspecting the home: 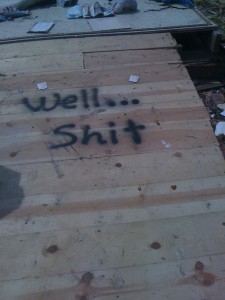 We met a volunteer who was from Alabama and had traveled up to Pilger to help out. He had volunteered in Joplin, Missouri and Moore, Oklahoma as well. He said the sights and sounds each time are hard to comprehend but “every time you just go and do whatever you can do because people need the good.”

One day, my co-worker, Glenn met a resident while he was walking through town. The elderly man was sitting in his rocker on his front porch as he did most days. His porch was still in tact but the back half of his house was gone.

I met a firefighter from Fremont who was spending his off days in Pilger. His 24 hour shifts are every third day so in between, he’d head up two days in a row to volunteer and then go back to work again.

One of our customers shared that he’d hidden in the basement of his business. He said he just prayed and knew that he’d see the light one way or another but he was really hoping it was because he was emerging from the basement.

Walking through town one day, Glenn noticed part of a tree still standing in a front yard. After looking closer, he realized it was actually only the bark remaining as the tree itself had been sucked out of the ground. 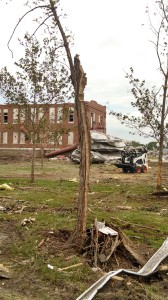 The owner of Cellcom, Inc., Robin, and her staff spent a week travelling out daily to the other communities of Coleridge, Laurel, Dixon, and Allen that were hit by tornadoes the following night. Because the damage was so rural, there was not as much support provided to this area yet families were in desperate need of help. They needed food, water, clothing, and help cleaning up. Robin and her team provided chargers, battery packs, loaners, and water. They also went to several area businesses and gathered donations for the residents in those areas.

I met a woman whose home was still standing but badly damaged by hail. We chatted as we walked around to the back of her house to look at all her flowers on her deck. They were all sitting in the same spot they had been before the storm. Completely untouched.

My co-worker, Becki, stopped to look at what was once the convenience store. In the middle of absolute disaster stood a candy rack with candy still hanging untouched on it. 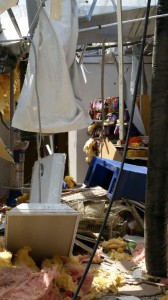 Throughout my time in Pilger, I witnessed a community that was grieving but they were still a community. One that works together to help clean up, one that opened their arms to each other as so many needed a shoulder to cry on, one that was adamant they would come back even stronger. This photo captures their resilience: 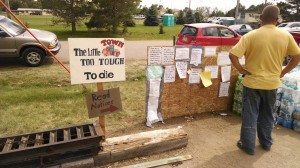