So, Your Husband Cheated On You. But What Did He Do Next?

A flash of horror at my husband’s admission of an affair. An inability to believe he’d betrayed me or to understand how he could’ve had sex with another woman. Oxygen and the capability to trust simultaneously taking leave of my body. Check, check, and check. It was all systems go for the complete and total destruction of me, our marriage, our family, of the life we’d spent 20 years creating together.

That was a very bad day two years ago, one I didn’t think I’d survive. While my husband choked on his confession of having been unfaithful, my heart revved to a pace I instinctively understood it could not maintain. It was fight or flight, do or die, and for untold seconds I’d swear totaled a year, I thought I might leave this world by way of a heart attack. No joke. None of this is, or was.

Two years later, my heart beats on and I’m currently writing this just a few feet away from ground zero. I stayed with my husband, he stayed with me, we are still we. Because of what he did after his affair. And because I chose love.

My husband’s affair was over quickly after it started. His remorse was all-encompassing and led him to recommit to our marriage. He lived with his secret, fearing I’d leave him if I came to know it, for three years until circumstances conspired in a dark corner and forced him to confess it to me.

I guess you can call me lucky. That the affair didn’t last long. That it wasn’t emotional in nature. That I’m not riddled with a sexually transmitted disease. That he didn’t leave me for her. That there was no pregnancy. That my kids don’t have to share their dad with another family. As gradations of affairs go, I suppose this was the “good” kind. I do fight the gag reflex at that thought, but that doesn’t make it any less my truth. Lucky and good aren’t the best words, of course, but they’re close. Because I love my husband and somehow my love for him didn’t burn out or die when it found out how poorly it had been treated. Miraculously, inexplicably, my love forged on. That was not of me, how could it have been? The ability to love like that is superhuman, God-like. And so via the grace of God, I possessed it, too.

You may find you’re wanting me to have been angry, livid, wrathful, a full-on torrent of blood-red rage in response to my husband having cheated, yes? I just wasn’t. Reacting in that way wasn’t part of my story, thus, if you’re hoping it was, that kind of reaction must be part of yours. I did wonder after anger and even wandered around looking for it, but it never did show up to link arms with me in force. In anger’s place, oppressive sadness and cellular level grief pitched a tent of sorrow around me and held me hostage within those walls. I felt trapped in their confines, certain I’d live there forever. That it was to be my new home.

As gradations of horrible mistakes go, if our mistake hurts someone we love, we’ll understand it to be the worst kind we can make because it’ll gravely injure us as well. Nothing has ever broken my husband quite like breaking me, and it was there in his raggedness, face down in the arena, covered with dust and sweat and blood that my husband stood up, ignored his own gaping wounds and began laboring to heal mine. He’ll tell you betraying me was the biggest mistake of his life, and I will agree, but what I’m choosing to focus on is what he did next.

Because love still existed between us and reigned supreme over my heart, nothing in me ever considered leaving my husband. I saw my own path very clearly, including the regrettable portion I’d traveled prior that contributed to the weakened state of our marriage. I never felt confused, uncertain or hesitant about choosing to work towards repair and recovery with him. The only piece of gear I owned at the beginning of this journey though was love and I would come to need so much more. I needed to source understanding, forgiveness, and new-found trust. And I needed a guide; for the road back from infidelity and forward to saving a marriage cannot be traveled alone.

My husband stepped up as my guide and worked to fully equip us for the odyssey as well. He brought with us zero blame for anyone but himself and complete ownership of his transgression; an act I eventually came to understand well enough but will never condone. He brought genuine apology and unfeigned remorse. He brought a humility I’ve not seen matched in this world and guilt-laden regret so deep and wide over hurting me I could not miss how badly his heart ached from the strain of carrying it all.

He brought unceasing readiness to listen to me work through every grueling, exhausting emotion under the sun several times over. He brought a willingness to spend months on a marriage counselor’s couch while we learned how to overhaul our wreckage. He brought everything we would both come to need on this trek before I even knew we needed it. All that he did and all that he didn’t do after his affair made it possible for me to actually do the staying I wanted to attempt.

I didn’t end up staying in our marriage though, because our marriage as we knew it was over. I stayed with my husband. And together we started a new one.

This path I’m illuminating, is it the right path for you? I don’t know, because I’m not you. But I want you to know it’s a path that’s been successfully traversed by someone who’s gone before you. In case you’re wondering if and how it ever could be. I want you to know there is zero weakness in choosing this route; one so often traveled in self-imposed silence and secrecy, something shame can so handily make sure of. The very opposite is true, in fact.

Recovering from adultery and staying with the man who committed it has been the most formidable endeavor of my life. A life that includes being abandoned by my ne’er-do-well father, falling victim to years of childhood sexual abuse at the hands of an alcoholic relative, and a baby born two months early requiring a lengthy and challenging NICU stay, all of which was easier for me to navigate than the betrayal an affair was. The affair was the thing that felt like it would actually kill me, and yet it did not.

Whether you choose to stay or go, I want you to know there is only fierce strength in your own response to infidelity and the breaking of the vows of your marriage. And anyone who tells you differently is expounding their truth, not yours. You alone know your truth; whether or not your love still exists in enough supply to serve as the cornerstone for the complete renovation of your union.

I want you to know the awful reality is sometimes it takes something extreme, wielding the decisive power to devastate, to get a couple’s attention and motivate us to take restorative action against the deterioration of our marriage.

I want you to know you don’t need to own even a feather’s weight of shame for choosing to stay, forgive, and to fight for the marriage you’d counted on lasting the length of your life. There is no low self-esteem or poor self-confidence involved in choosing to work hard to preserve the family you lovingly and laboriously created with the man you loved and still do.

If anyone ever tries to make you feel anything less than fierce, courageous and warrior-strong for doing any of the above, I want you to recognize that unsupportive effort to be their own story they’re telling, not yours. People view the world as they are, after all, not as you are.

If you are love, if you are forgiveness, if you are hope and redemption and reconciliation then very possibly you’ll see your broken, crumbling marriage as something worth attempting to rescue and rebuild. If that’s how your own story goes, it’s a brave and beautiful story to tell and I don’t want you to doubt that for a second. One second is too much time to spend doubting your truth; spend it instead on your love. 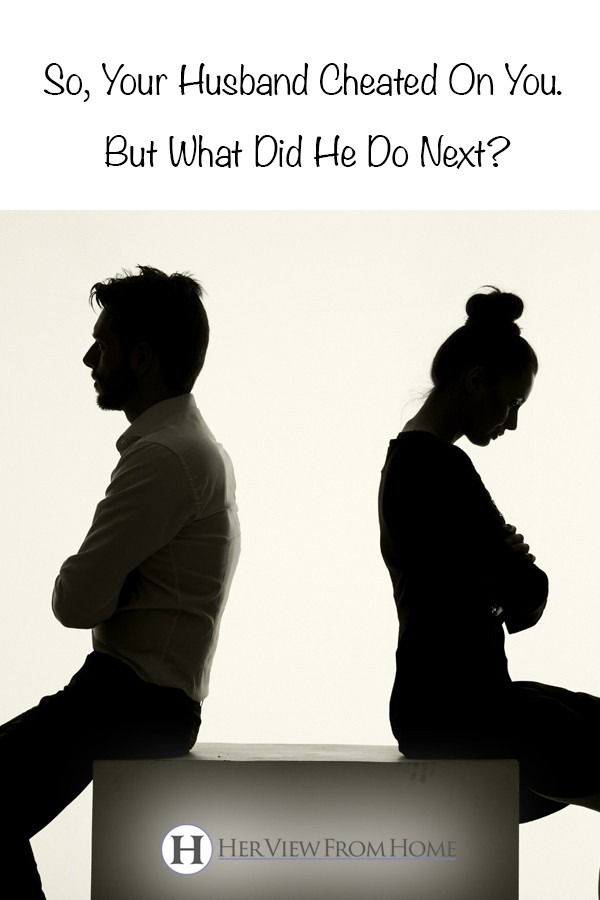 Jodie Utter is a freelance writer & creator of the blog, Utter Imperfection. She calls the Pacific Northwest home and shares it with her husband and two children. As an awkward dancer who’s tired of making dinner and can’t stay awake past nine, she flings her life wide open and tells her stories to connect pain to pain and struggle to struggle in hopes others will feel less alone inside their own stories and more at home in their hearts, minds, and relationships. You can connect with her on her blog, Utter Imperfection and on Facebook, Instagram, or Twitter.