When he’s 15, you may find him texting heart emojis to a girl you’ve never heard him mention before. Curiously, you may feel weird at first, even jealous—who is she? Don’t bring her up. Wait until he does, or risk having him clam up completely and put a passcode on his phone.

When he’s 15 he will very likely go over data.

When he’s 15 he will eat his weight in buffalo wings, yet still be lean, lanky, and trim. He will devour a bacon cheeseburger, pound of fries, chocolate ice cream, and amazingly be able to feast on cookies an hour later without gaining an ounce. Lucky him.

When he’s 15 you may look for traces of babyhood in his face while he sleeps, but instead find a prickly upper lip. Fabulously high cheekbones. A strong jawline. You may wonder where that cherubic baby with the arm rolls went. They warned you it goes by fast. They were right.

When he’s 15 your ears may bleed as he blasts Cardi B, Avenged Sevenfold, and Fetty Wap on the car radio. Bite your tongue. Remember how you felt when your mother referred to Nirvana as “those freaks”. Ditto for Pearl Jam. Be thankful he can name all four Beatles, and appreciates 90s rap. You did good, mama.

When he’s 15 he will start getting invitations to high school parties. Expect heart palpitations as you recall the various follies of your own youth—your mind racing with a myriad of scenarios.

Will there be alcohol?

Will there be pot?

There will definitely be girls!

Despite 15’s protest, walk him to the door. Make sure the parents will be home all night. He will bemoan you’re the strictest mother in all the land. Let him. Proudly wear that title like a tiara.

When he’s 15 you may fumble when he asks if you ever did any underage drinking. Be honest, but not too honest. He needs to know you are human. He doesn’t need to know the details of your senior year Jersey shore trip.

When he’s 15 he may suddenly announce he is atheist, stating that the world is just too filled with bad things for God to exist. This will cleave your heart. For he’s now old enough to see the world isn’t always a kind place. Tell him to look for the good in people. Tell him to be kind, but take no crap. Don’t begrudge him. He’s thinking for himself. This is a good thing. Two weeks later when he asks “Do you think dogs go to heaven?” as he holds the beloved family pet, it feels like a baptism as you answer an unequivocal YES!

When he’s 15 you may mistake his independence for indifference. He does care. It’s just buried under all that testosterone, acne, and mood swings. A lot is happening here. Be patient. The road to adulthood is littered with potholes. He needs you as much as you need him.

When he’s 15 make indirect communication your best friend. You can attempt to stare into your son’s eyes and lecture him about screen time, but he will tune you out. Want to get him to open up? Remember this sage equation: males=motion. Talk and walk. Talk while slicing carrots for dinner. Talk while bringing in the groceries together. Any type of movement will help offset the awkwardness he may feel talking to Mom.

When he’s 15 he will notice women’s bodies. This may unnerve you—a feminist—as he ogles and stares. You will vehemently swear men are just born pigs, but tread carefully here. His feelings are normal. Don’t make him feel like a Neanderthal. Teenage boys tend to be visual creatures. Gently remind him a woman is much more than her body. Teach him a beautiful soul is worth more than a gorgeous face and a slim midriff. Don’t just tell him to respect women, instead show him how. Instill in him no means no, not maybe, despite what Hollywood movies may show.

When he’s 15 he will use words that you don’t understand. Salty, JUUL, and thirsty may be completely lost on you. Urban Dictionary is your friend, mama.

When he’s 15 teach him how to check for bald tires, flip an omelette, write a good thank you note. Remind him to clean out the lint trap in the dryer. His future wife will thank you.

When he’s 15 make sure he calls, not texts his grandparents on their birthdays. Grandma may very well be tech savvy, with her turquoise medallion pop socket, but nothing can replace a heartfelt conversation. Enlighten him on the art of actually talking to people face-to-face. Interpersonal skills never go out of style, and much is lost in translation via a quickly drummed out text.

When he’s 15 you will realize, with a twist in your heart, you only have three more years with him at home. Resist reminding him. He won’t understand. Cherish this time. Hug him a lot. He may squirm. Do it anyway. He secretly wants you to.

When he’s 15, his teenager firsts will blow away his baby firsts. Sure it was amazing when he took his first step, got his first tooth, but when you see your child with a smear of shaving cream above his lip, steadying a razor, you will watch in awe, wondering when your cooing infant became a man. 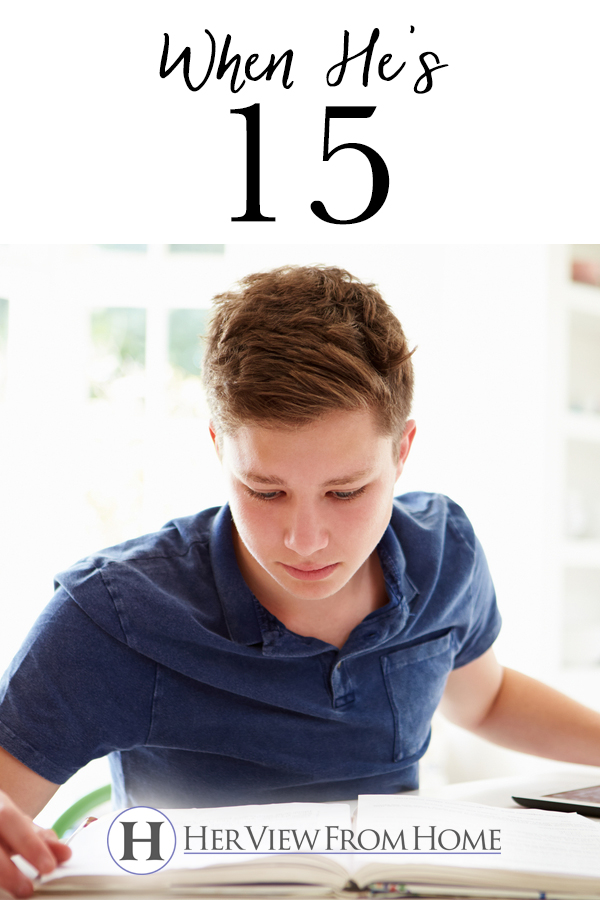 Claudia Caramiello is a certified pharmacy technician by day, freelance writer by night, mother of two teen sons both day and night. Hailing from New Jersey, she survives single motherhood on caffeine, humor, and listening to Twenty One Pilots. Her articles have been featured on Scarymommy, Bluntmoms, Sammiches and psych meds, Elephant Journal, and Moms & Stories. You can find her on Facebook at Espresso & Adderall and read more from Claudia on her blog, https://wordblush.com/