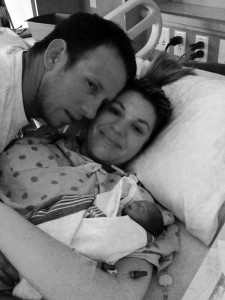 In 2013, I found out I was pregnant with triplets. My husband and I were in shock, but thrilled at the news after dealing with infertility for years. And it didn’t take long for the comments to begin. When people found out, the usual remarks followed: Triplets?!?! What are you going to do? 3 kids at once?!? Glad it’s not me! After mastering my response (and sometimes an evil look), I figured that was the worst of it. But little did I know, I would be facing far worse comments after two of my triplets passed away.

On June 23, 2013, I gave birth to my triplets, more than 4 months premature. My daughter, Abigail, passed away that same day; my son, Parker, died just shy of two months old. Before then, I didn’t know much about child loss; it was uncharted territory. Like most people, I wouldn’t know how to respond or what to say if a friend’s child passed away. But two years later, I have found that some things are better left unsaid. These comments come from a good place and I know people mean well, but they sure do sting. Here are my Top 5 things not to say to a grieving parent:

Everything happens for a reason

It’s a cringe-worthy comment for those of us who lost a child. Sometimes, there is no rhyme or reason why things happen in life. A parent should not outlive their child. I don’t know why my body couldn’t handle my pregnancy or why I went into labor at 22 weeks. This phrase goes along with another I often hear: “God only gives us what we can handle.” I remember talking with my childhood Rabbi the night before my son passed away and I asked her, why me? Her response is something I now live by every single day. She said, “God doesn’t give us only what we can handle. He helps us handle what we’ve been given.”

They are in a better place

Excuse me? Instead of comforting, this is a phrase that makes me feel down in the dumps. I longed to be a parent for so many years. Children are meant to be in the loving arms of their parents. I think I speak for every grieving mother and father when I say, we would give anything to hold our babies again.

At least you have one survivor, Count your blessings

So you’re telling me that having one survivor makes up for losing the other two? I like to think of myself as a positive person. But even 2 years later, my heart still aches for Parker and Abby. And on the most difficult, dark days of grief, it’s hard to “count my blessings.” Yes, I am blessed. I have a gorgeous miracle child who is the light of my life. But, Peyton should be playing with her brother and sister in our home, not just waving to their pictures and blowing kisses to heaven.

You are still young, you can have more children

It doesn’t matter whether our biological clock is ticking. Many people have no idea what couples go through to have a child. Some can’t have children of their own, others may face years of infertility or miscarriages. And for people like me, trying for more children may be something too scary to even think about. I came close to death after delivering my children, that’s enough to scar me for life.

I don’t know how you do it. I couldn’t imagine losing two children

Some days I don’t know how I do it either. But, we learn how to live with it. We learn a “new normal,” and in those tough moments, we celebrate that we survived the day. This comment is a difficult reminder of our grief and the children who were sent to heaven. 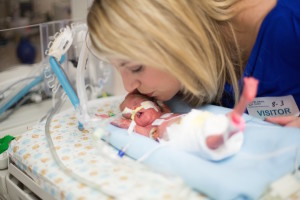 So, what should you say to a grieving parent? There are no words to take the pain away, but simply letting that person know you are there for them is more than enough. For me, the best thing someone can do is to talk about my angels. Say Parker and Abby by name and don’t be afraid to ask questions about them. While they were only here for a short time, they left a huge imprint on this world. I love talking about my angels, and simply hearing someone else mention them by name, is enough to wipe away the grief and warm my heart for days.