There was a time not long after our two older girls were toddlers and entering school, that I wanted to add to our family. My husband was content with two children.

We finally agreed, two girls would complete our family picture. But you know what happens when you become content. Right about the time my husband accepted a job in Nebraska, and I left my television job to make the move, we learned we were expecting our third daughter. Because apparently we needed more change in our lives, and because apparently our plan was not the perfect one for us. Not once have I ever referred to this precious human being as an “accident” (I KNOW how these things happen people….ok!!!)—rather we welcomed Taylor as a sweet surprise and an unexpected blessing.

But then the gap began. There are basically 9 years between Taylor and our oldest daughter, and six years between her and our middle daughter. I know that’s not a lot, but when you think you’ve closed the book on babies, any gap is big. It’s also big in terms of life stages as children grow. I remember people “suggesting” we have another child soon after, so Taylor would have a “friend” as she grew up. Are you kidding me? Um, thanks…we’re good. We’ll find friends for her, and she’ll have her sisters! Well, while she is blessed with two of the best big sisters,  they did kinda have their own thing going before she came along—so adjustments needed to be made. They were and always have been great helpers. But they’re busy too, and the fun wore off way sooner than any of us imagined, which meant it was time to start addressing the obvious.

I remember first noticing the “gap” when Taylor was two. I would drop the other girls off at their “big kid” activities,  and she wanted to go along. She started realizing she was being left out of whatever fun they were having. I knew in my heart this was just the beginning of a lot of “mommy and Taylor” time, waiting to pick up her big sisters. The gap seemed to broaden as her sisters entered middle and high school. Their social lives were expanding while Taylor was barely old enough to sign up for preschool–much less join the “social elite.” The littlest in a family always seems to grow up faster, because of having older siblings and being around their friends too–which Taylor loves more than anything. Their friends are her friends in her mind. She has never seen any reason why she shouldn’t be in the same room sharing secrets, or taking part in whatever fun is being had. But the gap makes it tough sometimes. Big sisters don’t always want their little sibling around when they’re hanging out with friends or looking for some alone time in their room.

I find myself anticipating the “gap” too. The one that looms ever so close, is the one that will happen when our oldest daughter graduates high school and leaves for college in a year and a half. Taylor will be in 3rd grade. They are especially close, so I find myself worrying about how tough it will be for Taylor to see her big sister leave. I had no idea until recently, that it’s also weighing heavily on her heart. An email from her teacher arrived, letting me know she had asked Taylor why she was so quiet one day–to which opened the flood gates and brought the admission that she didn’t want her sister to leave for college. My heart sank.

Within 5 years, both older girls will be out of the house, and Taylor will be our one and only. That gap scares me the most. Will her big sisters stay in touch? Will they make time to come “home” to attend her activities, or just to hang out? Will they be able to relate to each other like sisters should? That part may take time I realize. There will no doubt be some years when the connections won’t be as strong. But I pray, it won’t last long. I feel pretty confidant they’ll always have each others backs, even through their different life stages. For now, we’ll remain content, and keep filling in the gap as we go! 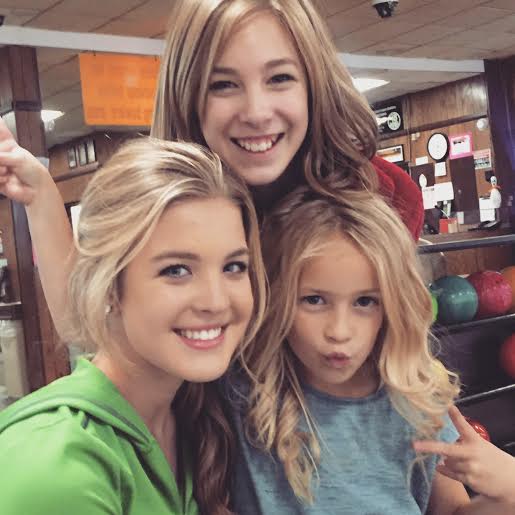