From Chemo To Clintons – A Survivor’s Story of Friendship

We sat with them by the beach. The beaches of Oak Island, North Carolina. We met each other the very first day, mostly because we were the two Midwesterners in attendance. The Nebraskans and the Iowans.

We were there for the same reason. We are both breast cancer survivors. Both Janelle and I went through chemo and surgeries and are now lucky enough to be cancer free. So we sat at “Adult night” at the Flying Fish, the third or fourth night into our Little Pink Houses of Hope Retreat {a retreat for those who are going through or have gone through Breast Cancer}, and chatted.
And after a bit her husband said, “Well…”
What followed was fascinating. On October 24, 2015, Janelle (Turner) and her daughter, Nora, attended a Jefferson Jackson Fundraiser dinner in Des Moines, Iowa. Partly, they attended because Janelle has always had an interest in politics. And partly, because her 9-year-old desperately wanted to see Katy Perry perform that day. Janelle waved a poster in the air. It read, “13th chemo yesterday 3 more hear me roar!” And a familiar face started walking towards them. President Bill Clinton. He chatted with them for a bit, Janelle snapped photos, and she was thrilled to have just had that once in a lifetime meeting.
Until it wasn’t. It wasn’t once in a lifetime because a police officer approached Janelle and her daughter and invited them back stage where they proceeded to meet and talk with Hilary Clinton, spent more time with Former President Clinton, and her daughter’s highlight, Katy Perry.
And after meeting Hillary in person, Janelle and her husband were sold. Prior to meeting Mrs. Clinton, Janelle was excited about the prospect of a woman in the Presidential seat and believed Hillary was smart enough to hold the honor. And meeting her completely sealed the deal. “Keep in mind, I was just coming off 5 months of chemo… We have a great opportunity to see candidates up close and personal the summer before the caucuses. I just didn’t feel well. Nora really wanted to see Hillary. Finally in October, we could go because I was feeling better on the Taxol. It was an amazing day.”
But it wasn’t just the day. The Clinton team has stayed in contact with Janelle and her family since that day. They have become, as her daughter, Nora, says, “friends.”
“Sounds contrived, but when she speaks with you, she gives you her undivided attention – as if you are the most important person in the room. She is very relatable. Her demeanor is very calm,” Janelle says of Clinton.
Janelle has appeared in a video supporting Clinton and sharing her story of their chance meeting.
She also said that since meeting them, Nora, has dreams of becoming a political activist.
The big surprise came when Hillary came to Iowa recently and asked that Janelle and Nora be on stage with her, sharing their story of battling breast cancer, completing chemo, and attending the rally. And then, again, an even larger surprise when Janelle received an invitation to be among Clinton’s guest at the most recent Presidential debate.
“There was a lot of tension there Sunday night. My stomach hurt, and still does. Obviously, I’m a Clinton supporter, so I kept thinking of Michelle Obama’s quote, ‘when they go low, we go high!”
From cancer diagnosis to standing beside a candidate for President of the United States. For someone who had never been to a political rally before but had a heart for politics, Janelle says that it has been one of the most incredible experiences for her family.
I asked Janelle what she would say to someone who is thinking of not voting in this election. And no matter what side of the aisle you stand on, or if you’re right down the middle, I think her words are spot on, “It matters. Perhaps more in this election than ever before, voting matters. This election will have a greater impact on my daughter’s life than mine in some respects. I have voted in every election since I was old enough to vote. We always take Nora with us when we vote. You can’t complain if you don’t vote.”
It’s true. This election will have a great impact on not only our lives but on our children’s. It is up to us to make an educated decision and get to the polls to cast our vote.
Janelle and her husband are just normal people. As a fence sitting voter myself, I asked Janelle that evening on the beach, as we discussed our lives and politics — before she’d gone to the second rally, before she’d been invited to the debate, but just after she’d been called a “bad actress” by internet trolls — “I have to be honest, Hillary seems sort of cold to me. Sort of removed from real life. What was it like to meet her?”
“She’s nice. Really nice. In fact, Nora said to me the other day, ‘Mom, you know what’s hard about being friends with the Clintons and Katy Perry? We just don’t get to see them that often.”
…
At Her View, we are not backing one candidate over another but we are encouraging all of our readers who are able and eligible to get out and vote in November. We hope you enjoyed reading Janelle’s view and are so thankful she shared it. 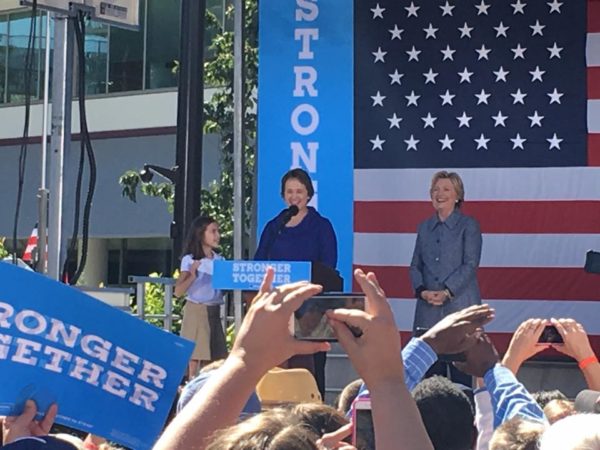