We thank our wonderful viewers for their personal contributions in honor of “Pregnancy and Infant Loss Awareness Day.” Each woman who submitted a story shared the same message. They hope that their words can offer comfort and support to those who grieve, knowing many do so alone. There is help for those who need it. We are here for you!

My husband and I were overjoyed when we got pregnant for the first time after only trying for 6 months. We thought that was the hard part. I did everything right, started taking prenatal vitamins as soon as we were trying to conceive and took extra good care of all aspects of my health. Our world was turned upside down when we lost our baby at about 7 weeks. I went through all kinds of emotions, anger, grief, and disbelief. For my husband, it was different. He was more worried about me. I was amazed at how fast I went back to feeling normal physically which made me even more angry.

I relied heavily on my husband, our parents, and pastor. I personally did little things to help me to never forget, such as, saving a little outfit I had bought, journaling about it, and most important to me was naming my baby. Now we are facing the hard part of trying again and the fear that surrounds it all. I still get sad and shed tears but I know in heaven baby Rae will be there for me to hold. Until then I hold my baby in my heart.

Aaron and I were married on October 9th, 2004. On December 6th I found out we were pregnant with our first child. I awoke on December 13th at 5:30 a.m. in a lot of pain. I had had kidney stones when I was 19, but knew this pain was different. Aaron and I waited until the Kearney Clinic was open at 8 a.m. The doctor confirmed I was pregnant, but the pain concerned her and I was sent to Contemporary OB/GYN. There, they performed an ultrasound where they found I had an ectopic pregnancy. The baby was in my tube. The doctor told me that we could wait a week and do blood test to see if things would change since I was only about 5 weeks pregnant. A week later (December 19th) I went back and the hormone levels hadn’t changed enough for the pregnancy to be viable. Because I was only 6 weeks pregnant at the time they were able to inject me with a shot that dissolves placenta cells and would be an easier procedure then a DNC. 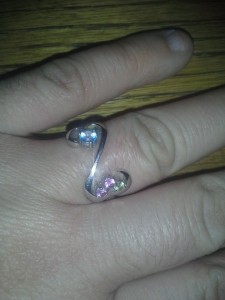 We were devastated to lose our first baby. It took us about 6 months to decide to start trying again. Arnold was born a week before our 4th Anniversary, and Orin was born 2 weeks after our 7th anniversary. We are blessed to have 2 strong, amazing, sons but my heart still longs for the child we never met. Joy’s husband and sons presented her with this special “Mother’s Ring” this year. The stones honor the loss of her first baby, and the birthstones of that child as well as her living sons.

It was August 2008. My husband and I had a four year old daughter and a one year old son. My pregnancies with our first two children were uneventful: no problems, very little sickness, and overall I loved being pregnant…what an amazing gift! I was just starting to get excited for our third when something went horribly wrong. I didn’t feel sick that day, and didn’t have cramps. I felt absolutely normal. I was exactly ten weeks along. This miscarriage would end up lasting about two and a half months. Yes that is months, not weeks. It was horrible. It was my first experience with a cold, medical response.

I understood that miscarriage was common, but I did not expect there to be very little compassion from my doctor and nurses. I hated hearing “You can always try for another one.” I wanted that one. Only one nurse took the time to hold my hand and tell me that I would never be the same. That I would never forget this day. She hugged me. She let me cry. That was the one and only time I ever saw that woman in that office. She was compassionate. Each and every week for two and a half months, I had blood drawn waiting for my Hcg to zero out. Every single week it dropped but not much. It was torture. My questions of “Why was it taking so long?” and “Why did this happen?” were met with “Sometimes it takes time.” and “They are very common”. Not real answers, in my opinion. I endured being asked why I was crying at follow up appointments and being told it would be fun to try for another as if this one didn’t matter, as if it never happened. I couldn’t believe it. Only after passing “products of conception” at the end of the nightmare did my doctor admit he maybe should have done an ultrasound. Two and a half months my body didn’t know if I was pregnant or not. It was horrible.

My second miscarriage happened four months after the first finally ended. Same thing….no symptoms. I was eight weeks along, he rushed me to ultrasound and I remember seeing the embryo, my baby, on the screen surrounded by the movement of the blood going through my body, but not through its own. I didn’t need the tech to say a word, I already knew. Again the response to my questions were always, “These are common… they just happen…something was wrong”…but I wanted to know why? It wasn’t common for ME.

During my first miscarriage, I joined a Pregnancy Loss/Miscarriage support group on CafeMom. I had to talk to someone who had been through it, find out what their experience was and what they found out caused theirs. There were so many women on there and it felt good to have the understanding of people who knew the pain, instead of those who couldn’t imagine the pain. Don’t get me wrong, I was surrounded by family and friends who care for me and I appreciated their support, but they hadn’t walked down this road. They didn’t understand the guilt I felt, though I had done nothing wrong.

It was a very difficult time. I just needed people to listen. Listen to my maybes, my what- ifs and not respond at all. That’s what I needed. My reaction after the first was sadness. Overwhelming sorrow and true grief. The reaction after my second was still sadness and grief, but it was followed by anger. It was at this time I sought a pastor to have my lost babies be acknowledged and accepted into heaven. I felt so horrible that they were just kind of forgotten or that it felt like they weren’t really real. I left the church that day feeling like a huge weight was lifted. I felt comforted. It was at that point that I truly began to heal on the inside.

I quickly found out that the medical profession does not really get worried about miscarriage until a woman has three. Why is that? My third child would have been my third miscarriage had I not pushed my doctor to check my Hcg and progesterone. My progesterone was falling and the supplements I took saved his life. I learned about that being the cause of some miscarriages on CafeMom. What? I understand that is not the cause of all by a long shot, but why isn’t that just a standard check? It’s a simple blood draw. I was given a book at the hospital after my second loss, but I really could have used it after my first.

I love that there is a day dedicated to those children that are lost. I know my experience is not matched to other mothers who had later term losses or infant loss. It’s an opportunity to feel like you are not alone in remembering what was lost.

I have a story to share. Back in 2008, we found out we were expecting our first. We were so excited. I had some pains but the “doctor” we saw said I was fine. She never did any tests. I had an ultrasound done with a different doctor and we were already 13 weeks along. Everything went fine for a month. On June 7th I started cramping. I called the doctor and they said bed rest and come in on the 9th. I went in the 9th and they sent me for an ultrasound. The look on the techs face said it all. My precious baby had died. I was 17w 5d they estimated when he died. They sent me home. I was in labor they said, and things would “pass” on their own. This was my baby. Not a “thing”. It was the worst day of my life. I never felt pain like that. It was emotional and physical. We had already named him Gus. We didn’t like not having a name when we first found out we were pregnant so we chose Gus.

I ended up pregnant again. I lost that baby around 6 weeks. After a surgery to remove two cysts on my ovary, I was pregnant again. My new wonderful doctor did everything he could for me to save my baby. After a long, hard, pregnancy, I had my beautiful baby girl. 20 months later, my second baby girl was born.

One child does not replace another. Most of the family has forgotten about Gus but I’m his mommy and I never will. He now has two of my close friends’ sons up in heaven to play with, and cause trouble with. No mommy should ever have to say goodbye to their baby. But I am a proud mother to my Angel babies and I know they are looking out for their little sisters. They have kept them safe thru multiple surgeries including brain surgery on my baby.

October isn’t just about breast cancer but no one wants to think about innocent babies that have died. I will always love all my babies. It has made me a stronger person and I have been able to help my friends who also had to say goodbye to their sons. One at 4 months old due to SIDS and one at 23 weeks due to placental abruption. RIP Gus, Isaac, and Oliver. And all your little angel baby friends. We love you. You were just too perfect for earth.