*Note* This is part 2 of Mike’s weight-loss journey.

Well that’s it, I reached my goal. Now, to just maintain, right? My problem was I wanted more. I saw my body shaping; I saw I had more to lose. So why not 215, make it an even 30lb weight loss. I can do that by my one year mark in October. However, my body had other plans…plateau number two.

Many people would be happy with that, I reached my goal. Remember, I made myself a little promise to post the before and after picture on Facebook. Thoughts kept going through my head. Why would I go through with that? Why subject myself to that? Finally, I washed them all away. I made a promise to myself. If I can’t keep my own word, to myself, what’s that say about me? Ultimately, this is about being fit. So, wouldn’t 215 be better?

You may notice I say fit not skinny. There is a big difference. I have no desire to be skin and bones. I have no desire to see anyone that way. Fit is tone. Fit is a lifestyle choice. You can lose weight and be healthy. You can’t get fit without hard work. That’s what I wanted.

To be fit I also had to do something I never thought about. I had to cut down on drinking beer. Those nights of drinking beer and overly enjoying could be a 1,000 calorie night or even a 2,000 calorie weekend. I had to quit sabotaging myself. It was time to drink hard alcohol instead! Hey, every bit helps. This is a lifestyle change, cutting out beer and alcohol all together isn’t realistic for me, but drinking healthier made sense.

By late August I knew I also needed a workout change. I was not a fan of long runs, so I figured biking would be a good option. I worked my way up to 10 miles a couple times a week. This took more time out of my day… this took dedication. By now I had forced that desire back, the desire to be better was finally driving me, that desire we lose by getting comfortable. It was there pushing and pushing me. It was me against me and I was going to win.

Although this was a much harder plateau to get through I finally did. By October I had lost 30lbs. 215lbs! A place I hadn’t been since early college. I fulfilled one of my driving forces and posted the results to Facebook. 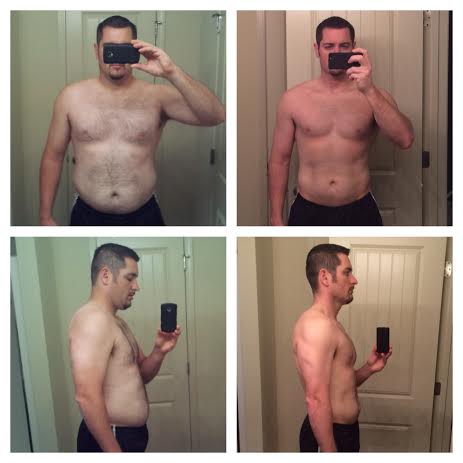 My goals were all exceeded, I had lost 5.5 inches from my waist, I had gotten all the “you’ve lost weight” reactions and I felt great. Now…now was the time for a maintenance plan, and at this point it was entering winter so I was done running or biking.

I began focusing on where I was and what I needed to move forward. I began to respect and value my hard work. My body began to change my normal, it wanted more water and it wanted more nutrition.

I decided to make a space in our basement and buy a bench set and some weights and get back into doing some weight lifting. The thing I realized quickly was how easy that was. As I got over the initial soreness and weeks went by I found the desire grew, I had to workout, it felt great. At least it did…

My age finally caught me. While apparently over compensating for what was my “bad” shoulder, my good one was now the worse one. I knew I tore or severely strained something. I just kept doing what I could to avoid the pain. I didn’t want a shoulder scope to sideline me now. I kept at it and pushed through; the amazing thing was I kept losing weight. I hit 210 around December.

I was in uncharted territory.

January came around, the time of the year for new resolutions. At this point I was well past where I thought I would be. I needed a challenge that was crazy. Something that would really challenge and drive me. I craved the workouts; I craved the satisfaction from all the personal milestones along the way. Why not make it an even 50lb weight loss? Not many people can say they lost 50lbs. But 195 is something I haven’t seen since probably day one of college. That’s just crazy enough it might work.

I had to change my routine again. I also need to heal my shoulder. I realized I would have to step backwards if I wanted a chance to step forward. I needed my shoulder at 90%-95%. Realism, getting older, whatever you want to call it, I never expect them to be 100% again. I began to do rehab exercises and do lifts that seemed pathetic. 5lbs, 8lbs, 10lbs dumbbells. By the end of January I started to feel results. The pain was going away, strength was coming back and by February I was getting back into heavy lifting.

My main problem now was that I was gaining muscle. My results were going to counter my weight loss goals. I need to feed my body, but limit the calories. I needed an adjustment to the way I took my nutrition. Time to venture into the world of supplements. I wanted to keep things as natural as possible. I wanted to get the nutrition I needed to gain the muscle, not the fat. I also don’t want to be on 10 different pills. That led me to protein shakes, another huge world of information. As in everything else in my process, I went for convenience and they happen to sell Muscle Milk protein shakes all over the place – so I bought a couple.

After my next workout I had one. I had certainly tasted better things in my life. I was hoping for better, after all, this was going to be a new staple in my life. A new part of my life change. After the next work out I decided to gut down another one, you know, for the cause! Somehow it didn’t seem as bad. By the fourth workout I was beginning to crave the chocolate shakes. It was like a reward for my workout. I was already hooked and to this day it feels like a reward every time. The best thing though, my body started to respond to this simple reward.

I was beginning to see my weight lifting go up and my body definition grow. However, by late February my weight was sitting around 205 and not really moving. This was probably close to the end of my road for actual weight loss. Or was this another plateau? My gut (or fat on it) told me this was a plateau.

I refined my portions again, still eating a lot of what I want, but keeping my overall intake low. I am still not tracking my points, but my mind knows what’s healthy. I also noticed another thing; I really didn’t feel like having that one soda a day anymore. What if this die-hard Mountain Dew drinker stopped drinking it?  At this point, I had already only been drinking one every couple days. Why not just go a week and see. Two weeks in to that change and continually improving weight training workouts, I was seeing scale results again.

April arrived with amazing news…200lbs! With the second phase of this plan, the biking cardio about to kick in things were heading in the right direction again. It was time to bear down and push myself to my final goal…lose 50lbs!

A place I never thought I would be. To be honest, a place I didn’t think was even possible. Day in and day out. Being persistence, forcing myself to workout, when I had dozens of excuses. Being insistent, eating smarter when I had hundreds of other options. Looking back it is amazing how so many small changes led to one big change. Almonds have replaced potato chips, ice tea has replaced soda, smaller meals replaced large ones and fries with salads are just a few. Mastering one change then adding another. If I would have gone cold turkey and made all these changes at once, sure I may have lost weight faster. However, this wasn’t a one month challenge.

I have the rest of my life to stay fit and it will contain new challenges. Constant motivation will be a staple in my life and perhaps the best are right beside me; my wife and children. You can’t tell your kids to pick up their stuff while you don’t. You can’t want them to be healthy while you kill yourself with fat. They deserve the best I can provide and they deserve the best me I can be.