He grew up right before my eyes.

My little boy is still just four years old, though, so I guess I should explain what happened.

Last night, as we curled up on the couch with a movie—his eyes sparkling and engaged, a giggle exploding from his belly—I found myself staring at his profile . . . and clutching my heart.

I was struck by how much he’s changed already and by how the time has flown. And I felt broken when I realized the next few years will disappear just as quickly.

My imagination got away from me, creating a magical metamorphosis.

I ran through the catalog of memories in my mind. I watched, with a dull ache in my chest, as his sweet little face transformed into the baby he used to be, nearly half a decade ago. Somehow, it feels like yesterday. But time is funny like that. Sometimes a memory hits so hard—it feels so true in the present moment—that I’m convinced I’m still living it somehow, in some other realm, as if all the moments of my life are running parallel to each other.

Then I saw his cheeks plump up and his hair grow shaggy, as he transitioned into the toddler years—the years that have just slipped through my fingers. I thought about the moment he offered his first “I love you.” I remembered my excitement when he took those brave first steps.

RELATED: There’s Nothing Sweeter Than the Moment Your Child Falls in Love With You

And then, with the blink of my eye, I saw him at maybe seven, the precious gap in his teeth reminding me that all of the baby things are replaced by grown-up counterparts eventually. I tossed up a quick prayer that he would always keep a child’s heart and sense of wonder. Those things should never grow up completely.

But this moment caught me off guard because I was no longer seeing my memories.

Instead, I was looking into his future, as I watched him morph and change right in front of me. And I couldn’t look away.

Elongated now, his face had thinned out. His eyes suggested they knew more than they should. Because just like that, he was a teenager. Lanky and smelly, no doubt, and with an on-trend haircut I knew I’d nag him about relentlessly. I could see in his eyes that he was still so sweet and lovable—he just didn’t have the same use for me anymore. And that made me desperate to cling to him tighter.

And then he became a man, fully grown and old enough to be on his own. Independent and self-sufficient, with big ideas and endless dreams. In a matter of mere seconds and right before my eyes, my little boy had changed forms many times.

From the baby I’d kissed and nurtured in my arms, to the good and gentle man he was destined to become, I could so clearly envision each stage.

And as hard as the little years can sometimes be, I couldn’t ignore the sharp pain in my heart. It was a pain that pleaded, “Let him stay small for just a bit longer.”

I pulled him in close, wishing we could stay there forever and somehow cheat the passage of time. He returned a big hug, but then he pushed himself away so he could get back to doing his thing.

And that’s the way it’s gonna be. The point is to raise him and love him well enough that he can capably and happily stand on his own.

Just let me say this: I will never forget what a privilege it is to watch a little boy grow into a man. I know how many people have lost out on that chance, and I will never take for granted the stages we get to experience together. I’m forever thankful for it all.

I just know that very soon, we’ll be watching each other from different vantage points. Our lives will always be intertwined, but soon enough, the life that’s ours for this brief moment will not be shared anymore. His life will be just his, and he’ll gently nudge me away.

One of these days, I’ll put my arm around a man, and I’ll wonder where the little boy and all those years have gone.

That time, much like these few moments we shared on the couch, will pass us by with the blink of an eye.

RELATED: He’s Almost a Man But My Son Still Needs Me

I can’t let myself worry it away. I don’t want to get so caught up in the fear of losing his littleness that I forget to enjoy the moments of growth. I don’t want to hold so tightly to all the lasts that I miss the firsts and the middles.

This kid will always be my baby. That’s a bond that can’t be broken—not by time or distance or obstacles or growth. And any time he’ll let me, even when he’s a grown man, I’ll hold him close and gaze at his profile. I’ll let him transform into someone little in my arms and in my eyes again.

And I’ll pray to have just one more minute.

We love this boy mom shirt from our Her View From Home shop! 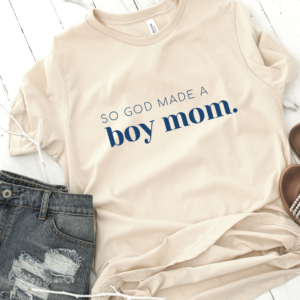 I'm Cassie, and I'm a writer, mama, Jesus enthusiast, cliche coffee drinker, and lover of all the stories. I believe in the power of faith and empathy, radical inclusivity, and the magic and beauty of ordinary days. I'm inspired every day by the firm belief that we owe something to each other—love and human connection. When I'm not writing, you can find me running from dinosaurs, building castles, pursuing joy, or watching the sun rise over the fields of Nebraska (coffee in hand) where my husband and I are raising two spectacular children. For more stories, visit my Facebook page, From the House on a Hill with Cassie Gottula Shaw; Instagram, Cassie Gottula Shaw; and the blog, fromthehouseonahill.com.