It always starts near the end of August. Still clad in t-shirts and shorts, my son in time with the overly early stocking of Halloween candy on grocery shelves, begins to consider his costume options. Every year, his debate runs the range from super hero to traditional ghost. I smile as listen to his consideration of every option, knowing his choice will change several times before he makes a final decision three days before Halloween.

Even though my thoughts still linger on sitting poolside, sun-soaked and warm, I excitedly participate in these discussions because I know the importance of choosing the right costume. I remember the consideration I gave to it long before my son was born.

It wasn’t for myself. Instead my deliberation of the perfect costume was for my child. Not the one I had but rather the one I longed to have during the prolonged and painful time when I wasn’t sure I could have a baby.

During that time, my longing twisted even the mundane moments into heartbreak. Walking the aisles of a store could turn me to near tears as I saw moms holding their sweetly nestled babies or slowing their strides to keep pace with their chubby-legged toddlers. My heart would feel heavy in my tightened chest as I passed racks of miniature clothes and piles of neatly folded baby blankets.

Holidays, in particular, caused a unique brand of pain. Families crowded in line to see Santa and babies dressed in Easter bunny ears caused, for me, an ache that felt physical as much as emotional. So it wasn’t unusual that seeing a display of tiny Halloween costumes caused a catch in my throat as I looked at each one longingly.

Although I tried to envision my own baby as I looked at each one, there was only one costume that caused me to clearly see the baby I so longed to have. It was a chicken costume. Bright orange feet and beak bookended the soft fluff of white fake feathers. I rubbed my fingers across the downy-soft front and said to my husband, “I want a baby chicken.” 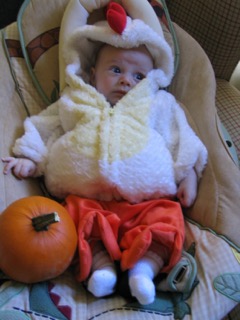 Three months later I became pregnant with my son. And ten months after that I held my beautiful tiny baby boy wrapped and zipped in a feathery chicken costume. Swaddled and lost in billowing folds, his teeny head bobbed inside the face covering. My husband took pictures as I proudly held our baby chicken.

There was really no purpose to the costume. After all, he was too young to trick or treat and no one except my husband and myself saw him dressed up. But this costume mattered. So I’ve always not only understood but also enjoyed my son’s enthusiasm to choose his costume each year.

He has been a monkey, a puppy, a yellow crayon (so he could color the sun), Thomas the Train, a Ninja turtle, Iron Man, a ninja and a skeleton. Each were carefully debated, chosen and worn with the exuberance only a small child can possess. And I have loved each one because they all have represented a stage in my little one’s life. So, I was a bit disappointed when August passed and there was no discussion of costumes.

Figuring that my son now had a better sense of the seasons, I waited. After receiving several Halloween costume catalogues, I carefully broached the subject. The discussion abruptly ended when my son said, “I don’t want to dress up this year.”

Baffled that my little boy—who loved to dress up—now refused, I bided my time before asking again what costume he wanted. Again he told me he didn’t want one. I reminded him how much he loved dressing up. Steadfast, he disagreed. Although not a written rule, I proclaimed that he couldn’t go trick or treating if he weren’t costumed. Sounding like an empty threat it was my panicked effort to keep my child, well, a child.

More days passed and I wondered at the swiftness and cruelty of time to steal away my baby chicken. Of course, I know that all children must grow up but this year, for my little boy, it was too soon. So in a final effort, I asked again.

This time, he answered, “Me. I just want to go as me. What’s wrong with that?” Long limbed and knobby kneed, he was awkwardly curled on my lap with arms that dangled far from my sides. I grinned and answered, “Nothing. Being you is great.” Giving me a quick squeeze, he said, “Thanks.”

Crawling off my lap, he walked towards the kitchen then turning around, he said, “I guess I could I think of something.” Inhaling deeply, I exhaled a sigh of relief and gratitude for one more year. Then I silently wondered if he would consider being a chicken.

Sherry Parnell is a mother, writer and a runner just not always in that order. She lives in the country with two rambunctious little boys, one very supportive husband, and one sleepy Chihuahua. In addition to being a nose wiper, lunch packer and wrestling referee, Sherry is also the author of the book, Let The Willows Weep. She is currently completing her second novel due to be released next year if she can survive another winter of colds, complaints and disrupted sleep. You can find more posts about her experiences as a mother and a writer on her personal blog at https://sherryparnell.com/

The mother-daughter relationship is complicated. This collection of stories by moms currently raising teenage daughters will inspire you to work on your bond with your daughter.

Your Teen Guide for Parents is on its way! Be sure to check your spam folder or junk mail (Gmail users - check your promotions tab).