I had my first open heart surgery at 7 days old. My 2nd surgery didn’t come until I was 10 years old. Living with congenital heart defects was all I knew. It was my normal. It meant no contact sports, sitting out during gym class and no rollercoasters (fine by me!). It also meant yearly EKGs and echocardiograms. No big deal. Looking at me, you wouldn’t know there was something wrong. Unless you noticed my zipper; the scar running down the center of my chest.

I went to college and fell in love. Life was good. We eventually got engaged and after our wedding, I’d be moving out of state since my soon to be husband was relocated due to a new job. I saw my cardiologist every August. But I was getting married in May. My doctor suggested I come in early for a routine visit. He wanted to meet my fiancé, go over my medical history, answer questions and give me for a referral to transfer my care to my new state. So in April, my fiancé and I were off for my last appointment with my doctor. The cardiologist who took care of me my entire life; the doctor who knew my heart better than anyone.

Everything was going great. I laid on the table for a routine echo. The electrodes were placed. The cool gel was squirted onto my sternum. I listened to the swishes of my heartbeat. And then I saw the look on my doctor’s face. I knew something was wrong.

That routine visit turned into anything but. We learned I needed to have my 3rd open heart surgery. My aortic arch was enlarged (which we knew), but it had dilated a significant amount from August to April. There were concerns about aortic dissection which very easily could lead to death. Thank God I was seen in April instead of waiting until summer. 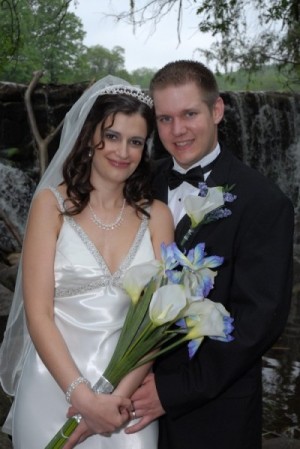 It was hard to hear that news. I had a couple days of feeling sorry for myself and then got over it and told everyone else to get over it, too. Actually, I think I gave that job to my mom because I didn’t want to even think about it anymore. I wanted to focus on our upcoming wedding. I wanted to be a beautiful bride; not a sick bride.

We found out about surgery in April. Got married in May. And in June, I kissed my husband good-bye (praying it wouldn’t be for the last time) and was wheeled into the operating room. I was in surgery for 10+ hours, as my new husband, parents, brothers and a couple of good friends waited in the waiting room. It was closer to 12 hours before my family got an update. Surgery was over, but they had to wait for me to wake up to know how successful it was. There was some concern about possible brain damage from being on the heart/lung machine for so long.

Luckily, the surgery was successful. Recovery was rough. Really rough. Apparently, kids are resilient because recovering as a 10 year old was a piece of cake compared to going through it as a 20 something year old. But obviously, it was worth it.

Years later, I live life just like everyone else does and am expected to live a long and healthy life, God willing. I might have more limitations than others and might have a couple of extra doctor appointments. I might even have to have another heart surgery in my future, but you might too. Especially since heart disease affects an estimated 43 million women in the US.

Heart disease is the number one killer among women and will be responsible for 1 out of 3 women’s deaths this year. To raise awareness, I’m wearing red tomorrow. Go red on February 6th! Learn more at www.heart.org.