The Heart of a Father

I was seven and a half months pregnant with my son, Brooks, when my husband suffered a tragic accident. The accident all but killed him; it left him minimally conscious (basically comatose) and over the course of many, many months he slipped from being minimally conscious to persistently vegetative. He wasn’t on life support, he held his own, but eventually the trauma was too much to bear and he passed away in 2010.

Brooks never knew his father. He never saw his smile; he never heard his laugh; he never felt his embrace. And he never knew anything different. That was the reality he was exposed to at a very young age. As hard as this was for me, I often wondered if the Lord was sheltering him. Is a memory less painful when it belongs to someone else? Would Brooks be aware of the gaping void in his life or would he even realize there was a void because the void had always been present?

Thankfully, we never had to find out the answers to those questions. The Lord had graciously been preparing another man to fill the role of both husband and father. When Patrick came into our lives he knew our situation. He understood what I had lost and he was patient with me; he saw a young boy experiencing life without a dad, and he wanted to be that for him.

From the time we took our vows, Patrick and Brooks have been inseparable. Not only did Patrick say, “I do,” but he also said, “I will.” I will be a role model for this young boy. I will teach him about the Lord and show him the Father’s love through actions in raising him. I will be his dad, and when the time is right, I will tell him about his father. I will love him. I will provide for him. I will discipline him and I will encourage him. I will teach him how to hit a baseball and I will let him crawl in my lap when he wants to cuddle. I will care for him as if he’s my own.

Brooks is Patrick’s son and Patrick is Brooks’ dad. 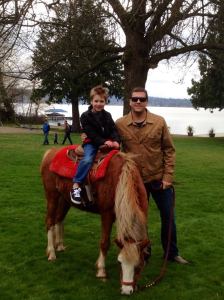 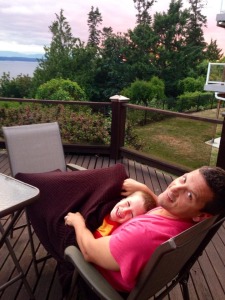 When Patrick adopted Brooks, the three of us went before the judge. The judge was aware of our situation; he knew that Brooks’ father had passed away and that Patrick is the only dad Brooks has known. He was very sensitive to this and the questions he asked Brooks were really sweet. He looked at Brooks and said, “Is this your dad?” Brooks said, “Yes.” Then he said, “He’s a good dad?” And Brooks broke into the biggest smile and said, “Yes!” And then he ended his questioning to Brooks by saying, “And is he going to take you for ice cream tonight?” Brooks smiled even bigger and again answered, “Yes!”

While the judge was confirming the fact that Patrick’s intent was to provide for Brooks, I was struck by the first question asked of him: You’re going to give him an inheritance?

It wasn’t even a question. It was a statement stated in the voice of a question. It was as if the judge was simply implying what happens when someone is adopted and brought into a family but had to do it in such a way that Patrick would confirm this to be the case, in which he did.

For some reason this question wouldn’t leave my mind. You’re going to give him an inheritance? I wondered, “Lord, what is the significance here? What do You want me to see?”

And then I saw it.

I saw the most beautiful parallel. I saw a man with the heart of the Father. I saw someone who loved completely and unconditionally. I saw this man take a child under his wing, wanting nothing more than to teach, impart wisdom and to provide. I saw a man who made it his habit to meet the child’s every need – he fed him when he was hungry, he comforted him when he was sad and he held him when he was scared. And then he took it one step further. He went before a judge to say, “This child is mine. He belongs to me. What I have will be given to him.” And all Brooks had to do was say, “Yes.”

In order for Brooks to be adopted by Patrick, a lot of hoops had to be jumped through. Paperwork had to be completed, forms had to be filed, documents had to be verified and reports had to be made. After many months of this process, our hearing was scheduled and we stood before the judge. The long of it has already been stated, but the short of it is this: Brooks was pursued by Patrick. Patrick wanted Brooks to have access to all that is his so he made his petition known before the judge and his petition was granted. Brooks will receive his inheritance because of his father’s love.

Isn’t this the way it works for all of us? Jesus is pursuing us with the heart of the Father. His desire is to meet our every need, providing everything for us, yet asking for nothing in return except saying, “yes,” to Him. He has gone before us and made His petition known when He died for us on the cross. When He sees us He says, “This is My child. He belongs to Me. What I have will be given to him.” And our inheritance? We will inherit the Kingdom of God and live forever with Him and all of those who have gone before us.

What a glorious day that will be.