It’s Noveeeeeeemmmmberrrrrr! And in our house, that means “Jingle Bells” plays on Pandora. The Grinch plays on the TV. And red and green and glitter and gold start to pop up around the house. Yep, my friends. I’m one of those. We still enjoy the other fall holidays and traditions, so don’t hate, but Christmastime is hands-down my fave, and I stretch it out as long as I can.

One of the reasons I think I love this time of year so much is because I had such memorable childhood Christmases. My mom went all out with no fewer than five snowmen and/or Santas in every room of the house, and had a tray of homemade cookies for every person she knew. She shopped year-round with a meager budget, ensuring my sister and I woke up to a pile of gifts that engulfed our tiny living room.

And another reason? Probably because I grew up during THE BEST decades of the 20th century. And if you disagree, I have just one thing to say: Mariah Carey’s Merry Christmas album. Boom. That’s it. Hands down there is no better holiday music and I will fight you over it.

But Christmases in the 90s extended far beyond the glory of “All I Want for Christmas is Youuuuuuu…” They were totally awesome for so many other reasons. Let’s take a walk down memory lane, shall we?

If you were a 90s girl, you may have loved N’Sync more than you loved Mariah, and that’s cool. So throughout the holiday season, you may or may not have also popped their Christmas album into your Discman. Or 98 Degrees. Or Hanson. Or all of the above while you wrote out your wish list.

And that list likely included the Dream Phone, a Tamagotchi, and, if you were aiming super high, your own VHS recorder. 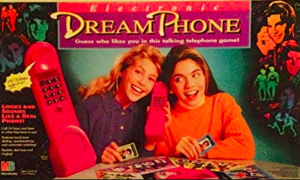 Other possible wishes likely included a Bop-It and a Furby. Maybe you had a brother who prayed to the Santa gods for a Playstation but also thought a Super Soaker and new Game Boy would be rad.

Or maybe you had annoying little siblings who really wanted Tickle Me Elmos and Beanie Babies, and your mom probably came home exhausted with a black eye after fighting someone named Carol for the last ones on the shelf.

In the end, if you just got the jeans you wanted from Abercrombie, or a gift card to Abercrombie, or really just any reason to go into an Abercrombie, your Christmas would be made (even if you ended up buying most of your stuff on sale at the Gap like your friend Brittany did.)

If you were a 90s girl, you were probably suckered into watching Home Alone (again) and The Santa Clause (again) while everyone crammed onto one couch and ate cheeseballs or maybe some Danish butter cookies your aunt sent over in a Santa tin. And your whole family would laugh hysterically when that one bad guy gets whacked in the face with the iron and your younger brother walked around throughout December saying “Keep the change ya filthy animal!” Ugggggghhh. Every year, right? But halfway through, you’d find yourself laughing, too, and realize that your family’s not so bad, especially if they let you watch the hotness of Jonathan Taylor Thomas in I’ll Be Home for Christmas next or Tim Burton’s The Nightmare Before Christmas in the basement with your friends that weekend.

But you also knew your younger siblings would get to pick next and they’d fight over the Muppet Christmas Carol and Mickey’s Once Upon a Christmas, and your mom would have a turn and she’d totally pick some romantic comedy that makes like zero sense like While You Were Sleeping.

The best thing about 90s Christmases though was that we all learned the real meaning of Christmas from the families who told us the truth—the Tanners. And, if we missed TGIF because we were at the mall looking for a new Christmas outfit at Contempo Casuals or Limited Too, the Saved by the Bell cast would likely deliver a similar message the following morning.

And, since 90s kids watched real, actual TV because we didn’t have Minecraft or Fortnite or YouTube to watch Ryan’s Toy Review, we also got to experience classic Christmas commercials like the one with Hershey kisses dancing to “We Wish You a Merry Christmas”, or the one with a bunch of polar bears drinking Coke, or my all-time fave—this Campbells soup ad. Man, our kids are missing out!

90s Christmases rocked. They really did. There was no joy greater than circling what you wanted or folding the pages of catalogues that came in the mail and hoping Santa would bring you that Doodle Bear or those roller blades or the Talkboy tape recorder Kevin McAllister used to scare away the robbers.

90s kids were forced to soak in the magic as we got dragged to the mall with our parents to shop for a gift for Grandma at Sears. 90s kids didn’t have the Elf on the Shelf or Amazon wish lists. We had advent calendars with tiny doors we got to open every day to reveal . . . well, not much of anything, really. But it was still exciting. Also, we had this tree, and we fought over who got to plug it in every night. 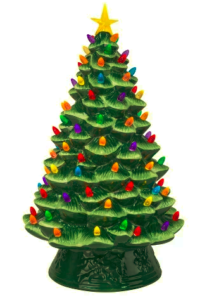 And on Christmas day, the 90s kid would then go over to Grandma’s to give her the new tablecloth or CorningWare your mom bought and you’d have to eat pot roast, but at least you knew Grandma would sneak you a few Ferrero Roches and maybe a macaroon before you opened the new reindeer scarf she knitted to match the reindeer hat she made last year.

And you’d say thank you and promise to wear it. Because it was Grandma.

Honestly, I wouldn’t trade a single one of my 90s Christmases for all the modern technology and Justin Bieber and Michael Buble holiday music we have today. I still blast Mariah. I still get my kids advent calendars. And I still drag myself to the mall, just to walk around. So there’s no more Sam Goody or Sharper Image. In fact, as malls die, there isn’t really much of anything anymore. But part of the magic of the 90s Christmas was having to go out into the world and interact with other people. It was about standing in line behind a mom writing a check and putting her kids’ gifts on layaway. It was about wanting that Abercrombie sweater and knowing you’d probably get the JCPenney one instead. But that was OK. Because choosing the JCPenney one meant your parents probably could afford to get you the Dream Phone after all. And it was totally worth it.

I may not have a Discman anymore or a ceramic plug-in tree, and my list may include things like “new towels” and “Kohls leggings” now, but the magic and memories of my 90s childhood are still there. And for that, I am grateful.