I’ve wrote about my nice little country school experience. However, my transition into “town school” was not as nice. I had friends that lived in town, but I never really fit into the groups that had already been established by middle school. Through the years I took on my fair share of bullying. I remember begging my mom to not make me get out of the car and go into school…because there were several kids that were calling me a “dog” and barking at me as I went in. That went on for weeks. One time I went into the bathroom at a dance and they stacked up so many chairs that I couldn’t get out. At another dance, I remember being surrounded in the dark and everyone took turns calling me names and yelling at me. Add those things to the normal name calling and picking on me during the school day, and it was enough to cause a lot of stress in my young life.

I ended up going to a counselor, and she gave me the idea of carrying around a pen and paper. Whenever they would start teasing me, I would write it down. It took about three days to freak the kids out, and they finally quit. It’s not that the bullying didn’t happen from time to time, but at least it wasn’t as bad as it had been.

Fast forward about 20 years, and now I am sending my disabled daughter into a huge public school system. Talk about terrifying. Alexis at home is very different from the Alexis at school or out in the community. Alexis at home talks loud all of the time, she’s happy, and interacts with her environment. Alexis at school looks a little glazed over. Her body doesn’t move quite the same. She talks quiet, and she does not engage with people the way we know that she can. I knew she couldn’t defend herself and I just prayed that she would find someone who would.

One of the best things that happened to Alexis while she was in Kindergarten is that the Kindergarten class gets assigned a 5th Grade Buddy. Alexis was assigned to a wonderful girl named Abby. A couple of times a month the Kindergartners and 5th Graders would get together and work on a project. I knew that it was a hit the first time that they did it. Alexis was very happy to tell me about her experience. She was thrilled the first time that she got to point out Abby walking out of school.

Older kids always seem to do a little bit better with Alexis. They have patience when she talks quiet or repeats the same things over and over. I figured that it was a nice mentor thing for the year, and it was. However, it turned out to be more than that. Alexis liked to seclude herself at recess if there got to be too much action or it was noisy. Abby and a couple of her friends (Maya & Mimi) took notice, and would spend time sitting with her and talking. As a mom, I was so thankful that she wasn’t by herself. 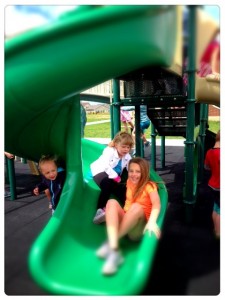 The girls took it a step further and sent home their phone numbers and email addresses so they could get together with Alexis this summer. I thought that it was really nice, but didn’t expect much of it. Then they texted me & planned a trip to the Lincoln Children’s Zoo. It ended up being the best playdate that I have ever had. The girls were comfortable helping her walk and sit. They gathered their money together and bought her a penguin. They took her on the train and I watched. It wasn’t work, I didn’t have to apologize for being too slow. It was just plain fun. 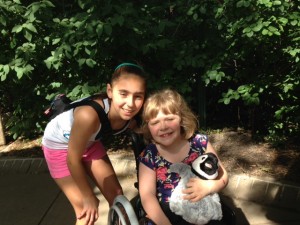 It’s really hard for people to understand disabilities. You don’t want to ask what is “wrong” because you don’t want to offend anyone. And because it makes people uncomfortable, a lot of times the solution is to just not interact. I’ve got a couple ideas that I want to share.

If you want to strike up a conversation with a person who has a special needs child, the best thing that you can do is ask normal questions. “How old are they?”, “Where do they go to school?”, “Do they have activities that they like?”. The best thing you can do is NOT point out the “differences” in their child. If you are at a park, and you have a child that may do well with their chid, you could always say, “Can I introduce my child to yours?” “Is their something your child likes to play? Maybe I could get my child to join in?”

Depending on how my conversation is going, sometimes when I am talking to another parent with a child who clearly has special needs, instead of saying, “What’s wrong with her?” or “What happened to him?”, I say, “Does your child have a diagnosis?”. If a parent wants to share more after that, you will know. Most of the time, I am happy to educate others on what a brain injury means. Again, I am not every parent, so feel your way through the conversation.

I also understand that not everyone is going to have a connection or be friends with every single person on the planet. However,if you have a kid that has a special heart, or a lot of understanding…encourage them to include kids with disabilities. Sometimes the best thing to do is have them ask, “Is there something you like to do?” Most likely the thing that they “like” is also something that they can do independently and is easy for them.

Alexis wants to be independent. She wants to do what everyone else does. Abby, Maya, and Mimi gave her a chance to feel normal this year. To me, that is priceless. 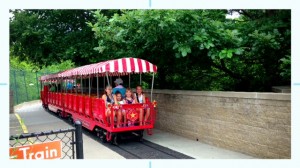