An Unknown Future… But A Known God

“Never be afraid to trust an unknown future to a known God.”
– Corrie Ten Boom

The past few weeks have made these words come to life for me. There were times where my family’s future seemed very much unknown and scary. But in the middle of the unknown, God made Himself known to us.

It all started for us on September 24. Malachi, our ten-month-old son, woke up sick. He ate a few bites of breakfast and threw up. He seemed really tired and kind of pale, so I assumed that it was a stomach bug and would pass in a day or two. My mom and Sam’s mom both stopped at our house that afternoon. They looked at Malachi and gently suggested I take him to the doctor to get checked out. This doesn’t seem like a ‘normal’ sick, Rachel. He doesn’t look right.

That put a knot in my stomach. My boys have both had remarkably good health their entire lives. I had no clue how to process the fact that Malachi might really be sick. Our wonderful family doctor worked us into his schedule immediately. He took one look at Malachi and said that clearly there was something wrong in his little body. He did an examination and then sent us to the hospital for blood work to try and find an answer. Malachi had his blood drawn and then we went home. My husband got home from work shortly after and we both wondered what would happen… was Malachi really sick? Would they just give us a medicine to fix the problem?

Our doctor called us and told me to take Malachi to the hospital immediately. His hemoglobin and platelet levels were dangerously low and he needed medical care right away. He also said that there was a strong possibility that we would be sent to Omaha Children’s Hospital the next day to see a pediatric hematologist. I hung up and broke down. I tried to tell Sam the details through my tears. We prayed for Malachi, and then I started packing. What will I need? How many days should I pack for? Where will we even be?

Isaiah, our 2.5-year-old son, followed me around cheerfully asking questions. I tried to answer him but kept breaking down. I was so scared.

We took Isaiah to Sam’s parents’ home and then went straight to Mary Lanning. What is happening? Is Malachi dying? Am I about to lose my son? We got there about three hours after I had first taken Malachi to the doctor’s office. My mind was swirling with how fast everything was happening. We were admitted and taken straight upstairs to the pediatric floor. He had another round of blood work done, which was a long process. He is a little guy with tiny veins and that was compounded by dehydration. They had a hard time drawing his blood and had to make several attempts before getting a sample. Next came trying to get an IV in those same little veins. This took four tries: his left hand, his right hand, his head, and then back to the left hand where they were finally successful.

Our family doctor put us under the care of another pediatrician. We trusted our family doctor and were thankful for his humility and wisdom in making this decision. The pediatrician consulted with us after Malachi’s IV was finally in. Malachi’s lab results showed that his hemoglobin was 4.3 (normal is 11.7-16.4) and his platelets were 23,000 (normal is 150,000-450,000). I think he has an E. coli infection that has been causing blood loss. But we need to rule out other possibilities. Leukemia. Meningitis. Pneumonia. Just hearing the word ‘leukemia’ in connection with my baby boy rocked my world.

Malachi had a CT scan to rule out bleeding in his brain (thank God, the scan was clear) and began receiving transfusions (one packed red blood cells and one platelet) later that night. The pediatrician put him on oxygen overnight as well, since his hemoglobin was so low. Our first night in the hospital was a rough one. Malachi did not like the oxygen tube in his nose and that kept him from sleeping very well. Sam and I took turns sitting in the recliner with him, trying our best to help him be comfortable. 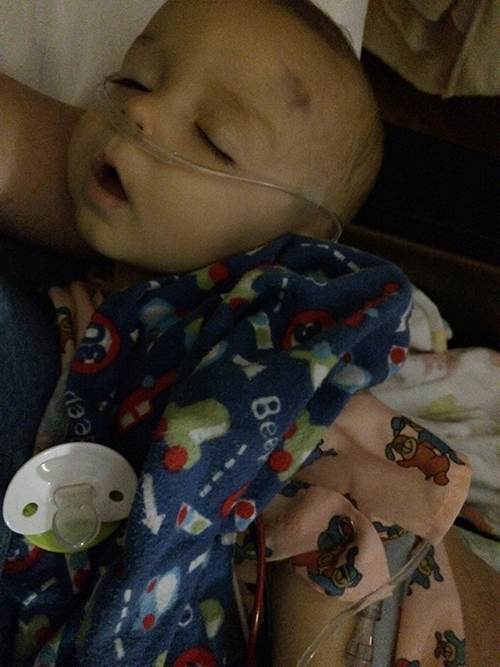 The next morning started with another blood draw and a battery of tests. He had an abdominal ultrasound to check his organs, a chest ultrasound to check his heart, and an x-ray to check his lungs. All of those results came back clear (another praise!). They also took a stool sample to test for bacteria. Malachi’s lab results showed a significant improvement in his hemoglobin and platelet levels, thanks to the transfusions.

We were encouraged by the good results, but still holding our breath. The lab was doing a blood culture to see if there was any infection in his blood, which could indicate leukemia or meningitis. Blood cultures take several days to complete and I just wanted to hear that Malachi’s was clear. Later that day, our pediatrician told us that Malachi’s stool sample tested positive for E. coli and he was being diagnosed with hemolytic uremic syndrome (HUS). An E. coli infection was basically destroying his red blood cells internally – which is why we never saw him lose any blood, even though his levels dropped so drastically. Being young actually worked in Malachi’s favor and gave him a much better chance of recovering fully. HUS can cause kidney failure and patients can end up on dialysis. We thanked the Lord that Malachi’s organ function was not harmed during his infection. 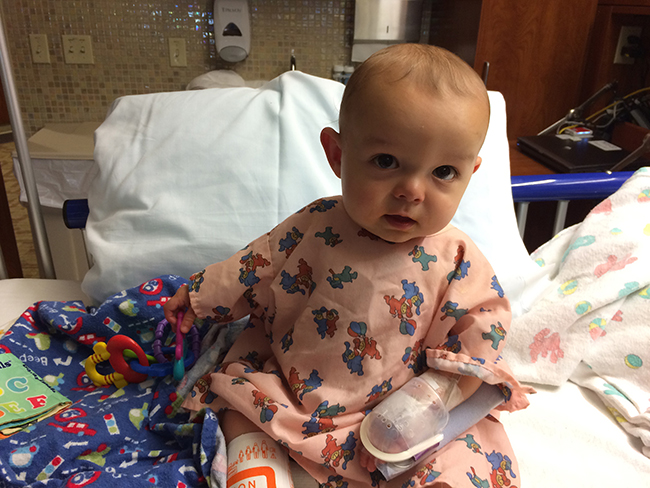 Malachi’s prognosis was good at this point. He would remain at the hospital for observation, but the E. coli would clear up on its own now that he had better hemoglobin and platelet levels. It seemed like the worst was over. We didn’t know at that point that there was another reason for Malachi being at the hospital…