I run because I GET to..

Hey moms! I’m the lady who stares at your toddler in the grocery store for a little too long. I’m also the lady who lunges for your kid on the playground if they look like they are off balance. It’s not that I want to take your children, I just can’t get over how easy it is for them to move around.

Alexis moved with ease once. Like most parents, I was thrilled when she rolled over, sat up, crawled, and pulled herself up on furniture. I LOVED watching her walk around our house carrying toys. She could hold toys with both hands and walk. She could drink from a sippy cup while walking. I know, I know, for most people that seems pretty normal. It was normal for me too. Now it is not.

And I can’t stop watching the kids who can.

When our bodies work right, it’s a beautiful thing. Just think about it. All of your toes are keeping you balanced, your stomach muscles have to be turned on, your legs are firing the right muscles on and off at the right time. You are probably using your eyes to see where you are going, maybe you are talking, or taking a drink. That means you are using your throat muscles and muscles in your face, and they are all working at the right time too. Do you get my point? It’s hard. Moving a body is hard, especially if your brain has the signals all mixed up. That is the way that Alexis has to move her body every second of the day. Which motivates and inspires me for what I am about to say next.

It’s something that I love to do. I use it for two things, sorting out my thoughts and being able to not feel guilty about eating pizza three times a week.

My fastest half-marathon is STILL Seattle in 2004.

I was hoping NOT to write that sentence today. You see,  I just finished the Lincoln Half-Marathon and my goal was to finally beat my time in Seattle. I knew it was going to be close, but I really wanted to beat that goal. It’s been a long time coming.

I ran two “halfs” and one “full” before Alexis was born. I ran the “baby-weight” (a.k.a. milk shakes and pizza) off by training and running another full-marathon a year after she was born. So when she got hurt, I was still in “marathon” shape. But that didn’t last long.

I remember trying to run while Alexis was in ICU. Brandon and I went out and got about 3 blocks before I was out of breath and couldn’t move. I walked back to the hospital room. I tried again about a month later when she was at Madonna Rehabilitation Hospital, I think I made it a mile. I just couldn’t breathe. I can still feel the sadness of those runs when I write about it.

It was just one more dang thing I loved being taken away from me.

Running went from something that was soothing, to something I dreaded. All I thought about was Alexis, her struggles, my struggles, our families’ struggles. I was exhausted, my back hurt, and I was packing on the pounds quickly. Sometimes I would get a mile or two out, and just stop and cry. Running sucked. But I kept going back-sometimes a day later, sometimes a month in between each run. But I kept doing it.

Because I had relentless friends. One who emailed me saying that she was going to get a group of people to run in honor of Alexis. We all had shirts that said “I run so that someday Alexis will too.”  Ultimately, we raised over $5,000 for the Alexis Verzal Children’s Rehabilitation Hospital.

Another friend was willing to run with me at a snail’s pace for 16 miles, training for a race she wasn’t even running in. This was also the same friend who talked me into running the Omaha half-marathon, and cheered (yelled) me on for the last 4 miles when I wanted to quit. For three and a half years I wanted to put away my running shoes, and these friends never let me do it.

I didn’t beat my goal last weekend. I was 3 minutes off, but it is OK. I am now 13.1 miles closer to being myself again. I don’t run to burn calories anymore.

I run because I GET to.

I run for Alexis, because she runs a marathon every day. When I get tired, I think about how I cheer her on to put one foot in front of the other. I run because I have learned that reaching goals take time, and that there isn’t anything that comes easy.

Each of us has activities, hobbies, or passions that help define who we are. There may be times when we lose it or it gets taken away. It may be an uphill battle to get it back, and then you may turn a corner and realize there is one more hill to go. I’ve learned no matter what it is, you just need to put on your running shoes and go (or surround yourself with people who will put them on for you!).

Read all posts from Tiff on Her View From Home. 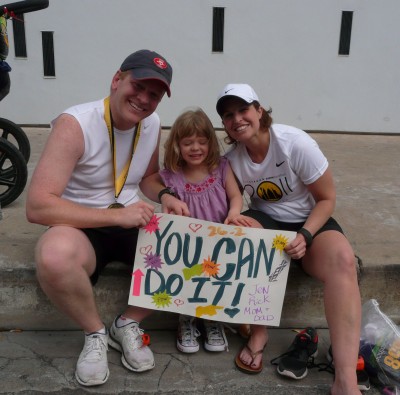