It’s a question every parent asks at some point, “What happened to my baby?” For months, you look at the chubby cheeks and thigh rolls, and smile at the sounds of your child cooing. But then, in the blink of an eye, your little baby is no longer a newborn. Instead, she’s walking and talking, with no sign of that precious baby face. While my micro-preemie still looks young at nearly 2 years old, it recently hit me, she’s no longer a baby.

I’ve been lucky. Our surviving triplet, Peyton, was more than 17 weeks premature. At just over a pound at birth, Miss P has been growing in slow motion. She didn’t start crawling until nearly 17 months old and she didn’t take her first steps until 19 months. At her one year birthday, she was tipping the scales at a whopping 14 lbs. Time has been on my side. Our miracle child is giving us the extra “baby” time that so many parents long for. 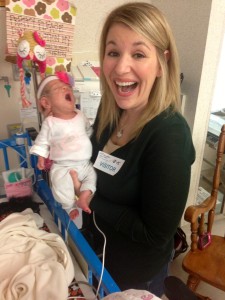 I have to chuckle when I think back to Peyton’s early days. She spent nearly 4 months in the Nicu, and each day, I would long for the scale to show a few more ounces. I would pray that her lungs would mature, allowing doctors to turn down her oxygen. And I would quietly whisper, “Come on Sis, let’s grow and get out of here.” Once she was home, I couldn’t help but wish for her to grow up. Being 4 months premature, Peyton is on her own agenda. She’s behind developmentally and still looks tiny. I see other kids her age talking and running, and I look at Miss P wondering, will she ever catch up?

For close to two years, our lives have been consumed by doctor visits, hospital stays and too many therapy appointments to count. Keeping track of everything can be exhausting and watching Peyton try so hard can be emotionally draining. So it’s no surprise that I completely missed that transition from baby to toddler. It’s a complete transformation. Our little girl is now on the move non-stop, climbing on couches and trying to open doors. She doesn’t say any words, but she is babbling non-stop. Not the baby babble, Peyton now has full conversations with us in a gibberish language. And because she can’t say words, she has picked up sign language, telling us exactly what she wants to eat, even showing off her manners as she signs please and thank you. But the most noticeable difference is Peyton’s look. She shed her preemie face after a year, and now, she has shed that coveted baby face. Peyton now looks like a full-fledged toddler. She’s stronger, standing tall and sturdy as she explores new things every day. And somedays, she looks even older than her age. 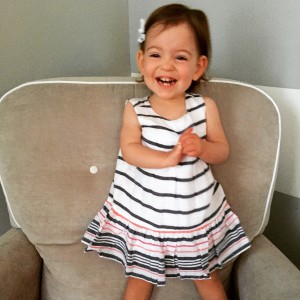 As I take her daily picture to send off to the grandparents, I can’t help but smile at the transformation. Two years ago, I would never have imagined that our baby would be leading a “normal” life. Sure, we’ve had our challenges and we will continue to face some developmental battles, but I’ve stopped trying to speed Peyton up. They are babies only once and I need to cherish every little moment. So instead of hoping for her to get bigger, I’ll wish for time to stand still, so I can bask in the beautiful toddler that Miss P has become.