When we were little, the Christmas tree didn’t get picked until the middle of December. There wasn’t an urgency to decorate like that of today. Thanksgiving, my birthday and a few holiday parties occurred before the perfect tree was found.

I loved the anticipation of it all.

We often went to a tree farm nearby but I have memories of us trudging through our pasture trying to find the perfect evergreen, too. I’m pretty sure that was the year Dad left it outside just long enough for a few cats to mark their territory on its branches.

The smell wasn’t as festive that year.

It didn’t matter where the tree came from. As long as it was real with twinkling lights, it was magical to me.

Over the years, I’ve become a bit of a tree snob. Admittedly, we spend too much money on the perfect one each year. Yes, that is my fault. Kyle thinks we should spend money on a tree once and then keep it for years. I disagree.

I did compromise a bit this year. Since we are moving over the holidays, we thought about bypassing the whole tree thing all together. When that seemed completely wrong, Kyle thought of the next best thing.

Since we’re closing on our home in just a few weeks, I realized his statement had a lot of truth to it.

“Fine,” I told him. “But where will we get a real tree for that cheap that doesn’t look like the one on Charlie Brown’s Christmas?”

The parking lot isn’t a strange title for a festive tree farm; instead it’s just a parking lot – with a car wash. Nothing says Merry Christmas like a clean car and a cheap tree.

I had a little too much pride when we pulled in there. I was skeptical. That’s usually what happens when you judge things before you get to know them.

Eventually we found one. It was fairly large, the needles weren’t falling off and it was marked at under 35 bucks. Kyle being Kyle tried to talk the guy down from 35 bucks to 30. It made me want to hide in the car wash.

The tree guy assured us it was the freshest tree in town. “There aren’t many tree like this,” he urged. “It was just picked! Worth your money!”  For a moment I felt like this guy was trying to sell us a used car.

We paid full price and watched them tie the tree on to the top of my tiny car. It’s the same car that hit a trash can and a large rodent a few weeks back. No – I still don’t have the mirror or the front fog light fixed. Thanks for asking.

When we got home, it was a mad hunt for the decorations. Last January when we moved into this rental, we were just sure we’d be in the new house by summer and packed all the holiday stuff on the bottom towards the back.

That was a mistake.

I finally rummaged long enough to find one box of decorations. This box held my plastic tin foil cup and the scented cinnamon applesauce heart we made as kids. It held each of the girls’ first ornaments and the little red car Kyle received in high school. It was a good box to find.

As we hung up the lights and placed each memory on its branches, our parking lot tree came to life. It leans a bit to the left but if you stand in one spot it looks pretty straight. And maybe the most miraculous of all, 2 and 1/2 weeks after we first placed it in its stand – hardly a needle has fallen. It is by far the freshest tree I’ve ever owned.

I’ve had many favorite trees in my 32 years, but I’m pretty sure this one – with all its perfect imperfections is my favorite. Sometimes the most wonderful gifts are found when you least expect it – even if the parking lot tree guy tried to tell me so. 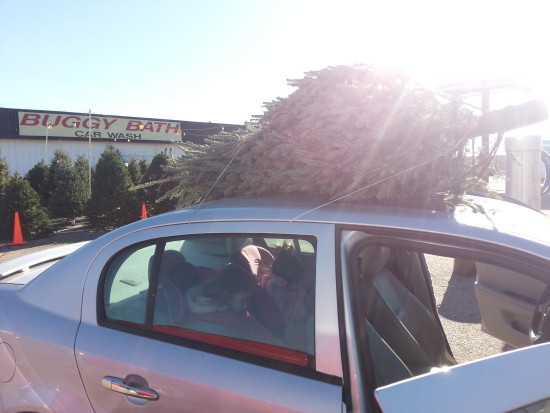