Sir, you are completely wrong in your crusty article (scroll below to find the original piece). You speak of olden times being golden and a better way of parenting, but I see that archaic treatment of children as second-class citizens as selfish parent bullying verging on neglect, thereby silencing children to a voiceless nameless stature. Modern parenting talent comes from ensuring the importance of marriage while teaching children to respect without belittling or making them feel insignificant.

Modern parents don’t have to rank a hierarchy of importance to birth respect from kids, we just need to teach our children.

I am not a millennial generation mom and I am not a parent of grown children either; I am in between, a mom in my forties married with three children aged teenage and younger. I am offended for the millennial parents because you lumped them all into a careless mindset with no regard for teaching their children respect, as parents who don’t care about their marriages. In your article, you insist millennials put children first and that will make their children entitled which in turn also means their marriages aren’t important.

That is simply not true.

Don’t lay a blanket statement on all the millennial parents. There will always be the parents who take child focus too far and don’t command authority. Their children will be entitled brats who do not grow up to contribute positively to society, but that has always been the case. It’s not new to the millennial generation.

Making a marriage priority doesn’t have to mean children last. I backpedal and say you are correct when you say children thrive because of a stable family. However, they don’t thrive because marriage is first and kids second; family as a whole should be first, marriage and kids as a part of that. I’m not arguing parents ignore their marriage for their children, quite the contrary, but the marriage as part of the family and there is time for all. More like a pie chart, then a hierarchy. The pie chart slices change shape as the child grows and needs change.

Back in the time you are making sound so shiny and perfect when kids were second-class citizens is not the way to go. Back in those ancient times children did not always have a voice.

Children should have a voice. Today’s parents know this because we’ve learned from the past what not to do. Children should know they are important and of value, and not be shoved off to go sit in the corner silent like the davenport sofa while the parents talk and frolic amongst themselves. My grandma used the term davenport sofa. I use davenport sofa here because it’s archaic and from the early 1900s, just like your point of view.

However, I backpedal again and agree with you on this, it should be clear parents are in charge. As a mom in her forties, I value family. Our family is a unit, not a harsh hierarchy. I’m a mom and I will not bully my children into a level of less importance. My children participate in sports and extra-curricular activities, we go on vacations, heck we have a swimming pool, but our kids know my husband and I are in charge because we teach them that reality.

Treating children as important individuals does not make them entitled. Preventing entitlement is all in how a parent raises their child, not because the parents slot their kids as less important than themselves. Just because modern parents engage their kids in extra-curricular activities does not mean the parents are making their kids into little entitled monsters or that their marriages aren’t a priority. That is a crap blanket statement. Some parents will take extra-curricular activities too far, I agree here. Don’t make assumptions for the rest who don’t do this.

Do you know why things are different in parenting today? Because the old way of belittling children didn’t work and it doesn’t work today. It’s a different world. I’m speaking as a wife and mother here. Family is important, kids are important, marriage is important. I’m not listing them in any order making a hierarchy, but I’m suggesting it be viewed as a pie chart instead. It’s called time management, Sir.

A family need not be a dictatorship. A family is not an army or a company or a classroom. My husband and I don’t have to put marriage on a pedestal to command respect. Parenting is a verb and we need to DO it, not have kids sitting on the outside looking up at a marriage on a pedestal, but as a family as a whole; where kids matter too but with parents in charge. We don’t put our children on a pedestal either but they are at the forefront.

“Children should be seen and not heard” is a nauseating phrase from back in your day. It doesn’t fit in parenting today. Denial of a voice as being treated as a second-class citizen steals from self-worth, it doesn’t add respect. You are wrong. We don’t have to smother our kids with our own self-importance for them to respect us.

You have missed key factors like how slotting children to second-class citizens fuels the fire for low self-esteem, bullying, rebellion, angry lash outs, and even depression. Every piece of attention and inclusion of a child in the family is important and yes, children should be at the forefront of families; they are the future.

Writing as a grown woman who suffered severely from low self-esteem as a child, I know children need to be valued, be given a voice that will be heard. My parents did let me have a voice, they did not parent me as a second-class citizen and I did respect them, yet I knew they were in charge.

We need to teach children they are significant so they don’t become lost in self-doubt, low self-esteem or even worse become a victim of suicide. With so much information streaming into our children’s lives from the internet, social media, and tv, this means we need to focus even more on our kids to teach them they are of value. There is more respect learned by kids from hearing all opinions and allowing others to have their own opinions rather than telling kids they are less important and second rate.

You are confused. Recognizing kids as important, allowing them to have a voice, and solidifying they are of value does not mean you are teaching them to be self-entitled. My lucky children do thrive because of our strong family and marriage; this does not teach them to be entitled if we are doing our job as their parents to teach them we are at the head of our family.

You may address those families who do encourage entitlement, but don’t blanket the entire millennial generation, or my generation for that matter either, with your erroneous statements. A blanket statement like yours is offensive and wrong. The difference between your generation and parents now is that we don’t bully our children into submission. Children do deserve the status of utmost importance because we know belittling and disregarding them fuels low self-esteem and low self-confidence. These feelings lead to failure.

So, kindly and with the utmost respect to your career and credentials, please shut up and keep your old crusty blanket statements at home in your own house. Fold them up and put them in the closet where they belong and stop airing them to today’s parents, those dictatorship ways of parenting don’t work. Fear doesn’t work. Ignoring doesn’t work.

How do I know? Because I am a modern parent in the trenches of parenting today which you are clearly not.

You are right again though, America doesn’t need a generation of irresponsible entitled people who don’t strengthen a community.

Otherwise, you’ve got it all wrong. Try writing about your own peer group, might fit you better. 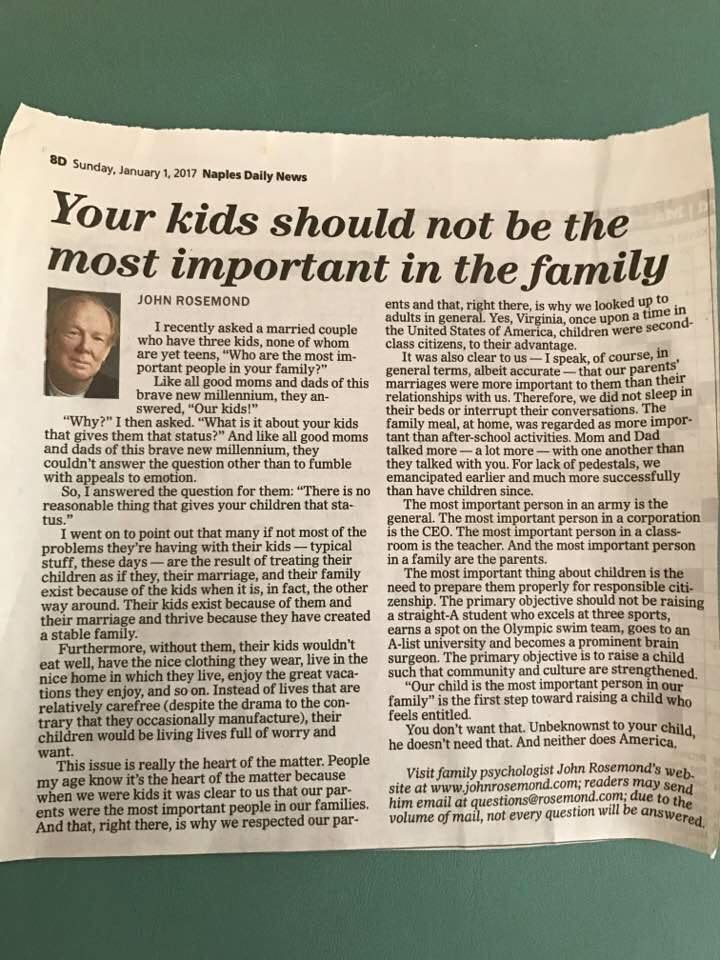