Everybody has something dark in their past which has changed them. Every person has something they don’t like talking about because it’s just too hard. Something that changed them completely. Well, today I am going to write about my dark story and perhaps make myself feel better about this topic. Trigger warning ahead.

It’s a terrifying word to me. I hear it and my insides turn. I become very uncomfortable and scared. That’s because I am a rape victim. Typing those words makes me feel ill still. And no, I am not one of those people who is like “I am a survivor, not a victim!” I applaud those women who use those terms- but those words have never felt right for me to say. I was victimized and forever changed. I am writing this because women should know it is okay to talk about what happened to them, I didn’t do anything wrong and therefore I won’t be ashamed to talk about it. This is not who I am; I am not the ‘girl who got raped’. I also need to get it out of my head in one spot and log it away forever. As a mother now- I will raise my daughter knowing about this topic and the evil behind it. Not to harm her, but to protect her.

I will not be using names in this story, perhaps you know him and maybe you are friends. And that my friends, would leave the door open to question what I have to say with he said she said. Frankly, I am done with that. Going to trial and having each and every detail questioned or blamed on me is not okay. I know what happened and he knows what happened. So without further adieu, my story and the hardest blog post I will ever write.. 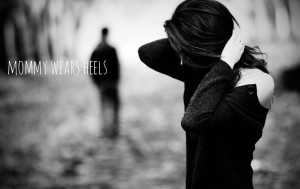 So we have to go back to August of 2009. My parents own a well established family run car dealership in our small town. Mr. B’s father came in to purchase a car one afternoon and couldn’t pick it up until the next day. When he came to pick it up the next day he brought his son, who for all intents and purposes will be referred to as Mr. B in this post. I was there when all of this was taking place and because of our age similarity- I introduced myself to him. He was very tall, had huge biceps and was an MMA fighter, as he told me. We chatted slightly and exchanged phone numbers. I never really gave it a second thought when he left and carried on with my 19-year-old life. Around this point in my life, I had just started a new job and was making new friends. I had just turned nineteen that May and my new friends wanted to go to bars on weekends.

September 12, 2009. My best friend (who remained a best friend for the better part of 8 years) wanted to go out to the bar. We usually went with at least 3 people to feel safer, but this night her room mate was sick. So the two of us got in the cab and took off. On the way there, I had texted a few people asking if they were going to be out that night- Mr. B included.

When we arrived and went inside, he was there.

I didn’t talk to him much when first arriving, just stuck to my friend and drank and danced away. At around 12:30ish, I went outside alone because it was hot inside the bar. This particular location was very close to the cars in the parking lot and people usually stood out in around the parking lot just hanging out. Behind me, Mr. B comes up and places him arm around my shoulders. Reeking of alcohol he was telling me we should go back to his house and watch a movie. I declined and informed him I had a boyfriend and was not interested.

He kept pushing and pushing.

I walked out into where the cars were to deter him and perhaps he would lose interest? I was beside a small silver car and a red van. The red van blocked the view of the bar doors. Mr B. came up and placed his arm on the silver car blocking me in. I started to get scared and again told him I had a boyfriend and wanted to go back inside. His face turned completely and he got a very deep, scary voice and calmly said “..get into the car or I will kill you.”

This wasn’t a drunken guy just getting too hands-y any more- this was real. I tried once more to walk away and he grabbed my arm and repeated his threat. He opened the door and with his hand still on my arm pushed me into the car and slammed the door. I had my cellphone in my hand and I proceeded to start dialling my friend. He walked around the front of the car, got in and grabbed my cellphone.

That was it. I was done.

He took off out of the parking lot at an alarming speed and got straight onto the highway. I knew he didn’t live in town. Hw lived in a small reserve about 15 minutes away. So he drove and I sat crying silent tears and screaming for my mommy in my head. I asked over and over “.. please can we go back? I have a boyfriend! I don’t feel well..” He just kept driving and telling me to ”.. shut the F— up or I’ll kill you and your family.”

We got to his house and pulled up into the gravel driveway. I could see a field behind his house and I thought to myself: RUN. He must of saw me looking because his next threat included ‘burying me in the field where no one would know where I was.’  Which was a true threat! No one knew where I was or who I was with. He grabbed my arm again and pushed me towards the front door. Passing on our way there was the car my parents sold his family. I saw the sticker of their dealership and felt like a little piece of my dad would be there to protect me. Something familiar was there.

He opened his house door and told me to remain quiet. His hand was squeezing so hard I had pins and needles. To this day, I remember the exact floor plan to his house. I can see it when I think about it really hard. The living was straight ahead, with one of those really old TVs with wood around it. The TV had a blue screen on it like a movie had ended. I saw feet of an Ottoman and realized his dad was right there. Relief. This was it. His dad was going to see what a monster his son was and I was going to get to go home. He pushed me into the living room and I soon realized his father was asleep.

This was THE hardest thing for me to get over for myself. Why didn’t I scream to his father? I now know after therapy, Rape victims often don’t react the way you would think someone should in that situation. You just shut down. People have a flight or fight response. I chose to fight. With the flight option, who knows if his father would have even helped me?

I don’t really want to go into the details of everything. That’s not what this is about or why I am writing it. Long story short, I was raped with a knife held to my throat. I was bound to the bed and could not move. My dignity stolen and fear forever put in its place. Afterwards, I didn’t even cry. I was crushed. I complied silently getting back into the car. He drove back to the same bar but parked towards the far end of the parking lot. It was a small car and he was a big guy. He reached across the car and opened the door and pushed me out onto the pavement. He told me simply, “..if I told anyone what he did- he WOULD come after me.”

I knew this was a man of his word, he had just done what he told me he was going to do to me already, what would stop him from doing it again? He threw my cellphone at me that I hadn’t seen since getting into the car. (A detail the defence would later tell me ‘I should have paid more attention too’  at trial.) I watched the car speed away and I ran back into the bar. I only remember bits and pieces past this point. But my best friend told me she spotted me and was relived. She had no idea where I was and she quickly dragged me to the bathroom and into a stall.

I collapsed and told her what happened.

I called my boyfriend and begged him to come get me. We were young and just out of high school and he said he would have to ask his dad if he could come. I told him not to call my parents and to come get me now. I was sobbing into the phone. My best friend called a cab and we went back to her apartment. When the cab pulled in, I saw my parents car waiting right there. That moment was one of the worst moments of my life. Sitting in the back of the car with my father driving to the police station. My bra was torn and kept sliding down my cold arm. Like I said, I don’t remember this much. I think my mind blocked it out. I can only imagine now as a mother myself, what my mother was thinking and it fills my heart with sadness.

So this is already 1500 or so words. I am going to pause it here and complete the story in a part 2. Which will include the ending to this nightmare and the downfall of the Ontario Justice system. If you know someone who has been through a sexual assault, don’t ever question their story. Don’t ever cast doubt or shame them. Don’t let it define who they are to you. Know behind that story, is a terribly frightened person who is embarrassed and broken.

Jennifer used to be a sexy, tattooed 'barstar'/party girl. Now, she is a proud domesticated quarter of a century blogging housewife, with a definite flair for the dramatic side! She's a self proclaimed 'Lactivist' & pro attachment parent mama to Anastasia! Check out her blog at http://www.mommywearsheels.com/