To The Stranger Annoyed By My Son: Age Three Is Wonderful

The other day we went to see a college basketball game at Campbell University. My husband is a second year Physician’s Assistant student and currently on an orthopedic surgery rotation. The doctor he works for is the doctor for the team, so naturally my husband had to tag along “in case” something happened to the players. Fortunately nothing happened and we could enjoy the game from beginning to end.

Our 3-year-old son was enthused and so excited to walk up and down the bleachers, make friends with the mascot Gaylord, the Camel. He ate a warm pretzel and the local fire department gave him a fireman hat. Our boy was well behaved despite the music, game, cheerleaders, and excitement. The afternoon was such a joy!

Sometime in the middle of the game, an older lady sitting behind me leaned forward and asked me, “How old is your boy?” I smiled and replied, “He’s three.” She proceeded to tell me that she was in early childhood education and when she became a grandma she decided that she would be there for her grand-children between the ages of newborn and two and then again when they turned four and then onward. I didn’t quite understand what she was trying to tell me. And I’m pretty sure I must’ve looked at her like “What?” because she went on and explained she just doesn’t care for kids in the terrible age between two and four.

Silence. I processed what she was telling me, but I didn’t know what to say because first I thought: Are you telling me you don’t like my child? Because you don’t know us. Or are you telling me my child is misbehaving? Because he really isn’t. He’s just having fun and you can’t expect him to sit still for two hours when he sees the basketball players run up and down the court and the cheerleaders jump up and down and build pyramids. Or are you telling me you just don’t like your grandchildren? Or all children that age? Or what the heck are you telling me? And while all these thoughts ran through my head there was nothing but… awkward silence! And since I’ve been taught “If you have nothing nice to say, don’t say anything at all” I turned around and never looked back. 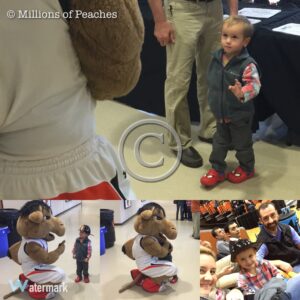 The truth is I think this age is hilarious. I love how curious kids are and how much they want to learn. I love how observant my son is and how much he likes to help me around the house. I love watching him explore things that are mundane to me and brand new to him. I love helping him gain self-confidence by letting him go and discover while I keep a safe distance for just in case. I love this age. It is hilarious.

For example (and I’m sure all moms can relate): going to the bathroom I always have an audience. I try to be discreet, but let’s face it – often I have a child on my lap while doing my business. A child who needs kisses, sloppy ones of course, and a big hug the second I take my pants off and sit on the toilet. And guess what, I let him sit on my lap and enjoy the hugs and kisses, because I’m also a mom of a teenager and an adult and they barely give hugs and kisses anymore, so I am going to soak up the love while I can.

A few weeks ago, I got up from the toilet and my son asked, “Mom, where’s your wiener?” I replied, “Moms have no wieners. Only dads and boys do.” Apparently I thoroughly confused him because he inquired, “You have no wiener?” I said, “Nope. I don’t have a wiener. Girls and moms have peaches.” (We’ve called it that since our daughter was little… I don’t remember why.) Well, that was clearly too much information, because he took half a minute to process it all and then said determined, “No mom, you just have butt!”

How could one not love this age?

I don’t know, but I know one thing for sure: if I didn’t have this little dude around, my life would be pretty boring right about now.

I love him. I love this age. It is hilarious.