“I’m not sure that we should go,” I said to my husband as I tried to keep my toddler, who was rubbing a nose full of snot all over my leg, from taking the wet, clean clothes out of the dryer. “Evan is sick. What if he wakes up in the night?” I asked over the loud beeps and blasts of Jack’s video game.

“This is precisely why we need to go,” he said, throwing his hands up at all the chaos around us. “We gotta get away!”

I knew he was right. And I also knew that going away by ourselves for one night wasn’t going to be a big production. We had our favorite babysitter lined up, and the lake house was waiting for us, just Hubby and me. But we hadn’t told the boys we were going. I was afraid there would be tears and protests that they weren’t included.

On Saturday morning, we told the boys we were leaving and that Megan was going to watch them. They were bouncing off the walls when she arrived, giving hugs and asking her a million questions.

“Good-bye,” I said, standing in the hall with my suitcase, “I’ll miss you.”

“Yeah, bye, Mom. Megan, can we get doughnuts for breakfast tomorrow?”  Four-year-old Colin didn’t even skip a beat.

“Bye, Mom – hey! Why do you have your suitcase?”   A-ha! Six-year-old Adam finally noticed. Cue the emotional breakdown.

I squatted down next to him so I could look him in the eye, “Daddy and I are going away for the night, but we’ll be back tomor-“

“Okay, cool. Megan! Can we sleep in the tent tonight?”  And he was off.

I couldn’t even find eight-year-old Jack before we left, and Baby Evan was already being held upside down and tickled and swatted me away when I tried to kiss him.

Twenty miles down the road, I said to Hubby, “No one even cared that we were leaving.”

I knew he was right.

It’s not as if Hubby and I have never been away together. We have many times, but this one felt a bit deceptive since we were going to the lake house we’d been to as a family all summer long.

That is until Hubby and I jammed to all the classic music we used to love, rather than listen to endless video game noise and DVDs.

And I got to read every magazine I brought, and wiped no one’s bottom or nose but my own.

I cooked no one dinner, and cleaned up after not a single person.

Hubby and I stayed out on the boat as long as we wanted without hearing, “We’re bored! Let’s go back!” 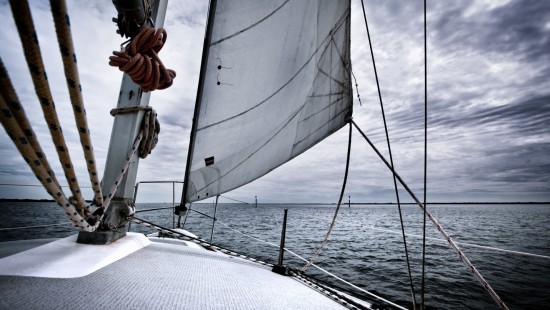 And we ate dinner at that nice restaurant that we had to leave that one time because the boys were being loud and naughty.

We met my sister and brother-in-law and their friends at the park and listened to loud – and free! – rock music until way past anyone’s bed time.

We slept in, the diminishing haze of sleep waking us rather than the cries of a toddler wanting to be freed from the Pack-n-Play.

We tried that fancy brunch buffet that we’d heard about and hopped from one cute boutique to the next without having to worry about wild little boys and strollers knocking over carefully arranged displays.

And we met some old friends for an afternoon drink and boat ride and had actual adult conversation without anyone interrupting.

There were no schedules to keep, no naps around which to plan, no tantrums to try and avoid. Driving home, we kidded each other a little that we missed hearing the “Are we there yets?” and the “I want to play Daddy’s IPad nexts!”

Everyone was asleep when we finally arrived home Sunday night. I was tempted to sneak in their rooms to steal some kisses, but I let sleeping children lie. The next morning the kisses and hugs and the retelling of the weekend’s events were sweet enough.

Yes, there were doughnuts and tents and fruit snacks and a trip to the bouncy place. But not one of the boys asked us what we did, or even where we went.

That’s okay. Because when Hubby left for work, we smiled a special smile at each other. We’ll keep our secret to ourselves.

That will make it easier to get away again next time.

Do you and your spouse go away together without your children? Where do you go and are your kids okay with it?